Forums: History, Dinosaurs, Archaeology, Pseudo-Science, Snakeoil
Email this Topic • Print this Page
1
Reply Fri 18 Feb, 2011 07:51 pm
@Tureskis,
Maybe Gungasnake has one. He collects comics like that.
0 Replies
1
Reply Fri 18 Feb, 2011 09:38 pm
@Tureskis,
Amazon frequently has used copies of old and out of print books.
0 Replies
1
Reply Thu 24 Feb, 2011 09:43 am
there is an obvious clue which everyone overlooks that prove that these have been faked recently.
look at how the dinosaurs have been drawn. the upright posture of the two legged meat eaters. the tails of the four legged ones. all of these are incorrect. they have been drawn in the trend that we used to up untill just recently because we assembled the fossil skeletons incorrectly. we now know the two legged ones actually had their vertibrae more or less parallel to the ground with the tails high in the air, counterweighing the head and necks. the same with the four legged ones.
it is on these facts that i have no doubt in my mind now that these are faked from early books etc.
1 Reply
1
Reply Thu 24 Feb, 2011 10:00 am
@haleo,
You were not there to observe how the animals moved and there is a huge problem with basic logic. The first batches of the things which turned up around 1960 numbered in the tens of thousands. The things are very ornate and a lot of work would go into producing ONE of them; NOBODY is going to go to that much work and trouble on pure speculation, i.e. before it is known whether honkies and gringos would actually pay money for the things.

Somebody trying to start up a business like that would produce two or three of the things and see if they could be sold and then, if they could, try to figure a way to produce the things in larger numbers.

THAT however would leave obvious traces. There would be at least two or three entire villages whose entire populations had gone for at least a year or two doing nothing other than producing Ica stones. It would be very easy for Farmerman or professional skeptics like Michael Shermer to find one or two of those villages, interview people, and put the entire subject to rest. Ask yourself why that hasn't happened...
2 Replies
1
Reply Thu 24 Feb, 2011 10:57 am
@gungasnake,
ok, firstly...to reinforce what in said about the vertibae http://palaeo.gly.bris.ac.uk/Palaeofiles/Frauds/reconstruction.htm . this is why ray harryhausen type dinos have been replaced with jurrassic park type dinos and this proves the carved images are incorrect. it could be forgiven for a few of them to be mis-drawn but all of them???....its obvious.

as for speculating over production well, heh, i could do that till the end of time. how do we know that there isnt 100's of these things already floating around the world sold to tourists prehaps decades before the 60's?...we dont know. how do we know if a large criminal organisation wasnt involved?...we dont. how do we know if they werent shipped off to somewhere else for mass prodiction?...we dont....this goes on and on.

comming in from another angle....do you honestly think the peruvian goverment would let go of millions of £'s worth of national treasure without just cause?.....of course they wouldnt...
2 Replies
1
Reply Thu 24 Feb, 2011 04:17 pm
@haleo,
An excellent point!!. Weve seen the ICA stones all depicting these dinosaurs as tail dragging pot bellied behemoths, similar toOsborne, Cope and Marsh's reconstructions. SO the ICA stoes had to be something of a pre-Bob Bakker period neh?
0 Replies
1
Reply Thu 24 Feb, 2011 04:21 pm
@gungasnake,
Why should I book passage to Chile or PEru to "DISPROVE" your worldview. Its not my duty. Youve made statements of the authenticity of the ICA stones depsite several pieces of sworn testimony. You have now failed to see the point that haleo made. Balls in your court skippy.
0 Replies
1
Reply Thu 24 Feb, 2011 07:44 pm
@haleo,
The problem seems to be what you consider large and small problems to be. To me at least the problem with thinking anybody would ever create 60,000 Ica stones on pure speculation is very large while the question of you thinking a few of the pictures might show dinosaurs in unnatural poses is microscopic. 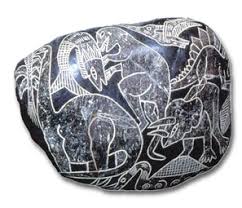 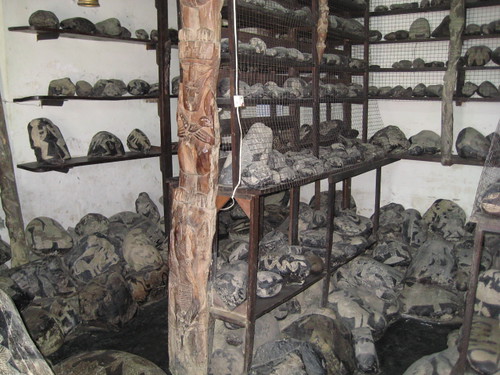 Again the numbers of the things which turned up before anybody had a clue as to whether they could be sold for anything....
0 Replies
1
Reply Thu 24 Feb, 2011 08:48 pm
A better look at the size of Cabrera's collection:

Apparently upwards of 10,000 stones in Cabrera's collection.
2 Replies
1
Reply Fri 25 Feb, 2011 09:20 am
@gungasnake,
'Again the numbers of the things which turned up before anybody had a clue as to whether they could be sold for anything.... '

In the desert of Ocucaje a few kilometers from the original deposit where the engraved stones of Ica were found, I have discovered a paleontologic measure set in sedimentary rock from the superior cretacic period of the Mesozoic geological era. It was here I began looking for fossils in this very rich measure in a systematic way and in accordance with the time and money I had available. On October 14, 1984 I found a section of sedimentary strata in which there was a number of fossilized animal and vegetable specimens from Mesozoic fauna, and flora.

Suddenly and with great surprise, I found part of a backbone - a dorsolumbar with its iliac bones that belonged to a human being similar to the man of our day, nearby were three incomplete heads and fragments of a dinosaur backbone belonging to the triceratops species, close to these I found egg specimens, sections of skin of dinosaurs of different species, and an almost complete skeleton of a phitosaur (archaic reptile similar to the crocodile) equally fossilized!

so, after his stones were debunked, he magically finds remains of fossilised dino and human skeletons side by side? something no other archeologist has done before?...this guy is a liar.
0 Replies
1
Reply Fri 25 Feb, 2011 01:28 pm
In real life, there aren't any shams or scams which involve 10,000 intricate and complex pieces of stone carvings sitting around in a private museum.
3 Replies
1
Reply Fri 25 Feb, 2011 01:41 pm
@gungasnake,
gungasnake wrote:

In real life, there aren't any shams or scams which involve 10,000 intricate and complex pieces of stone carvings sitting around in a private museum.

In real life, there aren't any shams or scams which involve 10,000 intricate and complex pieces of stone carvings sitting around in a private museum.


I have some Salvador Dali prints that were done and signed by the great artist . Then I have a beidge for sale in the EVerglades
0 Replies