Alabama Wal-Marts Sell Out of Ammo

All of the Wal-Marts across Alabama sold out of ammunition as of
yesterday. A reliable source said that one of the purchasers
commented that while Russia may have invaded Georgia , they sure
as hell ain't doin' it to Alabama .
Type: Discussion • Score: 0 • Views: 5,655 • Replies: 40
5
Reply Wed 27 Aug, 2008 09:38 am
@cjhsa,
That's funny!

You're not all bad Cjhsa.

I know for a fact when I went to the Walmart yesterday to stock up they still had plenty. Just got a shipment in as a matter of fact

This news just in:

All of the Wal-Marts across Alabama sold out of ammunition as of
yesterday. A reliable source said that one of the purchasers
commented that while Russia may have invaded Georgia , they sure
as hell ain't doin' it to Alabama .


We Georgians are doing our very best to contain the threat within our borders.

0 Replies
2
Reply Thu 28 Aug, 2008 09:05 am
@H2O MAN,
There are two definitions of the term "Assault Rifle": a functional definition and a political definition.

The functional definition means something which is light and easy to carry arround, for which the ammo is light and easy to carry around, which is just big enough to put a victim out of combat for at least a few months but not so big that recoil interferes with follow-on shots, and it's not even obvious that full auto mode is necessary to meet that definition. My own ideal version of such a thing would look like a 25 - 26 caliber rimfire leveraction rifle similar to the little Henry 22-mag.

The political definition is basically just anything which on a 1 - 10 scale for being scary to demokkkrats, rises above about an eight and a half and that would include the thing in your image.

But, again, to my thinking at least, the ultimate real assault weapon would look more like the little Henry lever-action 22mag rifle which you'd buy on Gunbroker for $250.

I thought you were the gun nut guru. That's a bb gun compared to a barrett... and looks nothing like it.


Barrett does make a rifle with a similar look to it... 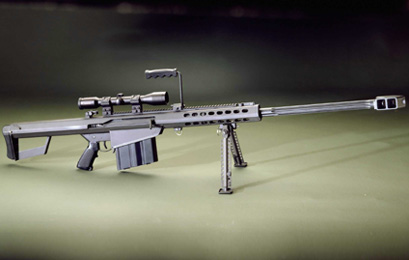 What is the overall length
of that M14 ?

Where do u find theses great pictures
and
how do u post them here ?


All but the Barrett rifles and FAL are from my personal collection of long arms that I have photographed.

Congratulations on some good ordnance.

I have a small collection of handguns n a few rifles.
Do u have handguns ?
1 Reply