I tried those things that pulse some kind of ions (I made that up, don't know what they do) to keep rodies away. They were expensive and did no damn good at all.

got ourselves another mouse -- hopefully just the one.

so we bought a couple of those ultrasonic pest repellers.
plug it in and it emits a high frequency tone that supposedly drives 'em apeshit...

I've had mixed results. It's impossible to know whether they keep the voimin away. But once the mouse is there, I've seen no evidence that the mouse departs because of the noise.

No good sending my black kitty over, Jes would sneeze!

So they can make nice, warm nests?

Izzie, Hoibie left after several weeks. Maybe it was the sound things. If he's visiting jes and reg, they're in for serious trouble. 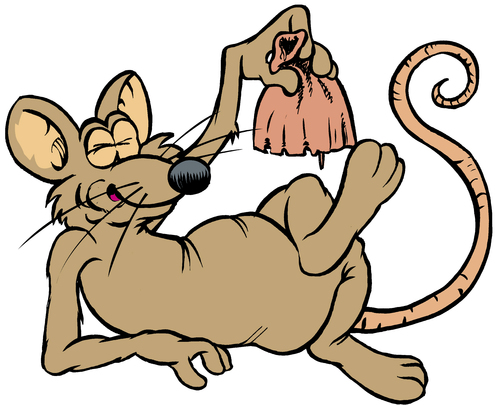 My dad found rats living in his couch. Called an exterminator. Temporarily got rid of the rats, but they moved back in. The second time the exterminator came out, he found my dad working in the garage with the door to the house open.

Exterminator: "So, rats generally gain entrance to houses through holes."

Dad: "Yeah! I've been around the house trying to seal up anything that rats could get through."

Exterminator looks at the door. "That's a pretty big hole, don't you think?"
0 Replies
1
Reply Wed 11 Aug, 2010 02:29 pm
@jespah,
Whatever happened to : "eek, there's a mouse?" Haven't heard that term in ages, and it was once pretty common.
1 Reply
1
Reply Thu 12 Aug, 2010 04:40 am
@cicerone imposter,
Well, what I screamed wasn't exactly eek. It was more of an incoherent string of words that are generally unprintable although the word mouse was somewhere in there as well.

We bought the ultrasonic thingies (and I ordered peppermint oil, due to arrive soon) because about a week ago there was a rodent fraternity initiation going on. As a part of the hazing ritual, four mice (not all at once, so it might not have been a total of four) performed the triangle dance going from stovetop to under the refrigerator to scooting down the pantry hall.

I did not see any fraternity colors, but I suspect there was some drinking going on and if we listened closely, the squeaking sounded a bit like The Sweetheart of Sigma Chi. Then they launched into The Whiffenpoof Song.

The peppermint oil is supposed to annoy them as well, but I'll be fine with it if it acts as mouse deodorant.
0 Replies
1
Reply Thu 12 Aug, 2010 08:55 am
@Region Philbis,
Two to six weeks and I would have had dozens of mice instead of the batch I had..

As I said earlier, I use to see mice waltz around right by them. (I trust they were entering from my yard..)

If you get desperate and actually go for killing the mice, the victor electronic mouse trap is kinder to the human than the snap trap things.
1 Reply