One's pain is not always worn on their sleeve.

Just because you make a lot of money does not mean you SHOULD be happy no matter what..

One would think that one actually said that when, in fact, one didn't.

It could be suicide.

Horribly disappointed and I feel stupid that I'm sad, but I am.

Yeah, that's my reaction too.

Sad, then second-guessing why I'm so sad, but still sad.

Oh, I'm glad to see you guys saying this too. I was feeling kind of silly about how bad this news made me feel, but for some reason it hit me harder than this kind of thing usually does...

0 Replies
1
Reply Tue 22 Jan, 2008 10:17 pm
I'm a loner here, perhaps, with friends of friends not being picked up by emergency system persons, back in the early eighties.


I don't know that all of that has anything to do with this situation.
At all.

That aspect of it makes me terribly sad, too. So far from home!

What's bothered me about this, today, is how fast it was picked up by the media and broadcast, and the erroneous reporting. How did his parents find out, the mother of his child? Through the media? I hope not. The insanity of the media exacerbated a tragic situation.
0 Replies
1
Reply Wed 23 Jan, 2008 02:09 am
In Australia we tend to grant a fair bit of respect for those of us who start out small (being from this very far away, fairly unimportant place) & take on the huge pressure of making it in the "big time", on the world stage. It's certainly not an easy ride, as many have testified. So good on you, Heath, you sort of made it.

Obituary from the ABC news: 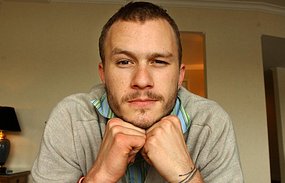 Heath Ledger at the Park Hyatt in 2003 to promote his film Ned Kelly. (AAP: Mick Tsikas)

At the age of 28, Australian actor Heath Ledger's career was already full of success and acclaim.

Police confirmed Ledger was found dead in his home in New York on January 23, 2008.

Born in Perth in Western Australia in 1979, Ledger's first successful move into acting was a role in a children's television series Clowning Around in 1992.

After leaving school at 16, he scored another TV role in 1996 in the series Sweat, where he played a gay cyclist, and a stint in the short-lived fantasy-drama Roar.

He moved on to his first film roles in 1997, appearing in Blackrock and Paws.

He started to capture international attention when he starred in the 1999 teen comedy 10 Things I Hate About You and had a leading role in the acclaimed Australian movie Two Hands.

The film's director Ang Lee hailed Ledger's performance as a "miracle" of acting, reminiscent of a young Marlon Brando.

In the New York Times review of the film, critic Stephen Holden agreed.

"Both Mr Ledger and Mr [Jake] Gyllenhaal make this anguished love story physically palpable. Mr Ledger magically and mysteriously disappears beneath the skin of his lean, sinewy character. It is a screen performance, as good as the best of Marlon Brando and Sean Penn," he said.

Ledger lost the Oscar for best actor in 2006 to Phillip Seymour Hoffman for his portrayal of author Truman Capote in Capote.

Brokeback Mountain went on to win three Academy Awards, including for best director.

The actor was invited to join the Academy of Motion Picture Arts and Sciences in 2006.

In 2007, he was one of six actors to portray different sides of singer Bob Dylan in the acclaimed film I'm Not There.

Ledger's interests in the creative world did not stop with acting, with an emerging desire to direct.

He started a record company with singer Ben Harper and was directing Harper's music video for Morning Yearning.

He had also directed and produced Australian artist N'Fa's work, including his video Seduction is Evil (She's Hot) and Cause and Effect.

In July 2006, Ledger was confirmed to play comic book villain The Joker in The Dark Knight - the sequel to the 2005 film Batman Begins.

Speaking about his role as The Joker, Ledger said it was definitely the most fun he had had with any character.

"He's just out of control - no empathy, he's a sociopath, uh, a psychotic, mass-murdering clown. I'm just thoroughly, thoroughly enjoying it. It's just exceeded any expectations I had of what the experience would be like," he said.

His last film venture was a role in The Imaginarium of Doctor Parnassus, directed by Terry Gilliam. It is due for release next year.

Ledger said the reason he made such different choices with his film roles was because he did not want to "repeat himself".

"I feel like I'm wasting time if I repeat myself. I can't say I'm proud of my work. It's the same with everything I do: the day I say 'It's good' is the day I should start doing something else," he said.

Ledger has a two-year-old daughter, Matilda Rose, with his former fiancee Michelle Williams. They separated in September 2007.

He said becoming a father had exceeded his expectations.

"Matilda is adorable, and beautifully observant and wise. Michelle and I love her so much. Becoming a father exceeds all my expectations. It's the most remarkable experience I've ever had - it's marvellous," he said.

I'm thinking it was probably an accidental overdose. But yeah, it's sad when something like this happens to anyone, but especially someone who's only 28, and seems to have a bright future ahead of them.

If it was an "accidental" overdose, then it's the same type of accident as a heroin addict who gets a strong batch. He's probably going to be held up as some tragic hero in the same way as River Phoenix. The only example he should be held up as is a LOSER. He had wealth, youth and success and threw them all away. Stupid a$$hole can rot for all I care.
0 Replies
1
Reply Wed 23 Jan, 2008 05:09 am
I feel very sad.....he was a very talented young man, and his work touched many deeply.

Especially sad that his little girl has lost a dad,

So why wasn't selfish bastard more responsible? He's gonna be canonized, he doesn't deserve a shred of it.
0 Replies
1
Reply Wed 23 Jan, 2008 05:59 am
Wilso, I'm not sure he'll be canonized. He was an incredible talent. He died, and senselessly, it seems. He was burning the candle at both ends, needed a little rest, and found eternal rest instead of a bit before a massage and then back on the treadmill called life. I admired his acting ability. Certainly it was more than mine! I feel badly that a young man so full of talent died so senselessly! It should not have happened!
0 Replies
1
Reply Wed 23 Jan, 2008 07:03 am
Im with Wilso. He was a lousy self absorbed father. You give up(or at least put on hold) self absorption when youre a dad.
0 Replies
1
Reply Wed 23 Jan, 2008 07:07 am
Wilso wrote:

Especially sad that his little girl has lost a dad,

So why wasn't selfish bastard more responsible? He's gonna be canonized, he doesn't deserve a shred of it.

Canonization is beside the point...that's a dumb fan thing.

If you want to judge him without having any idea of what happened, or what was going on in his life, go ahead.


I don't get the passion this stuff generates....canonization, OR demonization.

One would think that one actually said that when, in fact, one didn't.

Ooh.. I m sorry.
That post was not a response to what you said, rather more of a self rambling that I decided to post.

SOrry about that. I was not trying to put words in your mouth, or argue your point.

Im with Wilso. He was a lousy self absorbed father. You give up(or at least put on hold) self absorption when youre a dad.

None of us knew him personally. There is no basis on which to make any type of judgement.

Isn't that wild??? He was a lousy self-absorbed father??? So, did his baby's mama call and tell you that, Wilso?

0 Replies
1
Reply Wed 23 Jan, 2008 10:21 am
There's some unfortunate stone throwing over a grave (well, a future grave). My, some people are in a bad mood -- keep them away from any sleeping pills or booze. Heath was also recovering from pneumonia, with indications over the years that he suffered from a congenital disease that has never been specified. He was cast in Aussie television and then in films aimed at the teen audience and for a few years presented a sort of rebel image in teen magazines. That seems to me to mirror the lives of a lot of young people growing up in in an urban environment, but also this was someone who had found his way into the entertainment industry and didn't really seem prepared for it. He could have found marriage too routine and boring -- that never happens, does it? There is nothing to indicate he was nothing but a great father.

He was in the midst of developing a career and because of the spotlight falling on his performance in "Brokeback Mountain" was being offered all sorts of roles. I've seen the trailer for the new Batman movie, "The Dark Knight," where he does an entirely new twist on "The Joker," and the upcoming Terry Gilliam film will be anticipated. Gilliam does not hire bad actors.

Although he began with some hunky heartthrob images in movies, I think he was headed towards taking more parts in independent films like "Monster's Ball" (he was excellent in that role as well) and critics who likened him to a young Brando or Sean Penn were not wrong.

The latest news is his initial autopsy revealed nothing which indicates to me that alcohol or drugs, including sleeping pills, were not involved.

The one thing I heard today that just makes me so mad....is that Westboro Baptist Church is looking to picket his funeral because of Brokeback Mountain. Like someone said Jerry Falwell is dead so we dont have to hear about that from him, but how can someone just picket a funeral like that.

He played a "role" and some people may not be ok with it. As for myself, to each his own, whatever makes you happy. I am not one to judge. If this Reverend Phelps's pickets this funeral, it will be just horrible.

Heath's family is trying to deal with the death of their son, brother, husband, and especially his little girl! And someone who hates gays is going to protest. I see so much wrong with this. I am just furious right now thinking about it!!

Heath needs to be able to rest in peace, not chaos from a gay hater! I'm sure you will love the website for this organization.....

check it out at: www.godhatesfags.com and you can click on the top of the page where it states "WBC TO PICKET HEATH LEDGERS FUNERAL"

Its ridiculous, awful, disrespectful and just makes me so mad and sad at the same time!!!!!

If anyone else reads it, let me know what you think!
0 Replies