Forums: Movies, Dvd, Film, Tv, Online Streaming Films
Email this Topic • Print this Page
1
Reply Fri 23 Aug, 2013 09:39 am
@izzythepush,
Fancy French Cider, hmmmm.
I don't imbibe anymore, long ago escaped the evil clutches of the demon drink. he.
Used to like my cider though. oh yeah.
1 Reply
1
Reply Fri 23 Aug, 2013 10:47 am
@eurocelticyankee,
It's a bit stronger than cider, it's my favourite tipple. I still imbibe, but not as much now my daughter is away. I don't like drinking on my own.
0 Replies
1
Reply Sat 24 Aug, 2013 10:03 pm
@panzade,
My computer refused to space that day
0 Replies
1
Reply Sat 24 Aug, 2013 10:04 pm
I watched The Life of Pi over the last 2 days and several thoughts. Was it about religion or about the nature of truth? Was Pi a liar or delusional? Had his experience as a castaway made him insane or made him a pilgrim?

I had other thoughts but I don't remember them.

What I do remember is the movie reminded me of Herman Hesse and how some regard all of Hesse's work as about two aspects of the same person, that two characters are actually aspects of the one character. Are Pi and the tiger one and the same?
3 Replies
3
Reply Sun 25 Aug, 2013 06:21 am
@plainoldme,
I had the same thoughts.

I watched The Life of Pi over the last 2 days and several thoughts. Was it about religion or about the nature of truth? Was Pi a liar or delusional?


Talk about cynical. How about neither? ((shrugs)) I accepted Pi's story as a fantastical journey AKA everything actually happened to the character as he described. Does every fantasy book and movie come down to a delusion of the story's protagonist?

Is Bilbo Baggins some implicit schizophrenic is a mental asylum when he recounts everything that happened in The Hobbit? Or is suspension of disbelief a valid option anymore for adults?

Ably played by all the cast.
JC is convincing. VH is wonderful. 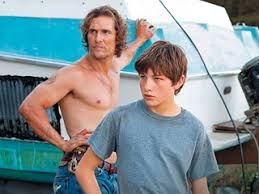 and yes ladies Mat gets his shirt off....again
0 Replies
1
Reply Sun 22 Sep, 2013 12:50 pm
I've just watched the first 6 episodes of 'Under the Dome" but have given up on it and won't watch the final 7.
On paper, the plot sounds like great sci-fi; a dome-shaped force-field drops over a small town sealing the townsfolk off from the outside world, wow!
But the show quickly degenerates into a stupid boring soap opera with everybody seeming to be not too bothered.
Also there's no central hero-figure to take control, Big Jim is the nearest but he's as bananas as his son.
1 Reply
2
Reply Sun 22 Sep, 2013 03:02 pm
@barrythemod,
We watched World War Z last night. It wasn't something I thought I would want to watch but wow, I was surprised. I don't want to say it was great, but it is pulse pounding. I wasn't prepared for the zombies to be so damn fast.
0 Replies
1
Reply Sun 22 Sep, 2013 04:13 pm
@Romeo Fabulini,
Romeo Fabulini wrote:

Also there's no central hero-figure to take control, Big Jim is the nearest but he's as bananas as his son.


I beg to differ on the watchability of Under the Dome. First the final 7 will be the the finishing of season one. The TV series is much more nuanced then the book with its too black and white characters.

I bet in some point (probably season 2) Dale 'Barbie' Barbara will take control over the good side. Big Jim has never been or ever will be a hero in the series. At best, he's an antihero if not an out and out villain like his son has the potential to be. AT least Big Jim has a seasoning of redeemability in the TV series. His book version and even his son were far too annoying (redneck hick obnoxious) and obviously evil that it was difficult to get past them in such a very long book.

0 Replies
1
Reply Mon 23 Sep, 2013 01:38 am
@barrythemod,
Last movie I have watch was on DVD. It's now three months and I haven't watch any new movie.
1 Reply
1
Reply Mon 23 Sep, 2013 03:35 am
@kumkum,
Ahhh, generator down is it?.
0 Replies
1
Reply Mon 23 Sep, 2013 05:06 am
@tsarstepan,
I looked up 'Under the Dome' on Wiki and see that there's probably going to be a second 13-episode series, which indicates the first series won't neatly wrap it up and will leave many loose ends.
Personally I'm waiting to see if the dome is the creation of aliens or a failed government experiment gone wrong, but like i said, the show is like a soap and bores me, so what i'll do is skip most of the episodes and only watch the final one (ep 13) of series 1 to try to get some answers..