Forums: Humor
Email this Topic • Print this Page
1
Reply Fri 3 Mar, 2006 04:52 pm
I was really hoping we would be getting some more applicants for the position of Co-Anchor. I guess I may have to see if I can sweeten the benefits package somewhat.

And I hope he is enjoying it. I didn't mean someone with views so opposed to mine that we'd have a Duke It Out on TV! 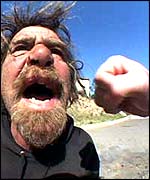