Feel Good Story of the Day...

The men had been missing in the Micronesia archipelago for nearly three days when their
distress signal was spotted Sunday on uninhabited Pikelot Island by searchers on Australian
and U.S. aircraft, the Australian defense department said Monday.

The men had apparently set out from Pulawat atoll in a 7-meter (23-foot) boat on July 30
and had intended to travel about 43 kilometers (27 miles) to Pulap atoll when they sailed
off course and ran out of fuel, the department said... 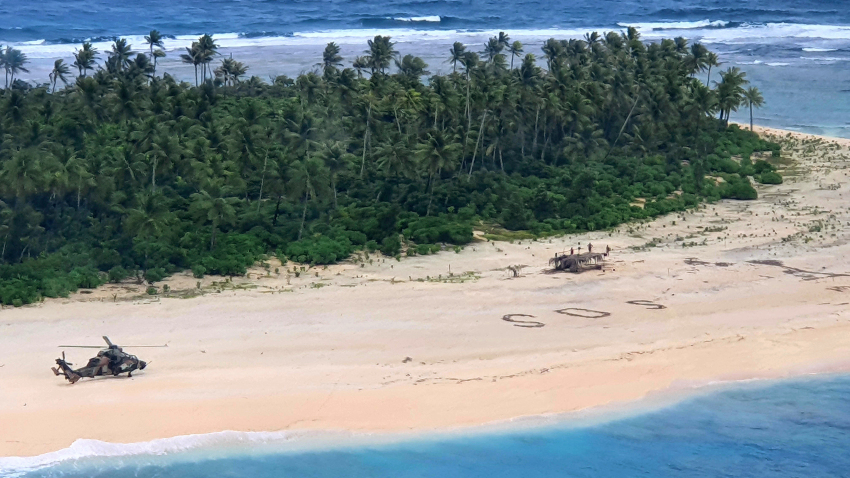 Type: Discussion • Score: 5 • Views: 1,147 • Replies: 3
No top replies
2
Reply Tue 4 Aug, 2020 06:20 am
Bernadoodle Nora has a very important job at the Marion, OH Municipal Courthouse. Her job is to help people feel comfortable in court so they can get what they need done without added anxiety.

Nora is currently undergoing training in everything from basic obedience to full therapy. If you hear a squeak in the court, she's playing with her pink monkey toy.

I've always thought it would be a good idea for our spy satellites to take an occasional glance at all the deserted islands of the world just to see if anyone is stranded there.

Presumably the satellites won't be busy looking at anything else when they are traveling over the middle of an ocean. But even if I'm wrong about that and we do have them looking at stuff in oceans, I'm sure we could afford to squeeze in a few glances at deserted islands now and then.
0 Replies
-3
Reply Sat 8 Aug, 2020 10:40 am
@Region Philbis,
My 'personal' fgs-of the day.

Brian (Ex-colleague), a small fella '4ft-ish' (Had to leave work because of a suspicious lump (Turned out - 2lb tumour) On his lower back) - He lived for pole-fishing (Catch & release) - Loathed hurting fish - So used 'playbait' (No hook, No harm).

His mum & dad (Both wheelchair-bound) Had arranged for him to visit 'Seaworld', in Florida (I think, Not sure.) He is from Wales and had never even been to England (75miles away) Let alone - Accross the 'pond' (Atlantic).

So - Off he headed (Unaware of his impending cancerous demise) to Heathrow airport - With his (Purchased) Thai-bride to-be 'Wengin ouflah' (Forgive spelling - Using phonetics).

Upon arriving in Florida he had a 'turn for the worse' His wife abandoned him in the everglades (A swampy place with alligators (Shortarse american - Would-be crocodiles) for a mexican businessfella... Not sure why...

Brian, although abandoned, dying, shorter than most labradors and alone in a strange and unfamiliar land - Plodded on with his holiday.

He made it to 'Seaworld' - Saw the imprisoned attractions - And disliked said event.

He detoured from his 'Holiday-construct' - Hired an RV (Big mobile Campervan-thingy) And headed out toward Texas (West-ish from Swampida) - This is when his heroic endeavours came to pass.

Apparently, He hit New Orleans during Hurricane Katrina - His RV broke down and was swept into the Mississippi delta-region - He was rescued 32 km out into the gulf, 12 days later - Clinging to an inflatable 'sex toy thingy'.

Not His - Just something he happened by that floated.

Along with 24 puerto rican chidren - He had managed to recover - Place in a dinghy, and supply them with fish meals he'd caught by acting as livebait for nearby (Barracudas (I think)) and catching them in his mouth.

He'd lost both his legs (I believe from the RV plunge - Unsure), Anyway He's dead Now - But 24 kiddies are Alive & well due to his, brave resolve.

Have a lovely day
0 Replies