Does Anyone Care if Tom Cruise is Gay?

Forums: Movies, Gay Celebrities
Email this Topic • Print this Page
Reply Thu 2 Jun, 2005 10:10 am
I've long assumed that Tom Cruise is gay, in the same way I long assumed Rosie O'Donnell was. (From before she came out, I mean.)

Lots of reasons, including the fact that gay friends in L.A. were like duh. Of course. Open secret.

IF he is, do you think he really needs to take the extraordinary, old Hollywood measures to hide it that he's taking? The marriage (not sure what's up with Kidman), the high-profile liaisons? I mean, could the Katie Holmes thing be any more fake? 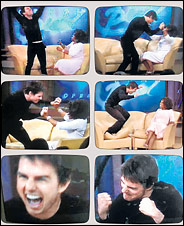 If he is straight then he is ridiculously indecisive and should be banned from going out with anyone let alone marry them as he seems to think relationships are 'throwaway'.
This Katie Holmes thing is totally OTT, I think a declaration of love that is forced for TV is awful and can damage the real relationship.

Nobody would care if he was gay.He is a box office smash actor, loved by millions.
0 Replies
1
Reply Thu 2 Jun, 2005 10:17 am
I don't think it matters. Maybe he's afraid he'll lose the "leading man" roles, but I just don't see it. Personally, I'm not a big fan of his acting anyway. I might like it better if he played a gay role. I saw Tom Selleck play a gay role and I think it was his best. And I don't think he's gay.
0 Replies
1
Reply Thu 2 Jun, 2005 10:18 am
Well, if his career was ruined because he was gay, it'd certainly be a black market on Hollywood, as is the fact that his career continues in spite of the fact that he sucks.
0 Replies
1
Reply Thu 2 Jun, 2005 10:23 am
Yeah, I had as a poll option "He takes on his meatiest role ever as the first gay hero of a mainstream movie and his career is rejeuvenated..." Although you're right, "In and Out" was mainstream. Comedy tho. (Agreed about Tom Selleck.)

I think I remember liking him in "Risky Business", when I was more susceptible to toothy grins. Haven't liked him in anything since.
0 Replies
1
Reply Thu 2 Jun, 2005 10:49 am
Answer to your headline question - NO
Why should anybody care?
0 Replies
1
Reply Thu 2 Jun, 2005 10:57 am
I personally don't care about his sexual preference - it wouldn't change his sex appeal a bit. I've always wondered why it matters to fans whether some sexy person is gay or straight. It's not like you're ever going to meet him or her and find out for yourself, anyway.

I still think he's sexy. He's not a great actor, god knows. He was interesting in Magnolia though.

I do think that coming out would affect his career adversely.
0 Replies
1
Reply Thu 2 Jun, 2005 11:04 am
I think it is sad ( if he IS gay ) that he HAS to hide it.
What or who he does in his bedroom doesnt effect his job as a performer. He isnt paid to be heterosexual, homosexual or sexual AT ALL.. he is paid to be an actor.

"You're dangerous" (standing face to face)

"You can be my wingman" (Cruise is fighting an erection)

"No, you can be MY wingman" (Cruise is no longer fighting the erection)

And the volleyball scene. You can see Cruise checking out the man asses.
0 Replies
1
Reply Thu 2 Jun, 2005 01:41 pm
Check it out...this is actually a drawing that Tom Cruise made, fantasizing what that scene in Top Gun actually should end up like:

0 Replies
1
Reply Thu 2 Jun, 2005 01:46 pm
Those who make it a big deal just doesn't understand what humanity is all about.
0 Replies
1
Reply Thu 2 Jun, 2005 01:57 pm
Get real people. You'd better believe millions of people would care. He's got a huge fan base. Who knows how many Tom Cruise fan clubs there may be all over the world. I think they would care a great deal. Not saying it's right or wrong, just that many would care.

Of course, if he came out, he'd have a whole new fan base. I'd like to witness that in my lifetime, a major movie or recording star coming out of the closet. My argument has always been that their fan base would merely shift and they wouldn't lose anything. It remains to be seen but I sure would like to see that theory put to the test once and for all.
0 Replies
1
Reply Thu 2 Jun, 2005 02:01 pm
Since I am just a run of the mill breeder and wouldn't f**k him either way, I could care less.

Squinney on the other hand would be heartbroken.
0 Replies
1
Reply Thu 2 Jun, 2005 02:02 pm
Soz, I don't care one whit if he's gay or not. I never thought he could act his way out of the proverbial paper bag until I saw him in Collateral. 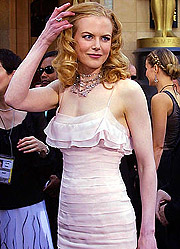 Or is just me?
0 Replies