Peter Fonda, the tall, lanky actor who became a star and a counterculture sex symbol in the film
“Easy Rider,” carrying on the Hollywood dynasty begun by his father, Henry Fonda, died Friday
in Los Angeles. He was 79.

The death was confirmed by his family, who said the cause was respiratory failure because of lung cancer.

During his acting and filmmaking career, Mr. Fonda earned two Oscar nominations, almost three decades
apart. He shared, along with Dennis Hopper and Terry Southern, a best original screenplay nomination
for “Easy Rider,” the story of two hippie bikers on a cross-country trip fueled by drugs and the thrill of
youthful freedom.

Easy Rider was such a seminal film that I'm not sure whether or not it needed a great screenplay. I do know that it made a huge impression on me as a 15-year-old budding hippie, but really all that I remember from it was Jack Nicholson's performance and the final scene where the redneck with the goiter shoots Dennis Hopper.

He really was not as good an actor as his father or sister.

Regardless of any artistic talent he may or may not have had, he proved to be either mentally ill, an out of control alcoholic, or a despicable human being (probably all three) when he tweeted: 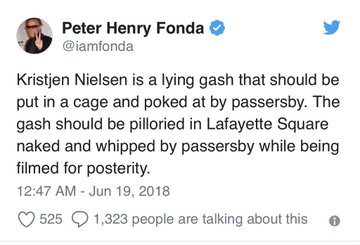 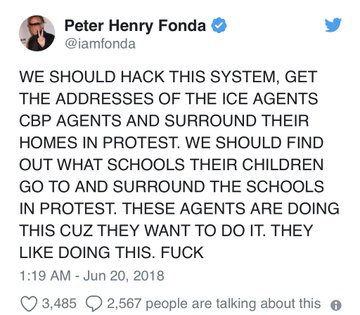 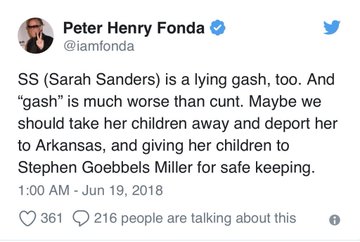 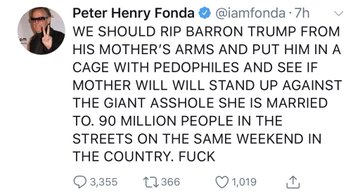 Can't wait to see a Fonda fan defend them.

Still, he was a fellow human so I do hope he is resting in peace. God forgives.


0 Replies
1
Reply Sat 17 Aug, 2019 11:45 pm
May his soul find a peaceful resolution to the questions which may have filled his time on Earth.
May his surviving loved ones find comfort having had the opportunity to know him.


Looking through his resume of films and television shows he appeared in, I am mildly surprised that possibly the only thing I saw him in would be 2 episodes of the program, In The Heat of the Night.
(only seen clips of Easy Rider)

0 Replies
1
Reply Sun 18 Aug, 2019 02:20 am
In a bizarre bit of casting, Henry trotted out that iconic midwestern accent in arguably the lead male role in War and Peace. I liked the movie, but that made it seem so ridiculous.

I adored him in 12 Angry Men, Grapes of Wrath, Mr. Roberts, a couple of Westerns.

Never liked Peter. Jane in Barefoot in the Park. Jane’s presence always got in the way of whatever role she was in, for me. I never believed her, so to speak.
0 Replies
2
Reply Sun 18 Aug, 2019 05:59 am
Henry had some roles that didn't fit, that I hated, but he had so many great roles that he was my overall favorite actor.
0 Replies