Why did Disney buy Fox? What was the purpose of that?

Forums: News, Commerce, Current Events, Business, Corporations
Email this Topic • Print this Page
Reply Sun 11 Aug, 2019 07:46 pm
Hi. I am just a little curious. Why did Disney buy Fox? What was the purpose of that? 21st Century Fox is a major Hollywood studio- did the company fall on hard times, and needed a company like Disney to back them financially?

Did Disney buy Fox partly to acquire the rights to the Marvel movie properties Fox owns?

According to what I read, Comcast wanted to buy Fox too.

I think Disney owns ENOUGH stuff. The idea of buying Marvel Comics and an entertainment property like Star Wars took some getting used to at first. It wasn't really surprising that Disney bought Marvel- that seemed inevitable, considering Warner Bros. owns DC Comics.

What does Disney's acquisition of Fox mean for the future of Fox's animation properties? This seems a little weird and unsettling to me knowing the House of Mouse now owns Family Guy AND The Simpsons.

At least Disney doesn't own Terrytoons.

Clearly to rake in more revenue.

At least Disney doesn't own Terrytoons.

At any rate, 20th Century Fox did briefly own distribution rights on Terrytoons. Later on, that was sold off to CBS, although for a while, distribution of cartoons to the theaters was still being done by Fox.

As for the future of animation projects, there's not a need for concern. The merged companies have numerous divisions. Even Disney has a division geared towards more adult entertainment (as opposed to the division which only creates for children).


Looking forward, Disney could decide to sell off For at some future date.
2 Replies
0
Reply Sun 11 Aug, 2019 11:25 pm
@Sturgis,
But was Fox falling on hard times? Often, one company buys another if the latter company was having some kind of financial trouble.

"One thing they will not get is the Terrytoons (Mighty Mouse, Heckle & Jeckle, Deputy Dawg, etc.). Twentieth Century Fox distributed those theatrical shorts (and later TV series), but Terrytoons was an independent studio. Owner Paul Terry sold the library to CBS in 1955 (CBS/Viacom/Paramount still own those rights today)."
3 Replies
0
Reply Sun 11 Aug, 2019 11:43 pm
@Sturgis,
Do you remember years ago when Disney had the Disney-MGM Studios (Theme) Park? Was that some part of some kind of special entertainment merger, or was that just some special licensing deal Disney struck up with MGM?
1 Reply
1
Reply Sun 11 Aug, 2019 11:50 pm
@JGoldman10,
The MGM-Disney was a licensing agreement which eventually ceased and it went to being only with the Disney name.
0 Replies
1
Reply Sun 11 Aug, 2019 11:53 pm
@JGoldman10,
I don't know anything about what was going on with Fox's financial matters. Sometimes it's just a businesses deal that benefits both sides.

But was Fox falling on hard times? Often, one company buys another if the latter company was having some kind of financial trouble.

No. That's not why companies buy other companies.

They buy low and sell high if they can. None of this is out of the goodness of anyone's heart whatsoever.

Corporations are in the business of making money. Period. If their work is accidentally altruistic, or it destroys the world, both of these consequences are secondary to the chief purpose of the business.

Businesses are organizations of people which, by definition, are designed to make money. Even nonprofits, by the way. The main differences with nonprofits is they tend to plow their assets into other places. And those other places can be rather altruistic (schools for the blind, funds to cure terminal illnesses, etc.). But the people who work for nonprofit organizations are paid salaries just like employees in for-profit businesses, because their landlords and the electric company won't take good feelings and altruism in payment for bills.

And one more thing. Businesses scoop up undervalued businesses which they think have potential. Disney's management undoubtedly saw the purchase of Marvel's assets as a good investment. The Board of Directors agreed and, if the shareholders voted on it, they agreed, too. Given Marvel's popularity, it was a savvy decision.

And when Marvel stops making money for them, Disney will spin it off and sell it.

You knew that was going to happen eventually. Disney expressed an interest in acquiring Henson's company and the Muppets since 1989:

I remember watching The Muppets at Walt Disney World in 1990: 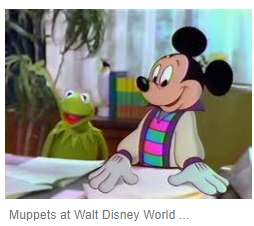 This image still pops in my head.
0 Replies