Forums: Discussion
Email this Topic • Print this Page
0
Reply Sun 3 Mar, 2019 12:47 pm
@jespah,
My question was specifically about learning to write. And I wrote "...'could possibly' cause that child to see himself as a failure..." In my answer to my question ( which no one answered at the time) , (in words that Izzy calls a
"rant" ) (haha), I said that I see it time after time, year after year. That is merely stating the fact that many teachers don't know the first thing about teaching a child how to write. That is a fact. .
1 Reply
4
Reply Sun 3 Mar, 2019 01:03 pm
@Ponderer,
It was never my job to teach handwriting. That was covered at primary school and it's not even assessed.

Now if you're saying that handwriting is such a problem that it's holding kids back, who do you think would know? Who would be on the sharp edge of that?

I'm saying examiners, people who mark public exams, they'd know if they had to refer a significant number of papers back to head office because they were illegible.

I've marked public exams for over ten years. I'm not allowed to go into specifics because I signed a confidentiality contract.

Although there are procedures for referring illegible scripts I've never once had to pass a script on. I've seen some pretty shitty handwriting but nothing so bad I can't mark it. And I've given top marks to some really shitty stuff and low marks for stuff written in beautiful copperplate because handwriting isn't assessed.

I said that I see it time after time, year after year. That is merely stating the fact that many teachers don't know the first thing about teaching a child how to write. That is a fact. .

Well prove it. You're the expert so tell everyone how you would go about teaching a class of 30 kids how to write. Where's that lesson plan?

As you're such an expert I expect it will become a very useful resource for the teaching of writing throughout the World. It can be your great gift to humanity.

Very good at pointing out what's wrong, no idea whatsoever about how to put things right.

1 Reply
-1
Reply Sun 3 Mar, 2019 03:13 pm
@izzythepush,
Here's your option. Talk to yourself or someone else. I will neither read what you write nor write to you again. I hope you understand that.
1 Reply
3
Reply Sun 3 Mar, 2019 03:14 pm
@Ponderer,
Of course I do, you don't like being shown up. I bet you don't stop at education to have a strong opinion but no idea whatsoever, I bet it's something you carry over to all walks of life/ professions.

If nothing else you'll have put the OP off from ever asking a do my homework question on able2know again.

Your "help" consisted of telling him his assignment was crap and he probably didn't know how to hold a pen properly.

What's that going to do for his confidence?
0 Replies
3
Reply Mon 4 Mar, 2019 11:04 am
Why is ponderer obsessing about holding a pencil when obviously the OP is able to type the instuctors ‘lesson plan’........doesn’t appear to me the OP is a very young child.....whoever posted this assignment is just a lazy, entitled work adverse ninny who thinks hard work is for saps.

Unfortunately, students allowed to get away with passing their work off on others are ill prepared to enter the adult workforce. One of my first supervisory assignments required me to guide freashly minted linguists into learning how to recognize info of value and then writing reports. I had a young man how stopped me one day to ask me if I knew what “pick a non-English” word meant....so I said “how is it used”?....I didn’t recognize the phrase so then I asked “what’s the dictionary definition”? He chirped “oh good idea”, reached for the dictionary and started to hand it to me.......I chuckled, and said. “Dont hand it to me, you’re the one who wants to know what it means”. He looked a little surprised, but after that he began to check that dictionary and develop other skills to make himself more resourceful. I suppose I could have dropped everything and looked up the word for him, but he learned that he could figure out things for himself.........
and hey, a 25 year old adult should be able to use a dictionary all by themselves.
2 Replies
2
Reply Mon 4 Mar, 2019 11:31 am
@glitterbag,
You make a very good point, the advances in IT are making good penmanship all but obsolete. Once exams are out of the way very few of us will need to write a handwritten letter, unless we want to.

You make a very good point, the advances in IT are making good penmanship all but obsolete. Once exams are out of the way very few of us will need to write a handwritten letter, unless we want to.

Most handwriting is relegated to shopping lists and scrambled missives on greetings cards. 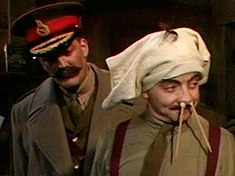 More like copy and pasted the text from a webpage than type the whole thing out.


I suspect that (I highlighted in red) is the text to a text link. So the OP is even far more lazier....

Just stick a couple up your nose.

that's one of my favorite Black Adder episodes.

1 Reply
1
Reply Tue 5 Mar, 2019 06:35 am
@glitterbag,
When the 4th series first aired it attracted a lot of criticism. WW1 is linked to Remembrance Sunday and the writers were accused of disrespecting the sacrifice of all the men who died in an utterly pointless war.

This all changed with the last episode, it has a great deal of pathos and the sense of loss is very real.
1 Reply
1
Reply Tue 5 Mar, 2019 07:25 pm
@izzythepush,
I remember the last episode vividly. I got a lump in my throat as they scrambled out of the trenches.....very well done.
0 Replies