Who was the Captain of the wooden sailing ship "Confection"?

If bobp really is looking for an answer he/she needs to provide more information such as date, flag she sailed under possibly port she sailed from.
0 Replies
1
Reply Sat 16 Apr, 2005 05:08 pm
I inherited a wooden model of this sailing ship and know nothing about it. 3 masted sailing ship of @ 1700's. Model has 10 guns so it may be a pirate ship. No flag on it. Plaque on it says ships name: "Confection". Curious to find any info on it and its history after failing to find anything during an internet search. This may be a serious challenge. Anyone willing to take it on?
1 Reply
2
Reply Sat 16 Apr, 2005 07:44 pm
All I could find on this ship is that it is a wooden model, but you already know that. It is possible that it is not based on a historical ship.

You indicate that it has 10 cannons... A class 6 ship would have had at least 32 cannons.

Model has 10 guns so it may be a pirate ship.

More likely she was an armed merchantman. The guns are to discourage pirates,
0 Replies
1
Reply Tue 19 Apr, 2005 06:16 am
Does the plaque actually say that "Confection" is the ship's name? Or does it just give that word? If so, it could possibly mean that the model is a "confection" - i.e. that it is a "made-up" vessel, perhaps using characteristic features of two or more real ships.
0 Replies
1
Reply Tue 19 Apr, 2005 12:19 pm
It just says "Confection".
I hadn't considered this possibility.
0 Replies
1
Reply Fri 28 Dec, 2012 02:16 pm
For Christmas I received a model of the 3-masted sailing ship 'Confection'. I have tried searching the internet, but no information.
I have just finished reading a book about a guy who put hundreds of thousands of $$ - millions eventually - into trying to find a pirate ship that was laden with gold and silver and artifacts - although the guy was as much into archeology as treasure hunting.
The captain of the pirate ship was named 'Black' Sam Bellamy. I am sure that when the treasure hunter/historian was looking for Sam's ship he came across, by accident, the sunken remains of the 'Confection'.
I am frantically searching my library for the name of the author and Bellamy's ship he spent many years trying to find, eventually opening a Pirate Museum from the artefacts that he found on his many dives.
When I find the book, I will post the name of the author and the ship he was looking for for all those years, and the reference to the 'Confection'.
1 Reply
1
Reply Fri 28 Dec, 2012 02:32 pm
The ship that the guy was looking for was Black Sam's pirate ship, Whydah, and the book was by Barry Clifford, the diver/investor/treasure hunter/historian.
I hope that this information gives those that are interested a lead.

Even if the book doesn't tell you much about the 'Confection', it's fascinating reading, which I highly recommend.
Bunts
.

I have also searched the internet and found no reference to this ship at all
1 Reply
1
Reply Mon 2 Mar, 2015 01:30 am
@Stuart Ward,
I could only come up with this sailing related page which contained the word 'confection'.
Not much use to anyone, but may hold farmerman's interest for a minute or so.

http://www.sailpolaris.com/SouthCoastEngland.htm
0 Replies
1
Reply Mon 2 Mar, 2015 02:09 am
I suspect that the searches were uninspired. This is from Amazon UK, and is alleged to be a model of the ship Confection. 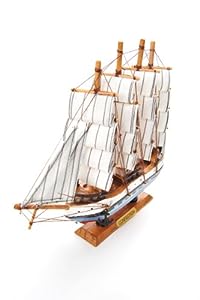 It's not much of a model, rather crappy, in fact--but it would appear to have been a clipper ship. I'll see what else i can come up with.
0 Replies
1
Reply Mon 2 Mar, 2015 03:17 am
Well, i can't find anything else (at least not yet, and i don't think i'll spend any more time on it). I have, however, come across some interesting videos of sailing vessels in the modern world. I'm embarked on a roughly four hour journey with an eighty-year-old German fishing smack, sailing from Greenland to Newfoundland, then Ireland, Scotland and the north German coast. I'll take it a little bit at a time.
0 Replies
1
Reply Mon 2 Mar, 2015 04:17 am
Maybe bobp was referring to the Good Ship Lollipop?
0 Replies
1
Reply Wed 8 Mar, 2017 02:48 pm
@Bunts,
Hi my na is Renee did you ever find that book about the Confection
0 Replies