My friend C. and I are ususally on the same page with our tastes as far as the home, but here we have diverged.

I'm giving a lot of info, but that's so you can see it. Think boomerangs thread about the corner refrigerator.

In the Mexico house, my front door is all clear glass. The main living room window, that faces out into a garden, is obviously glass.
The front of the house cannot be seen from the street. There is a locked solid wood door and wall for privacy, which is very common there.

Inside the property, there are 3 units, what we would call townhouses. I'm in the one closest to the gate. The only people who ever walk by are my 2 neighbors, husband and wife, and the owner of the middle unit that only uses his house for vacations and weekends. In other words, very private.

Rather than drapes, blinds or other window treatments, I had opted for the front door what you see below, but with slightly smaller fans. It's on the inside of the door. A similar iron work is on the living room window, but can open like french doors. Even though wrought iron work is much less expensive there, it was still one of the big investments in the house, and is what makes the first floor living areas special and notable. What I have discovered, is even with the smaller fan pattern, it Almost gives enough privacy, but barely not. Even though no one looks over from the walkway, it feels slightly exposed, more so at night.

I opted not to get blinds for the downstairs as it felt too ordinary. I also didn't want drapes of any kind as it just felt like too much "stuff"

I don't want/need the entire window or door covered. Only an approximately 2 foot in height area in the middle which would prevent the average size adult human from seeing in, and to have their view obscured as they walk by the door and the window.. Like from 4'6" to 6'6"

That way, my view of the garden would not be obscured. It's the main object of beauty as far as views.

Last night I ordered some samples from an online store. Below are a few examples.... 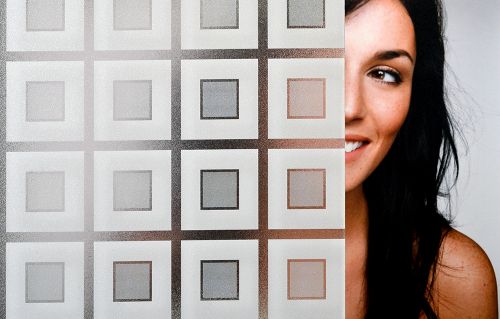 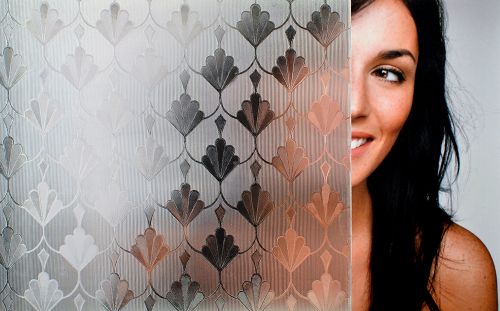 They had other images online that should the coverage of something a few feet away, and I picked those where you could see outlines, but not details.

C. is not a big fan of window film, but will only go so far as to comment "It just looks like window film"
He suggested some shears, but my comeback was that then I'd have the iron, plus hardware, plus more things that have to be opened and closed.
The house is more or less mid century modern, leaning towards minimilism, and I'm going for the Less is More.

I'm going down there over Christmas, and will be bringing the samples with me.

Last night I explored other privacy options, and saw where some people just adhere cloth with starch to the glass. It looks interesting. Something like burlap would look different. Maybe horrible, I don't know.

I suggested to C. I could get a pieces of glass that opaque/semi opaque and have that adhered to the glass in the area where I'm thinking of the film. All this was done over texts. No response to that.

Does that sound awful?

There are Bougainvillea planted there in front of the window, but they aren't growing fast. Eventually they can be trained into a bush that can obscure. Can't think about that yet. 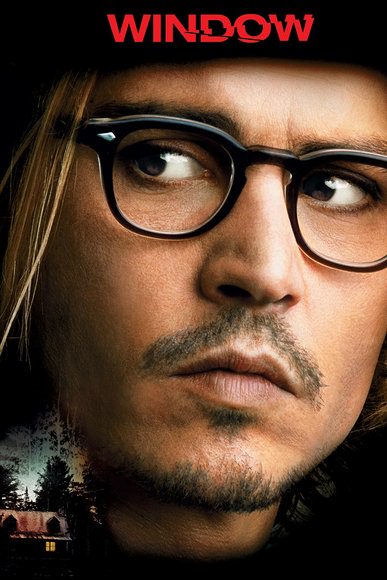 To begin, I am against the lace. It may look nice for a time; but, any small tear or bubble and it's over and done, leading to replacement. Lace additionally is (from my experience) a dirt sucker. Sucks in every danged particle of dust or dirt in the air. You wanna keep removing and washing and replacing?

Two options with the opaque or a frosted glass. Obviously have it cut to size and either adhere to the glass currently in place or if there is enough space between the window and your current fan design coverage, tilt it inward at a 55°-70° angle. This is something which I have done numerous times and it not only prevents prying eyes, it can be easily removed if you so choose when guests drool in, it can also stay in place if you open a window and will prevent rain splatter from entering.


Not too keen on film. To me, it looks plasticky.

Not too keen on film. To me, it looks plasticky.


All the above examples in the OP look like films designed for one purpose: in lieu of a shower curtain. Something to add to the shower's glass doors. Plasticky makes sense in that context.

Chai? Do you have any examples used on windows (outside the bathroom context)?
0 Replies
1
Reply Thu 13 Dec, 2018 05:13 pm
Excellent comments sturgis and tsar.

Tsar, I guess you're right, now that I'm looking with your eye. Too bathroomy. All of them look more or less like that though. Sigh. So back to the drawing board.
I'll still take the samples with me of course, just to see. But you've made a good point.

Sturgis, good point about lace being a dust sucker. This place is in the high desert, so yeah, for much of the year, dust accumulates quickly.

I'm not understanding the purpose of putting it at an angle. What does that accomplish?

Yeah, a piece of frosted glass with our without a design should be easy enough to come by down there.
There are plenty of craftsmen, and Omar, the maintenance guy from the property management place could adhere it. He's got to come over to put up some coat/key hooks by the front door, and also put on some knobs on this chest of drawers and coffee table I had made.

Having furniture made by a carpenter to your own specs is cheaper than buying it in the US. Interestingly, plumbing fixture are more expensive. I hated the kitchen faucet that came with the house, and they wanted the equiv of about $75 more for one I bought in the States at Lowe's.

I better like the idea of adhering a piece of frosted glass to the clear glass, if it can be later removed when my needs change, like the plants grow tall enough.

Or, Omar can mask off a section of glass and use etching cream to change just that area, if I decide I'd like to make it permanent.

1 Reply
2
Reply Thu 13 Dec, 2018 05:21 pm
@chai2,
The reason I mentioned placing the glass at angle, was, to allow air in without people looking in and it keeps rain water from splattering into the home. Since there is not enough space, definitely just affix to the actual window glass.


No other ideas from me right now.

1 Reply
1
Reply Thu 13 Dec, 2018 05:45 pm
@Sturgis,
Ah. Well, regarding air, the patio door on the opposite side of the room is almost always open (it's enclosed with a wall as well), and there are other windows to create a cross breeze. Actually, when I'm there I generally leave the door to the roof open all the time, since as the day warms up the heat rises out.
The temperature during the day is pretty much in the 60's and 70's most of the year.

As far as rain, there's a balcony that sticks out above the front window, and water spouts, so it would be rare for rain to get in. Plus, there'a definate rainy season, other than that, dry. Good observation though.

Let me check out more about adhering frosted glass to clear glass.....

I only did it on one side, and a small patch in the middle was slightly different, but I think that's because I didn't put on a thick enough coat in that area.

Will try on another side later.

I held the canister up to roland, standing a few feet away, and nope, couldn't make him out.

If that's all there is to etching glass, I shoulda been making stuff and selling a long time ago.

I have next to my entrance door a long small window and I bought one of these inexpensive paper shades with a peel & stick surface and they're perfect and cheap.