Without realizing it, we’ve become a nation of monopolies. A large and growing part of our economy is “owned” by a handful of companies that face little competition.

They have no incentive to deliver better products or to get more efficient. They simply rake in cash from people who have no choice but to hand it over.

This would be impossible if we had true capitalism.

All right! So you are a convert to capitalism!

Marx plays no role in that though.

His birthplace - the "Karl-Marx-Haus" in Brückenstraße - can still be visited today and provides information about his life and work.
Karl Marx is also present in the Trier cityscape as a sculpture by the Chinese sculptor Wu Weishan.
Two years ago there was a large regional exhibition in the city museum and in the state museum on the life and work of Karl Marx, embedded in the living and working world of his time and freed from ideological ballast. 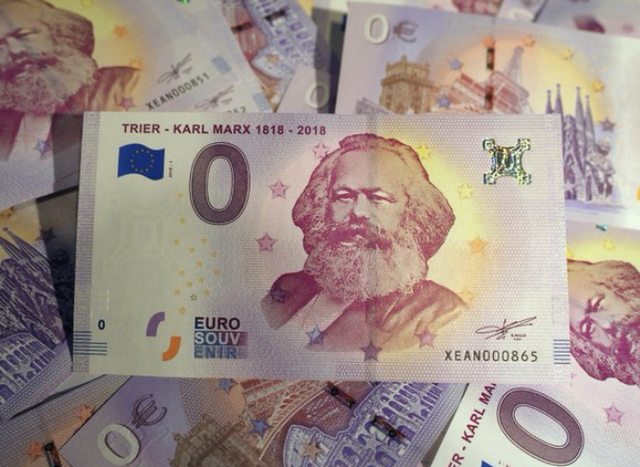 Do you mean to say that capitalism is different from organized crime?

If anyone ever had any doubts (I know I didn't, but....) about whether you are a hard-core commie cheese-eater, now they know. That one sentence says it all.
0 Replies
0
Reply Fri 3 Apr, 2020 11:46 am
@layman,
A Little message from youtube:

video unavailable
This video is no longer available because the YouTube account associated with this video has been terminated.

For those who missed it, the FBI now has the goods on the Clinton Foundation. Indictments coming.
1 Reply
0
Reply Fri 3 Apr, 2020 11:58 am
@layman,
Youtube would NEVER terminate CNN's account, so here's a little substitute. This is from 2 years ago. After two years, the investigation is complete, it seems.

Time's up, Hilly and Billy.

New tax records show the Clinton Foundation accrued a near-$17 million loss in 2018, marking two years in a row that the foundation has lost money. The records highlight a $16.8 million loss by the foundation last year. The Clintons' nonprofit organization brought in only $30.7 million while spending $47.5 million.

How does a "charitable" foundation lose money? Let's see here....

The $47.5 million spent this year went toward grants, payroll,. and promotions.

A LOT of expenses there, eh? Chelsea needs charity too, I guess.

Now, fresh financial documents show that contributions and grants to the Clinton Foundation plunged since Hillary lost her election bid. They dropped from $216 million in 2016 to just $26.5 million in 2017 — a stunning 88% fall. Throughout Clinton's tenure as Secretary of State, the foundation pulled in an average of $254 million a year.

They wouldn't be "in the red" if they still had a quarter of a billion coming in every year. I wonder why their income dropped so dramatically after November 2016, eh? I bet russian propaganda caused the decline, ya know?

@SECNAV
: you fit right in with the worst administration in US history. Petty. Corrupt. Sycophantic. Good luck recruiting best and brightest for our great Navy.

2 Replies
0
Reply Fri 3 Apr, 2020 03:28 pm
@blatham,
Does it strike you as odd that no other Captains of deployed ships had previously done something similar?

The crew of a Nimitz-class carrier is about 5,600, the median age about 20, and crewmembers with diabetes or heart disease are all screened out before assignment. In short he crew involves only the least vulnerable people in the country. A deployed carrier generally has about 11 doctors assigned and a large onboard medical facility or sick bay as it's called. CVN 71 was already in Port in the Guam Naval facility, and already had onshore facilities assigned able to accommodate up to 1,000 from his crew for quarantining or merely to reduce the onboard density. I read the letter soon after it hit the news and the reported fact that he had e mailed it without security classification to 20+ people, and immediately concluded that he would be quickly relieved for cause and his failure to accept his responsibilities for his ship and crew. Instead of reporting the facts of the situation; his plan of action for dealing with it; and making specific requests for assistance, he wrote an emotional, largely rhetorical screed in effect blaming the Navy for his situation. Worse, in the unclassified mode of its transmission he invited the release to the press that occurred within hours after the e mail's transmission.

And it's been capitalists that have tried to rape and pillage Venezuala's natural resources for decades, not to mention the US trying to do it's own regime change their last year....after driving the country into despair with sanctions.


A rather high concentration of stupid misstatements and rhetorical overreach here.

Well over a million Venezuelans had fled the country to Colombia, Peru and the U.S. long before any sanctions had been applied, The impoverished and undernourished people of Venezuela very likely long for the return of the "rape and pillage" opf those people who made Venezuela the then richest country in South America
0 Replies
-1
Reply Fri 3 Apr, 2020 03:52 pm
@blatham,
blatham wrote:

Apparently not everyone agrees with you, george. See post above yours.


Who is Paul Eaton and what does he know about ships generally or aircraft carriers in particular or the responsibilities of a ship's captain?
2 Replies
-3
Reply Fri 3 Apr, 2020 04:47 pm
Quote:

Half of people with coronavirus have no symptoms, data shows

About half of people who have the coronavirus show no symptoms, according to data from Iceland, the Italian town of Vo, and the Diamond Princess cruise ship.

The data from those places is of particular interest to researchers because in those places even people without symptoms were tested – which is not the case in the U.S. and most countries, where desperately needed tests are reserved mostly for people who show symptoms.

All 3,711 passengers on the Diamond Princess cruise ship were tested, 712 tested positive, and of those, 331 (46 percent) have never shown outward symptoms, according to Japan’s health agency, which has also been cited by the CDC.

On the cruise ship, nine people have died, with 10 still in critical condition. After adjusting for expected further deaths and for age – all passengers who died were over 70, and the average age on the ship was 58 – London researchers used the ship’s data to estimate that the death rate for a general population is around 0.6 percent.

This virus aint so tough, eh? It doesn't even affect half the 60 year old people it attacks. Not even a cough. Sheeeeeit.

The new coronavirus causing COVID-19 has led to more than 454,000 illnesses and more than 20,550 deaths worldwide. For comparison, in the U.S. alone, the flu (also called influenza) has caused an estimated 38 million illnesses, 390,000 hospitalizations and 23,000 deaths this season, according to the Centers for Disease Control and Prevention (CDC).

No one dies of old age. Usually when a person is said to have died "of old age," it means that he or she succumbed to one of the diseases common in our later years

As people get older, their cells simply don't work as well, and can't stave off disease as easily or heal as well as they once could. As a result, older people may die from injuries or diseases that a younger person would easily survive. But nothing dies from simply being old.

Who is Paul Eaton

All 3,711 passengers on the Diamond Princess cruise ship were tested, 712 tested positive, and of those, 331 (46 percent) have never shown outward symptoms, according to Japan’s health agency, which has also been cited by the CDC.

This thing don't seem to be as "highly contageous" as it's made out to be. It can't even latch onto 4 out 5 pervs that it comes across.
0 Replies