What will be the legacy of America?

But we have wealthy and influential people who have humble beginnings as well.

So do we, it's not something unique to America.

I think you'll find that most stuff going back to the dark ages over here was swiped by the Normans when they invaded.
1 Reply
1
Reply Sat 1 Sep, 2018 10:55 am
@izzythepush,
Quote Izzy:

So do we, it's not something unique to America.


So what you are saying is that the aristocracy over there has gotten less powerful over time, since a few hundred years ago almost everyone with power and money was an aristocrat, and now a much smaller percentage have gotten their power and money through inheritance.

That's a far cry from saying America has an aristocracy, people who inherited not just money but a legal office bequeathed to them at the moment of birth.
1 Reply
1
Reply Sat 1 Sep, 2018 11:58 am
@Blickers,
Quote:

But we have wealthy and influential people who have humble beginnings as well.

Your country suits the super rich far more than ours. If you want to pretend you're in some workers paradise then go ahead. At least we can spot our aristocrats, you keep pretending yours don't exist.

Sanders has repeatedly spoken out against Amazon, and last week, he sent out an email to his supporters asking them to join forces against Amazon, which he accused of paying its workers poor wages while its CEO and founder amasses unprecedented wealth. The email accused Amazon of engaging in “greed which seems to have no end” and encouraged readers to sign a petition that would impel Bezos to improve work conditions and increase wages.

The petition has received 120,000 signatures and garnered plenty of support across social media. Sanders also requested to hear from Amazon workers who have “used public assistance, such as food stamps, Medicaid or subsidized housing, in order to make ends meet.”

In a rare move from a company that seldom responds to complaints, Amazon fired back Wednesday, calling Sanders’s allegations “inaccurate and misleading.” Amazon accused Sanders of purposely seeking out negative stories, and insisted that it’s doing plenty for its workers.

Advertiser Content FromBrown - Forman
Its response is a signal that while Amazon would probably prefer to remain silent when it comes to worker treatment and income inequality, those conversations have become more and more difficult to ignore — in part due to Sanders and the rising socialist wave he represents.

While Bezos is staggeringly wealthy, his employees are not

In 2017, Amazon reported nearly $178 billion in revenue. This success helped Bezos earn his title as the richest man of all time. According to Forbes, his net worth is $165.2 billion.

Amazon employs about 566,000 people around the world. That number does not include the independent contractors and third-party workers that help it operate, like drivers with Amazon Flex, who are not technically employees but are paid to deliver Amazon packages with their own cars. The company is often celebrated as a major source of employment opportunities, especially in its hometown of Seattle, where 40,000 people work for Amazon.

“You spend 10 hours on foot, there’s no windows in the place, and you’re not allowed to talk to people — there’s no interactions allowed,” he said. “I got a sense in no time at all that they work people to death, or until they get too tired to keep working. After two months, I felt I couldn’t work there and maintain a healthy state of mind.”

Last year, only a few months after Amazon dropped $13.4 billion to buy the upscale grocery chain Whole Foods, data found that one in three Amazon employees living in Arizona must rely on food stamps because they do not earn a living wage.
0 Replies
1
Reply Sun 2 Sep, 2018 12:23 pm
@izzythepush,
Perhaps, but you are confusing income inequality with aristocracy, which is a legal status. We don't have people inherit titles, we don't require people to have a title to serve in parts of the legislature. You do.

The income inequality of the US, which started accelerating during the early Reagan years, is worse than in the UK but the the UK's rise is steeper and started in the late seventies. So you haven't bridged the US' lead there, but you are coming up fast. 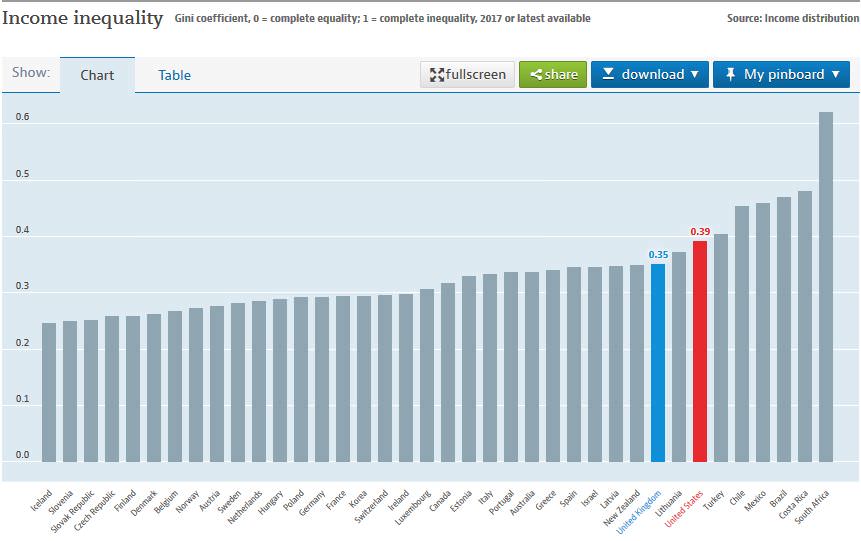