Forums: History, King Arthur, Avalon
Email this Topic • Print this Page
Reply Sun 18 Feb, 2018 03:34 pm
Avalon is a legendary island featured in the Arthurian legend. It is the place where King Arthur's sword Excalibur was forged and later where Arthur was taken to recover from his wounds after the "Battle of Camlann".

"What was Avalon's role in medieval literature, then? Was it magical or metaphorical? Was it both? Was it entirely unrelated to Arthur?"

Check the article out and I'd like to hear your opinions. 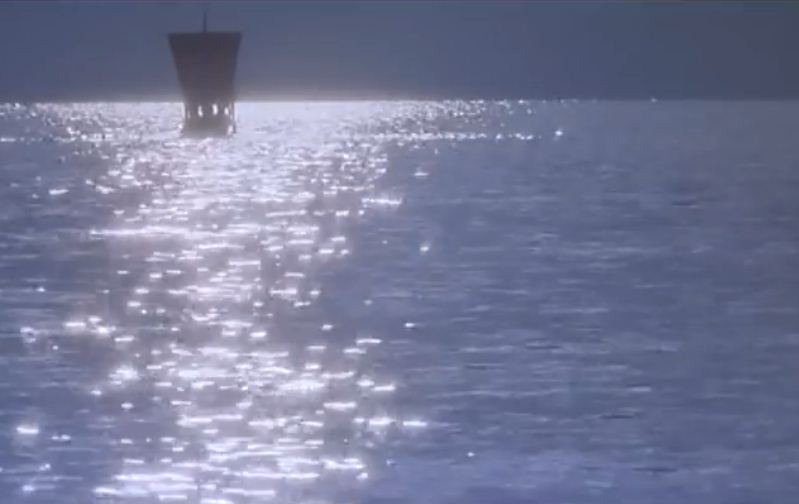 0 Replies
1
Reply Sun 18 Feb, 2018 04:07 pm
The last scene of Excalibur. Arthur has received his mortal wound and gives the final instructions to Percival to dispose of the sword Excalibur. It's all done to the music of Wagner's music, "Siegfried's funeral March". 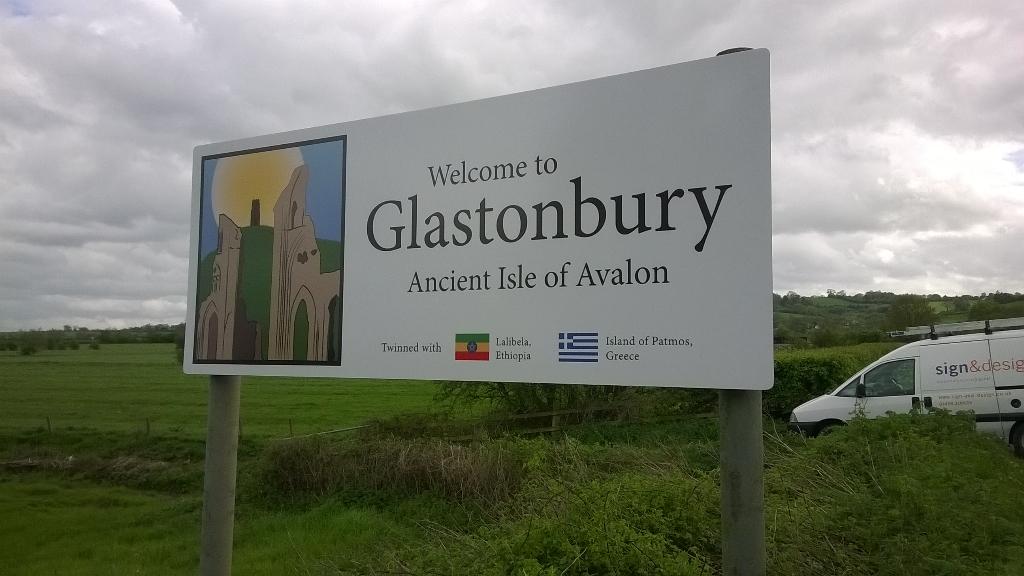 It used to be an island. 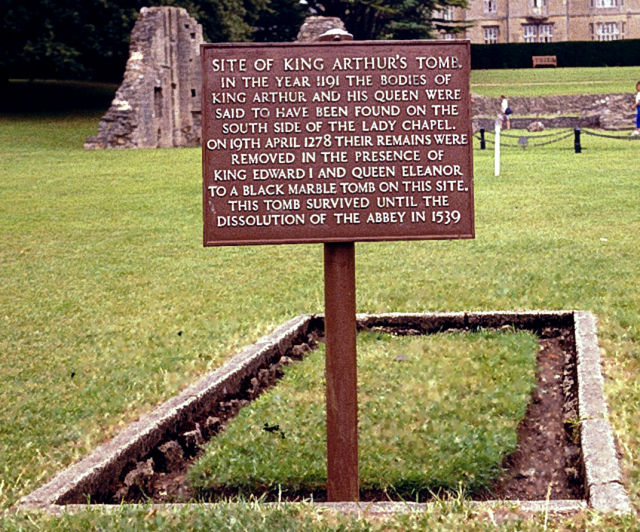 There's loads of myths and legends surrounding the place, not just Arthurian but Christian. Joseph of Arimathea was supposed to have sailed there, first with Jesus, then with the Holy Grail. His stick is supposed to have srouted roots and given us the Glastonbury thorn, then there's the Gargoyle.

There's a **** ton of stuff.
0 Replies
2
Reply Sun 18 Feb, 2018 04:42 pm
Nobody is sure that the Glastonbury area is really the legendary "Avalon". I got stoned in Bristol with a lot of people around 1970 who were sure that it was. One guy said that when he was tripping on LSD on the Tor he got a "spirit message" from King Arthur, but he couldn't tell me what it was. I mean he couldn't remember it, not that he was sworn to secrecy. Those were the days.

1 Reply
2
Reply Sun 18 Feb, 2018 04:46 pm
@centrox,
That's the thing about myths and legends, you can't be sure about anything. There's a very strong northern claim, Carlisle is also touted as Camelot.
1 Reply
1
Reply Sun 18 Feb, 2018 04:53 pm
People got all mystical about Silbury Hill, and especially West Kennet Long Barrow. The latter makes even me feel a bit spooky.

"What was Avalon's role in medieval literature, then? Was it magical or metaphorical? Was it both?

I'd not be surprised if there were some metaphorical aspects as well.

Was it entirely unrelated to Arthur?"

In literature, Arthur's sword was forged there, he went there to recover from his wounds and was never heard from again, and during his life a major adversary originated from the island. Clearly the Arthur from literature had some relation to the island from literature.
0 Replies
1
Reply Mon 19 Feb, 2018 04:12 pm
@izzythepush,
Quote:

That's the thing about myths and legends

I bumped into a great definition of "legend" recently (can't recall where but unexpectedly smart from that speaker, I thought)

A legend is a rumor plus time.

I studied some Arthurian tales in university. "The Green Knight" was one. But there was another that blew me away for its sophisticated address to moral questions. All the tales have this as a theme. The tale that really caught my attention (can't recall the title) involved a knight who was out on a knightly quest. Of course, a knight doesn't fail. But on the other hand, how does he behave throughout? If not loyal, brave and always chivalrous, he fails.

This knight comes upon a problem that he cannot solve without help. An old haggard and homely woman came up. She said that she could help him in his present situation if he would marry her after. He agreed. She solved the problem. And he married her. And on the wedding night, she said, "because you were honest and chivalrous...for half of every day, I will bee this" and she changed into an incredibly, irresistingly beautiful young woman. She asked, "Now, do you want me like this in the day time or the night time.

So this guy has to choose. If he picks the young beautiful woman for nights, then throughout all of his public life, every day, he'll have the old starlingly ugly witch woman on his arm. No one will want to come over and visit. Do you bring her to the office Christmas Party? On the other hand, thinking of crawling into bed each night...

It's a moral hypothetical. Perhaps a bit naughty but whoever made up that tale was an Englishman, so....
2 Replies
1
Reply Mon 19 Feb, 2018 05:47 pm
@blatham,
That's the Wife of Bath's Tale from Chaucer. Or a reworking of it.
0 Replies
1
Reply Tue 20 Feb, 2018 01:08 am
@blatham,
Sir Gawain and the Green Knight (in Middle English, Sir Gawayn and þe Grene Knyȝt) is certainly an Arthurian romance, dated to the early 14th century. It has nothing to do, however, with the narrative canon established by Thomas Malory in his Le Morte d'Arthur. written in the late 15th century, and printed and published by Caxton in 1485. Sir Gawain and the Green Knight makes no reference to the death of Arthur, nor to his burial on the putative Isle of Avalon.

The entire Arthurian romance cycle was, and remains, the most fertile of literary traditions in Europe. The historical evidence is that no such British king ever existed. Gildas, a British monk who lived in Brittany and who asserts that he was born in Britain in the same year as the battle of Badon Hill does not say who commanded at that pivotal battle. Gildas never mentions any King Arthur. Gildas was well known in his own day (late 5th century and early 6th century), and was well respected in church literary and historical circles. In his narrative, De Excidio et Conquestu Britanniae (On the Ruin and Conquest of Britain) he refers to both people and events which are known to have existed or to have taken place from numerous church sources, for as well as anything from that era can be known. It is also worth noting at this point that the name Arthur does occur from that period--other than as an Irish name, the name of several prominent Irish invaders. (Many of those desperate to claim that this King Arthur did exist tie themselves in linguistic knots to attempt to derive the name from the British language of the 5th century.) It is also worth noting that at least one complete copy of the Gildas history has been in the possession of the church, ostensibly since the late 6th century, not long after he wrote it,

In the late 9th century, a manuscript was prepared by a monk thought to have been named Nennius (no proof of his existence is to be found--unlike Gildas). He is attributed as the author of Historia Brittonum, The History of Britain. There is no reference to either the author or the work before the mid-10th century. In the basic narrative, Nennius never mentions any King Arthur. There is an "appendix" which is attributed to Nennius, The Twelve Victories of Arthur.. No copy of either Nennius' History or the appendix exists from earlier than the 14th century. I have an opinion on the origin of the "appendix," but won't rehearse it here.

In Annales Cambriae (The Annals of Wales) and the Welsh Triads, Arthur is mentioned. No copies of either document exist from any earlier than the 14th century.

The greatest Arthurian manuscript in Britain prior to Malory is De gestis Britonum (On the Deeds of the Britons), later popularized as Historia regum Britanniae (The History of the Kings of Britain), written by Geoffrey of Monmouth in the early 12th century. It is so wildly, extravagantly implausible as to be an embarrassment to historians. When it refers to historical events recorded in other sources, it almost invariably disagrees, and appears to be wholly unreliable. It was damned popular, though. It was so silly, historically speaking, that it doesn't matter how old any manuscript copies are.

Chrétien de Troyes writing later in the same century, and creator of Lancelot, may have used Geoffrey of Monmouth as a source. Marie de France wrote a series of short tales about the Arthurian knights, probably in the late 12th and early 13th centuries--and probably while living in England as they are written in Anglo-Norman. In both cases, the manuscripts from at or near the time of their composition are available (they were both "best sellers"), and no one considers them to be history, just popular entertainment.

Therefore, the Arthurian tales, including the burial of Arthur on the "Isle of Avalon," are certainly very important in medieval literature. History they ain't. It is my settled conviction, based on almost 50 years of reading (certainly not continuously, although very widely) is that King Arthur is only a creature of imagination. If anyone was a type for the King Arthur character, it would have been Ambrosius Aurelianus, an historically well-established individual. He is mentioned by both Gildas and Nennius. The probably spurious appendix of Nennius could be read as a description of the campaigns of Ambrosius Aurelianus against the Saxons.

The final irony in all of this is that Arthur is revered by the Anglo-Saxons, when if he had existed, he would have been he who dealt them their most stunning defeat. Even the Anglo-Saxon Chronicles, which don't mention Badon Hill, are silent about Saxon advances against the British for more than two generations. Gildas asserts that the Saxons were driven back for about that period of time--but, of course, Gildas don't know no steenking King Arthur.
1 Reply
1
Reply Tue 20 Feb, 2018 01:51 am
I had to go upstairs to get a book that this question reminded me of. The Arthurian tales remain a fruitful and prolific source of publications. The most succinct, and relatively brief account of the sources which I have seen is A Brief History of King Arthur by Mike Ashley, Constable and Robinson, Ltd., London, 2005. It was published in the United States in 2010, but I don't have the publishing information on that.

The blurb on the back says: "Historian Mike Ashley . . . establishes that the true historical Arthur did exist, and is distantly related to the British royal family." Ashley does neither of those things. They're putting make up on a pig. It is not exciting or romantic, and is dry, as dry as one can expect from a scholarly review of sources. I highly recommend it.
0 Replies
1
Reply Tue 20 Feb, 2018 02:49 am
Within sight of Glastonbury there's Cadbury Castle, another place with a strong claim to being Camelot. If nothing else it's definitely iron age. 0 Replies
1
Reply Tue 20 Feb, 2018 02:55 am
Even closer to home, for me anyway there's Winchester home of the round table. It actually dates back to Edward III but was given a paint job under Henry VIII to incorporate the Tudor rose. 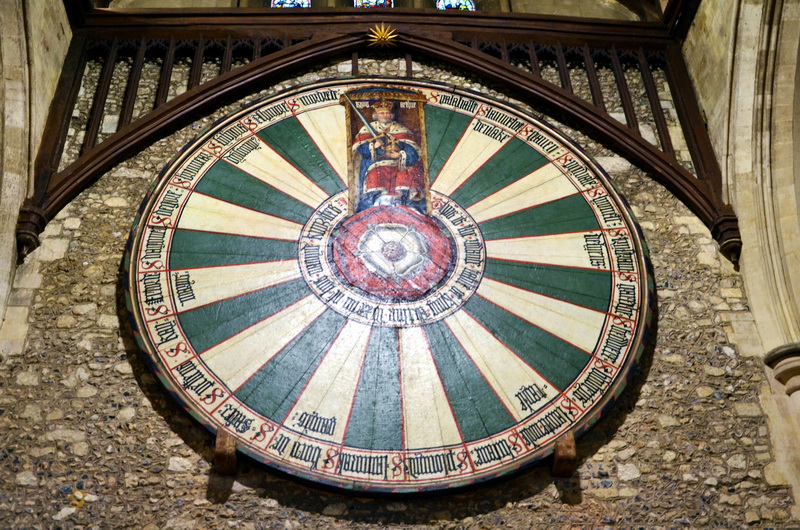 Winchester is the home of two kings, one legendary, the other one very real indeed, Alfred, the only English king with the title great.

0 Replies
1
Reply Tue 20 Feb, 2018 03:31 am
Today Arthurian legend is tied up with neo Druidism. The chief druid pictured calls himself Arthur and claims to be a reincarnation of the Arthur.

The chief druid pictured calls himself Arthur and claims to be a reincarnation of the Arthur.

Ever notice how those who believe they've lived prior lives tend to recall being Abe Lincoln or Shakespeare or Lancelot or Pericles. I only recall being prostitutes or window cleaners.

@Izzy... did I really conflate the arthurian tale with the wife of bath's story? Jesus. But I don't think it follows that I have to quit smoking weed.

@Setanta... you amaze me, fella. If google ever crashes, mankind is going to have to wire you into the system.
1 Reply
1
Reply Tue 20 Feb, 2018 06:53 am
@blatham,
I think the Wife of Bath's tale is about an Arthurian Knight, so no conflation. There's a crossover.

Ever notice how those who believe they've lived prior lives tend to recall being Abe Lincoln or Shakespeare or Lancelot or Pericles.

Not Arnold Rimmer. Relevant bit starts at 5.24 but it's all good.

1 Reply
1
Reply Tue 20 Feb, 2018 01:28 pm
Arthur has obtained a mythical status. Just like Jesus it's irrelevant whether he really existed or not, he represents something in all of us, if we can just recognize it. That's the power of myth.
1 Reply