There was a debate and all the candidates were very soft on each other.

Chertorivsky campaigned throughly around the city, had a lot of ads in social media, proposed to legalize mariguana home gardens for self consumption, to move city government agencies to the East side of the city -where most people live- when the new airport is finished, sports programs for the youth, etc etc.
He also tried to act like some one from the 'hood, he even changed his tone to sound more "popular".
Only at the end he started to critisize Barrales.

Ahued campaigned at the beginning, but faded. Went from open spaces to more cozy ones.

Barrales, instead, started late, preferred to go to her party's strongholds, managed to gather a multitude of women, and stressed her campaign on civil and human rights.

The (non-official) poll I have read says:
Barrales is better known (87% vs 74% Chertorivski and 47% Ahued)
Chertorivski has a more favorable political image: +11.6 (the difference between those who have a good opinion of him and those who have a bad one), against Ahued's +6.6 and Barrales -10.7%
Chertorivski is a bit more competitive than Barrales against Morena's candidate Sheinbaum, but they all lose by a double digit margin.
Barrales is more prone to be preferred by PRD members (57%) and PAN members (49%)

The latest poll has:


Sheinbaum started her campaign with a god motto: "Innovation and hope", and bettering the city's collapsed mobility; she will stress on the fact that she's a scientist. I think that's a better strategy than playing 'hood.. 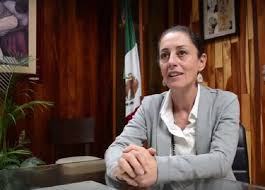 Poor Mikel Arriola is a very nice guy, but he's accumulating negative opinions because of the mere fact that he's the PRI candidate.
His campaign, I must add, works only for an ideological minority: he'll change "20 years of bad left-wing governments".
The city is evidently better now than 20 years ago.

I hope the pictures tell you something about the candidates.

In any case, I think each Mexico City (pre)candidate is better than his presidential counterpart.
0 Replies
2
Reply Tue 16 Jan, 2018 09:54 pm
As for the Presidential campaign, President Peña Nieto has started to have his opinions heard.

He said yesterday that to pardon the criminals (of the drug cartels, as AMLO has suggested) is treason to Mexico. Today, that he understands there is social anger, but said that "if the anger reflects in future (electoral) decisions, we'll have anguish".
In Mexico, it's not common for the President to comment on the elections. He's supposed to be above the parties (but obviouly, he is not).

A picture of the 3 candidates, so you know their faces:

0 Replies
1
Reply Wed 17 Jan, 2018 12:50 pm
@fbaezer,
Margarita Zavala's brother started a campaign in change.org to strip John Ackerman of his Mexican nationality and expell him from Mexico, because "he's a Russian agent".
Mexicans can be xenophobes, too.

A cartoonist started another campaign in change.org to expell Juan Ignacio Zavala from Mexico "por pendejo".
The cartoonist's initiave is gathering signatures at a faster pace. The Russians are coming!
They want to influence the Mexican election, says the Washington Post

I said it first, but in Spanish:

When he talks about "pirrurris" or "whites", AMLO is pressing the "revolutionary nationalism" button. And also the economic-social resentfulness button, especially with the mestizo lower-middle class who feels left behind.

So, if Moscow were to favor one presidential candidate who would it be?


The Washington Post's article implies it would be AMLO, through the "Ackerman connection". No proof of anything, though.
0 Replies
1
Reply Wed 17 Jan, 2018 05:03 pm
@InfraBlue,
InfraBlue wrote:

I've also heard the term "quirrurris." Is it used in the same way as "pirrurris"?

Alejandra Barrales will be their candidate for Mexico City, as expected.

Sheinbaum and her "Russian plot comrades" celebrate that the Front's candidate is Barrales, not Chertorivski:

AMLO's field has two notable additions.
One is former soccer star Cuauhtémoc Blanco, who will run for governor of Morelos, propelled by the party of Christian Evangelicals. He was mayor of Cuernavaca, with another party. And did a terrible job. But he's a star.
The other is senator Gabriela Cuevas, formerly of PAN, and very outspoken against AMLO. She was not granted a place in the ballot by her party, so she switched sides. The fact is that she wants to keep the presidency of the Inter-Parlamentary Union (an international organization of the parliaments of 178 sovereign states; virtually everyone but the USA)-
These 2 additions have caused concern among left-wing supporters of AMLO. But, concern or not, they still adore their leader. Some, who months ago praised his congruence, now praise his pragmatism.

AMLO took the Russian factor with humor and referred to himself as Andrés Manuelovich.
Some of his fascist followers did not, and sent a vicious anti-semitic social media attack against León Krauze, a journalist who published a piece about the Russian meddling in Mexican elections on The Washington Post.

The Federal government is trying to prevent a major showdown between them and the governor of Chihuahua (Javier Corral, PAN), who accuses the Federation of withholding money for the State because of his prosecution of former (PRI) governor César Duarte.
Corral is staging a March to Mexico City (it's a looong way from Chihuahua), which has, of course, electoral resonance.
The government has now issued an extraditation procedure against bad hombre Duarte, who fled to the USA.

The fake Greens are in the verge of breaking with PRI in their stronghold state, Chiapas. The Chiapas Greens disapprove of the coalition's candidate for governor, Roberto Albores (PRI) and want one of their own.
The Greens and PANAL (the Teachers' Union party) also broke with PRI in the State of Mexico, the most populated of all, because of broken promises by the governor.

It seems very possible that populist Jaime Rodríguez El Bronco, right winger Margarita Zavala and left-winger Armando Rios Piter El Jaguar will be on the Presidential ballot as Independents.
Surprisingly, El Jaguar is the one who is nearest to the accomplishment. He already has surpassed the threshold in 15 out of 17 states needed.
He had a good strategy: he pinpointed only 22 states to work for signatures, practically forgot the other 10 and worked on the dispersion rules, which the others didn't.
If El Jaguar is on the ballot, he'll be the only left-winger running for President (though many in Mexico and elsewhere believe AMLO is a leftist, I do not).

A few of his phrases:

"My horse eats less than my broad"
"I believe in marriage. Marriage is betweeen a man and a woman. I don't believe in the other stupid stuff"
"Nobody loves a fat girl"
"I am the lemon in the politicians' hemorrhoids"
"If I don't deliver, you can hang me in the plaza"
"A mother is more a mother if she has her children the natural way, not by caesarean section"
(speaking to children) "Hug your daddy, who loves you very much, now that you have the chance. Dad is Santa Claus, did you know that?"
"I carry my own cell phone, I don't have a faggot to do it for me, I have many friends, but I don't have assistants or secretaries".