Are there still people who really believe that we have send men to the moon?

Forums: Science And Math
Email this Topic • Print this Page
-2
Reply Sun 26 Nov, 2017 04:18 am
@Hodgarrik,
Thank you Hodgarrik, your ideas are compelling.

Despite what the naysayers say, keep up the good work.

Are there other conspiracies of which you are aware?

The physicist David Robert Grimes has estimated the time it would take for a conspiracy to be exposed, based on the number of people involved. His calculations used data from verified conspiracy events (ones that did happen) such as The National Security Agency (NSA) PRISM affair, Tuskegee Syphilis Experiment and the FBI forensic scandal.

Moon landing hoax would require the involvement of 411,000 people and would be exposed within 3.68 years;

Climate-change fraud would require 405,000 people and would be exposed within 3.70 years;

Vaccination conspiracy would require a minimum of 22,000 people (without drug companies) and would be exposed within at least 3.15 years and at most 34.78 years depending on the number involved;

Suppressed cancer cure conspiracy would require 714,000 people and would be exposed within 3.17 years.

Do you u believe him so blindly ?

Don't you see the huge flaws in his 'reasoning'?

I see plenty in yours, and I have a theory about them (not a conspiracy theory). Christopher Hitchens described conspiracy theory as the "exhaust fumes of democracy": the unavoidable result of a large amount of information circulating among a large number of people.

Conspiracy theories may be emotionally satisfying, by assigning blame to a group to which the theorist does not belong and so absolving the theorist of moral or political responsibility in society. Likewise, Roger Cohen writing for The New York Times has said that, "captive minds; ... resort to conspiracy theory because it is the ultimate refuge of the powerless. If you cannot change your own life, it must be that some greater force controls the world."

Sociological historian Holger Herwig found in studying German explanations for the origins of World War I, "Those events that are most important are hardest to understand, because they attract the greatest attention from myth makers and charlatans."

And you really can't use the 'mathematical argument' at all because the whole thing is so deeply flawed it is unbelievable.

And conspiracy emotional satisfying? OMG you really have no clue at all.

You know , you never adress the right question,if it it is true or not, that really is the only thing that matters, I don't give a **** what some sociologist or whatever says or writes, why would I? it is of no importance at all.
0 Replies
4
Reply Sun 26 Nov, 2017 11:05 am
@centrox,
look, rather than arguing with this idiot, lets just raise the money to send him on SS1 as a tourist, and then he can take his own pictures of the Apollo 17 landing site nd see the footprint and car tracks.
Every couple of years we get these idiot clowns who jerk off on the web denying science ,9-11 causes or the moon program just to draw responses. I say, lets send him out there, the dickhead.
2 Replies
-4
Reply Sun 26 Nov, 2017 11:30 am
@farmerman,
something I wrote, farmerman?

oh and ad hominems don't count. You didn't know that I presume?

And aren't you that guy that believes in the fairy tales of evolution????
0 Replies
2
Reply Sun 26 Nov, 2017 11:36 am
@centrox,
Quirks & Quarks recently did an interesting program on the growth of conspiracy theories. 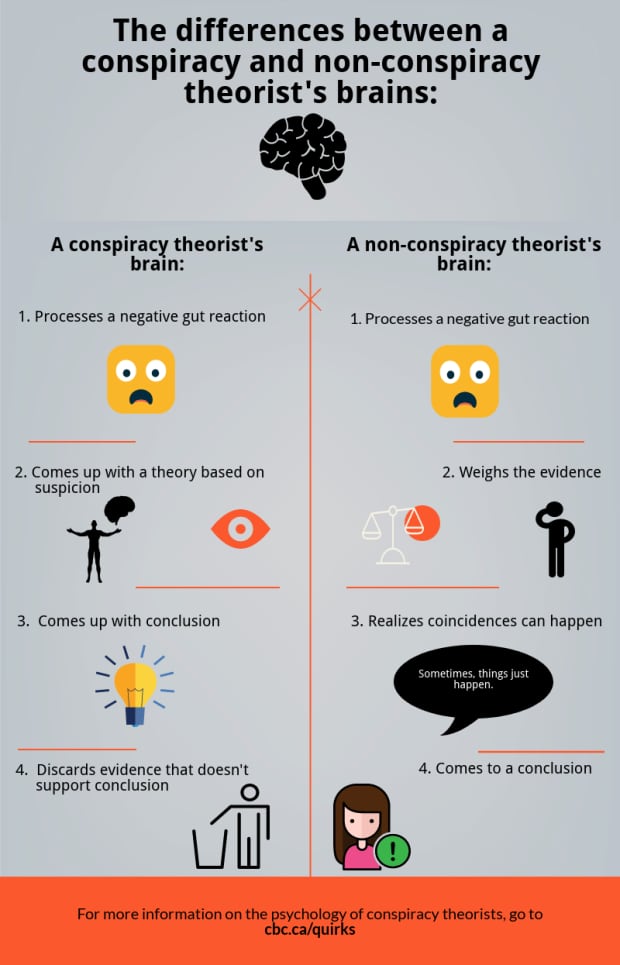 the podcast is linked here, as well as a partial transcript

I found it an interesting listen.


there are some good links at the page , tucked into the transcript

BM: What do you do when you come up with someone who has a conspiracy theory, like humans didn't land on the moon? How can you have a rational conversation with them?

JP: That's a very good question, and I think it depends on who you're dealing with. There are many people who are open to a conspiratorial explanation, but also open to a non-conspiratorial explanation. I think it's very possible to have a good conversation where you evaluate all the evidence. But if someone is highly convinced of a certain truth, like humans never landed on the moon and that's a fact and there's no other way around it, then I think it's very difficult to change their mind.

Paper in the journal European Journal of Social Psychology

0 Replies
3
Reply Sun 26 Nov, 2017 11:37 am
@farmerman,
The point is that the troll doesn't actually need to believe his rubbish in order to play his communication\ control game. All that matters is that someone is paying him attention. Notice his 'you can't leave can you ' comments.
0 Replies
2
Reply Sun 26 Nov, 2017 11:49 am
this doc can only be streamed in Canada but you can look up the researchers and look at their work

Featuring outspoken US publisher of Skeptic Magazine, Dr. Michael Shermer, who uses scientific methods to question if there is truth behind the theories with his "Baloney Detection Kit" and British psychologist Patrick Leman who explains the social needs for conspiracy theorists' beliefs, Conspiracy Rising takes a hard, penetrating look at the psycho-social and philosophical roots of conspiracy theories, examining who tends to believe in them and why.


I bolded my favourite bit

"We're all conspiracy theorists, some of us are just better at hiding it than others" - Rob Brotherton

Rob Brotherton has been studying conspiracy theories -- where they come from and why we believe in them -- for the better part of a decade. He is an Adjunct Assistant Professor of Psychology at Barnard College and the author of "Suspicious Minds: Why We Believe Conspiracy Theories".

While it's easy to dismiss conspiracy theorists as tin foil hat wearers (or if you are a truther, to dismiss mainstream society as sheeple), Brotherton explains that people may be predisposed to believing conspiracy theories because of evolutionary traits. Furthermore, everyone has these qualities, some of us just more so than others.

Profile of a conspiracy theorist

Paranoid… but only slightly more paranoid than the average person.
Open minded. They'll try new things -- including unorthodox ideas.
Consistent. A person who believes one conspiracy theory tends to believe others, even if the theories have nothing in common.
So where do conspiracy theories come from? Brotherton says they're the result of people trying to explain the world around them by identifying -- and misidentifying -- patterns. Essentially, conspiracy theories are a product of our natural evolutionary biases.

"Conspiracy theories fit with a lot of our biases. We're biased towards seeing patterns -- finding meaning -- even if it's not really out there. We're biased towards seeing intentions, rather than just assuming that things happen by accident; we tend to assume that somebody wanted it to happen. We're biased towards thinking that if something big happens in the world it has a big cause. We don't like to think that big events -- like the assassination of a president -- could have been caused by something as insignificant as one slightly unbalanced guy that nobody has ever heard of before. We have lots of these biases that are built into our brains for probably good evolutionary reasons, but a consequence is that sometimes we arrive at mistaken beliefs. Sometimes we might buy into a conspiracy theory regardless of whether it's really true or not." - Rob Brotherton

1 Reply
-4
Reply Sun 26 Nov, 2017 12:12 pm
The funny thing is, that conspiracy theories and theorists are being rejected by reflex action.

Never is there looking into the conspiracy whether it is true or not.

And really, that is the only thing that matters. Wheter it is true or not.

It is funny to read the above posting where it is postulated that the conspiracy theorist doesn't think, while in reality you see that the non-conspiracy 'theorist' really doesn't think and reject by refelx action.

To see this, the only thing you have to do is to look at these threads and see how full of ridicule they are towads the conspiracy theorist, and have no arguments at all!


It is getting all hilarious.


btw what do you call a non-conspiracy theorist? an accidental-theorist?

Look in the mirror. You act just like a conspiracy theorist too where you discard evidence that doesn't support your beliefs.

What I really don't understand is why you people need to be so nasty on a thread that really doesn't matter. There is a difference between popular beliefs and unpopular beliefs. There are very few people who are able to question their own belief system.


2 Replies
-2
Reply Sun 26 Nov, 2017 03:01 pm
@maxdancona,
I think the real difference is that some people are willing to take unpopular beliefs, and others are confident taking popular beliefs. Very few people look at the evidence.

Then he asked people to list the evidence that the Earth rotated around the Sun (and not the other way around).....

Very few people actually look beyond their own belief system. You believe what you are told to believe.

My real point is that the nastiness here is unnecessary.

Why would the USA do that?

You also made mention of there being no third parties. The USSR, China, Japan, India, The independent media, every major tertiary institution in the world along with thousands of highly skilled and committed enthusiasts are all third parties. And every one of them acknowledges the landings, by humans, to be real. A conspiracy would have to involve not just the US government and it's agencies, but all of the other interested parties. Again, this would take far more effort than just going there for real.
0 Replies
3
Reply Sun 26 Nov, 2017 04:11 pm
@maxdancona,
"Beliefs" doesnt enter it. Its fact v denial. Any kid can get the data.
Most eventually do. As for Those that deny , well, Ive been learning the why's that power up their positions. I dont think its nastiness, especially when the op began his interactions here by being a smart ass.

It is getting all hilarious.

I agree, thank you. Are you a religious person?

John Williams conducts Theme From The Accidental Theorist
1 Reply
-4
Reply Sun 26 Nov, 2017 05:55 pm
@farmerman,
I am talking about upper class, middle aged White people. They have their own mythology that is equally flawed. They hold conspiracy theories about GMOs, and rape statistics and indigenous cultures.

The hypocrisy of the politically correct White Middle class complaining about the conspiracy thinking of other people is frustrating.
1 Reply
-4
Reply Mon 27 Nov, 2017 12:27 am
maxdancona is really spot on! And thank you for your postings

it is really all about belief!

Wheter peopl;e believe that or not, it is true.

Most people are programmed into a lot of false beliefs by education, media and so forth.

And they are also programmed into the belief that they are not programmed.

Hence they believ they tyhink about things while in realioty they are programmed not to think and beleivve outside some parameters,

That makes them easier to control.

And what maxdancona sees is how we, people, even have been programmed to 'police each other'

Anyone who is 'out of line" , like me, has to be rediculed condemned and what have you.

sheep don't have that, they need a dog to police them!


Telling eh?!
0 Replies
-3
Reply Mon 27 Nov, 2017 12:48 am
@ekename,
No I am not religious at all, because also the religions were invented to control the masses. when religions didn't longer work 'science' was invented.

It really is all about control.

we are indoctrinated from cradle to grave with programming so we keep in line,