Belief in G-d versus evolution?

How can a half theory be better than a full theory? These supposed greatest minds in history didn’t take into account consciousness “The Anointed”

Weber’s molecular theory of magnetism is not even a fraction of the complete theory needed to explain the origin of this universe and it’s continued growth/evolution. To have consciousness, you must have a conscious being: Who is your conscious being?

At least the magnetism theory is balanced. It is clearly evident that in nature a + and - force is NOT the same. The accepted scientific model is incorrect because it is one sided/unbalanced “The Anointed”

And how many idiots have you convinced to believe your BS?

“Black holes”…”White holes” …..whatever ……….As far as consciousness is concerned…..they are just HOLES with, if you want, your black and white in both.

Only in the conscious of idiotic amateurs are there no Black holes, certainly not in the minds of the greatest scientists of our day, which you put your puny self above.

Einstein never took consciousness into account in his equations “ The Anointed”.

AH, but Einstein did take consciousness into account, he saw the intelligent design within the creation, and he knew that intelligence (THE GREAT THOUGHT) had created the cosmos.

Consciousness balances both sides of the equation but remains separate from it.

Consciousness=THE GREAT THOGHT, cannot remain separate from all that it is.

As Pioneering physicist Sir James Jeans wrote: “The stream of knowledge is heading toward a non-mechanical reality; the universe begins to look more like ‘A GREAT THOUGHT’ than like a great machine. Mind no longer appears to be an accidental intruder into the realm of matter, we ought rather hail it as the creator and governor of the realm of matter. (R. C. Henry, “The Mental Universe”; Nature 436:29, 2005)

Just as electromagnetic fields are separate from big bangs and big crunches according to the magnetism theory.

Science needs to focus more on consciousness. You can’t avoid/neglect it.

Correct! Science needs to focus more on ‘THE GREAT THOUGHT’ which is the 'COLLECTIVE CONSCIOUSNESS' of all that it has become. 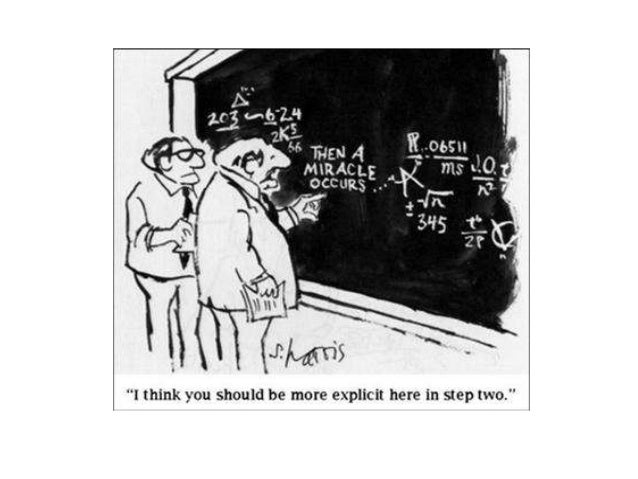 I’m not ignorant of science or the scriptures “The Anointed”

How can you say that you are not ignorant of science or scripture, when you prove beyond all doubt in every post that you submit, that you are.

According to the Christian scriptures Christ was without sin from birth…so perfect.

Here is just one example of your ignorance: Hebrews 5: 7-10; In his life on earth Jesus made his prayers and requests with loud cries and tears to God, who could save him from death. Because he was humble and devoted, God heard him. But even though he was ‘A’ Son of God, (Not God’s son or the son of God. But ‘A’ son of God.) he learnt through his sufferings to be obedient. When he was made perfect, he became the source of eternal salvation for all those who obey him, and God declared him to be high priest, in the priestly order of Melchizedek.

In defence for claiming to be the son of God, in John 10: 34; Jesus answered, “It is written in your own Law that God said, ‘You are gods.’ We know that what the scripture says is true for ever; and God called those people gods, the people to whom his message was given. As for me, the Father ‘CHOSE’ me and sent me into the world. (To speak HIS WORDS, in HIS NAME)

It was the God of our ancestors, the God of Abraham, Isaac, and Jacob, who said to Moses in Deuteronomy 18: 18-19; "I will send them a prophet like you from among their own people; I will put MY WORDS in his mouth, and he shall speak to them all that I command, and whosoever will not heed MY WORDS, which he shall speak in MY NAME, I will surely punish, etc.”

That prophet was the man Jesus.

No one chooses for himself the honour of being a high priest. It is only by God's call that a man is made a high priest — just as Aaron was.

In the same way, Jesus did not take upon himself the honour of being a high priest. Instead, after he had been brought to perfection through his suffering, God said to him: “You are my Son; today I have become your Father.” Or, as was said in Luke 3: 22; when Jesus was baptised and filled with the spirit of our Lord God and saviour; “You are my son, THIS DAY I have begotten thee.

He also said in another place, “You will be a priest for ever, in the priestly order of Melchizedek.”

0 Replies
-1
Reply Fri 4 Mar, 2022 12:43 am
@The Anointed,
You prove time and time again “The Anointed” that you are ignorant of the scriptures/science and have absolutely no understanding of consciousness.

Consciousness has nothing to do with thoughts .

You keep rambling on about THE GREAT THOUGHT.You need to learn more about consciousness, just like Einstein and Hawking needed to.

You re not a thought “The Anointed”,you just have thoughts,just as you are not consciousness…….you become AWARE of the 2 off consciousness states and CONTROL them.

If you don’t, then you remain a “prisoner of consciousness” in UNAWARENESS being controlled which results in all your weird ideas.

3 Replies
-2
Reply Fri 4 Mar, 2022 01:02 am
@Jasper10,
Science has its one sided theory and this is what dictates your thoughts “the anointed”.Your view is that it is a theory that has to be right.Why? It’s a one sided theory.

We don’t need one sided theories, we need full theories that make sense.

The magnetic fields were around at the same time as big bangs/big crunches or else spin would not be possible that produces the electrical inputs that produces the electromagnetic fields that produces the spin, that produces the electromagnetic forces which interact in ways that produce balanced push/pull forces that hold matter together OR produce unbalanced magnetic force interactions resulting in big bangs and big crunches. …………haha………. now get your head around that one……..,,,….so says the MAGNETISM THEORY.
1 Reply
-2
Reply Fri 4 Mar, 2022 01:15 am
@Jasper10,
If you take consciousness into account then there is no such thing as black or white holes……no there are just holes……..so says the MAGNETISM THEORY.
0 Replies
-2
Reply Fri 4 Mar, 2022 02:42 am
@Jasper10,
Code:[b]You prove time and time again “The Anointed” that you are ignorant of the scriptures/science and have absolutely no understanding of consciousness.[/b]

I see that you are still ranting your rubbishing rhetoric, claiming that you have a greater mind than either Albert Einstein or Stephen Hawking, you poor self delusional fool.

You, I, and all that exist, are no more than thoughts in the eternal evolving mind, and yes, you are no more than a prisoner within the Eternal mind, which goes through periods of rest and activity, and during its rest period, not even space exists let alone any electromagnetic energy or magnetism.

He, the eternal evolving mind, is the essential divine reality of the universe, the sternl spirit from which all being originates and to which all must return at the close of each period of activity.
1 Reply
-2
Reply Fri 4 Mar, 2022 03:09 am
@The Anointed,
Chill........ The Anointed.....the magnetism theory is just a theory....but is a full theory and not a half theory and it can be backed up with established science.

You don't have an absolute understanding of consciousness "The Anointed".....that much is obvious......you are still stuck in unawareness if you think you are just a thought....

You don't have sufficient knowledge or awareness to be able to exercise any control whatsoever over the consciousness states or the thoughts/data contained within this states.

And I'm still waiting to hear 'YOUR' definition of Consciousness, because I don't believe that you have a clue.

Can there be consciousness without a living being, being aware of the existence?

Did the consciousness of which you speak have a beginning, does it have an end, or is it an eternal mind, a GREAT EVERLASTING EVOLVING THOUGHT that is aware of all that it is?

Come on mate, define for us what you believe consciousness is, from where it came and does it ever cease to exist?
1 Reply
-2
Reply Fri 4 Mar, 2022 04:51 am
@The Anointed,
Come on mate, get farmerman to define what consciousness is for you and how it relates to the evolution theory. I've asked him...nothing come back yet.

Why is the Magnetism theory a BS theory?

Consciousness has nothing to do with thoughts The Anointed.

Consciousness can be defined more as a "PRESENCE".

Nothing was present before the B.B, no space, no momentum, no time, so what is the "PRESENCE" you speak of?

You are making stuff up now "The Anointed".....Guessing stuff is not scientific my friend.

0 Replies
2
Reply Fri 4 Mar, 2022 06:00 am
@Jasper10,
since evolution is primarily a random biochemical reaction to environmntal change, consider the "big 5"extintions, "Consciousness had littl to do with them. Evidence supports me not you.

1 Reply
-2
Reply Fri 4 Mar, 2022 06:08 am
@farmerman,
The question was how does evolution explain consciousness?.....does the evolution theory just ignore consciousness?

Evidences can be interpreted differently farmerman ..............you just have your interpretations....that's all.

Correct! There is the interpretation of some of our greatest scientific minds which interpretations support the biblical belief that we live in an eternal evolving oscillating universe, which expansion of each cycle, begins with a singularity, and the close of each cycle of activity ends with the singularity into which all the information of the previous cycle has been gathered.

That eternal evolving consciousness or 'GREAT THOUGHT' Having nether beginning or end.

Because farmerman's interpretation of evolution is confined primarily to the evolution of life forms, from what a appears to be lifeless matter, he has actually no idea whatsoever, that those life forms are created from and by that which has neither beginning or end,

The term "evolution" usually refers to the biological evolution of living things. But the processes by which planets, stars, galaxies, and the universe form and change (EVOLVE) over time are also types of "evolution," as to the fact, that in all of these cases there is gradual change [Evolvement] over time, although the processes involved are quite different.

AWARENESS enables the individual to shift one’s PRESENCE between the 2 off consciousness states.

In other words the individual can decide in any given moment which consciousness state (in the moment or not in the moment) to reside in.The individual takes CONTROL.Therefore,AWARENESS enables ACTION.

So presence has awareness of the 2 types of consciousness states and 2 types of thought (inward/outward) also data (from 5 senses) also the resulting emotions that this information causes.
1 Reply
-1
Reply Sat 5 Mar, 2022 02:48 am
@Jasper10,
PRESENCE can be separated from CONSCIOUSNESS when the individual has sufficient AWARENESS to be able to take CONTROL of which CONSCIOUSNESS state is required to be EXPERIENCED.

This is why if the individual doesn’t take control or can’t take control due to UNAWARENESS then they remain a “prisoner of consciousness” because they can’t distinguish between PRESENCE and CONSCIOUSNESS types.
1 Reply
-1
Reply Sat 5 Mar, 2022 04:49 am
@Jasper10,
Quote:

PRESENCE can be separated from CONSCIOUSNESS when the individual has sufficient AWARENESS to be able to take CONTROL of which CONSCIOUSNESS state is required to be EXPERIENCED.

This is why if the individual doesn’t take control or can’t take control due to UNAWARENESS then they remain a “prisoner of consciousness” because they can’t distinguish between PRESENCE and CONSCIOUSNESS types.