Forums: News
Email this Topic • Print this Page
1
Reply Wed 5 Feb, 2003 04:52 pm
Forbes.com paints a bleak picture for the future of the shuttle, from a dollars-and-cents point of view:

Even before the tragic events of the Columbia this weekend, there was a growing chorus seeking the privatization of the shuttle business. At first glance, it would seem like a good idea: NASA could spare the American taxpayer the rising cost of maintaining the aging shuttle fleet. But even though a private operator could pick up the craft for a song, they would face the same high maintenance costs, a dwindling pool of suppliers and equipment that is unsuited to the new demands being placed on space missions.

While there will almost certainly be more shuttle flights--America has no other operational space vehicle ready to fly people into orbit--there won't be any new shuttles. The vehicles were conceived and designed during the 1970s. Building a new one based on propulsion and construction technologies that are 30 years old doesn't make any sense.

And NASA isn't really much in the shuttle business these days. Of its $15 billion annual budget, the agency spends only about $3.2 billion on the shuttle program. It spent $3.4 billion on unmanned space exploration programs like the Hubble Space Telescope.

When it does spend on the shuttles, it spends big: Estimates of the cost per flight range between $450 million and $500 million. A large part of that expenditure is on maintenance. In 1997, NASA spent $636 million, or about 20% of its $3.15 billion manned flight budget for that year, on "safety and performance upgrades," according to a 1998 General Accounting Office report. That was about $79.5 million for each of the eight shuttle missions NASA launched that year.

A 2002 study by Rand estimated that just maintaining the shuttles on the ground costs about $300 million annually. It said that the $1.1 billion NASA estimates it will need to continue upgrading the shuttles from 2003 to 2007 will not be enough to get the job done.

NASA has tried to get its costs more in line. Since 1996, it has handed over many of the functions related to running the shuttle program to a joint venture operated by Boeing and Lockheed-Martin called the United Space Alliance. That arrangement reduced the number of contracts on the shuttle program from 29 to one. Total headcount has been reduced to fewer than 2,000 from 2,700 in 1991.

Two years ago, NASA studied the idea of selling the shuttle fleet--with an estimated value of $2.5 billion per orbiter--to the private sector. Part of the reason for seeking privatization is the fact that so many NASA employees working on the program are nearing retirement age, taking with them valuable experience. It concluded that the program could be privatized as long as NASA kept a close working relationship with the entity taking over, and that doing so was crucial to the shuttle's safety.

But the 2002 Rand report concluded that the only way NASA would be able to sell the fleet and related assets would be "at highly deflated prices"--pennies on the dollar.

More here.
0 Replies
1
Reply Wed 5 Feb, 2003 05:11 pm
Well with so many of the NASA contractors in Texas and of course NASA I would think the President would make funding a priority. However, there is no state tax in Texas so employment of NASA personnel and contractors, and sub contractors in the state are not an issue. But you know the status is always a factor in Texas.
0 Replies
1
Reply Fri 7 Feb, 2003 05:59 pm
The article from Aviation Week: 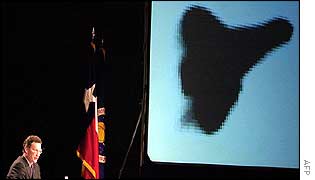