So your hate of Americans with different opinions and ideas unite you. That is worth repeating. Not good.
0 Replies
0
Reply Tue 4 Aug, 2020 11:07 am
@izzythepush,

wow, they took it down already.

BBC is reporting an explosion in Beirut with a large number of casualties.


I have a cousin who lives in Beirut. He was out walking his dog...and was knocked to the ground by the explosion. Lots of windows in his house were blown out. The explosion was a bit more severe than what the sparse news is indicating.
1 Reply
2
Reply Tue 4 Aug, 2020 12:53 pm
@Frank Apisa,
There’s speculation it may have been a warehouse containing explosives, that it was an accident.

There’s also claims it was a strike by Israel.

MSNBC Producer Quits Because It’s Liberal Fake News: “We are a Cancer and There is No Cure”

Remember the writer from the NYT?

“July 24th was my last day at MSNBC. I don’t know what I’m going to do next exactly but I simply couldn’t stay there anymore,” Ariana Pekary wrote on her personal website. “My colleagues are very smart people with good intentions. The problem is the job itself. It forces skilled journalists to make bad decisions on a daily basis.”

She then quoted an anonymous “successful and insightful TV veteran” who said: “We are a cancer and there is no cure… But if you could find a cure, it would change the world.”

As it is, this cancer stokes national division, even in the middle of a civil rights crisis. The model blocks diversity of thought and content because the networks have incentive to amplify fringe voices and events, at the expense of others… all because it pumps up the ratings.

This cancer risks human lives, even in the middle of a pandemic. The primary focus quickly became what Donald Trump was doing (poorly) to address the crisis, rather than the science itself. As new details have become available about antibodies, a vaccine, or how COVID actually spreads, producers still want to focus on the politics. Important facts or studies get buried.

This cancer risks our democracy, even in the middle of a presidential election. Any discussion about the election usually focuses on Donald Trump, not Joe Biden, a repeat offense from 2016 (Trump smothers out all other coverage). Also important is to ensure citizens can vote by mail this year, but I’ve watched that topic get ignored or “killed” numerous times.

Context and factual data are often considered too cumbersome for the audience.

Another source with no credibility. Maybe more fed up journalists will speak up.
https://www.lifenews.com/2020/08/04/msnbc-producer-quits-because-its-liberal-fake-news-we-are-a-cancer-and-there-is-no-cure/
0 Replies
-2
Reply Tue 4 Aug, 2020 03:58 pm 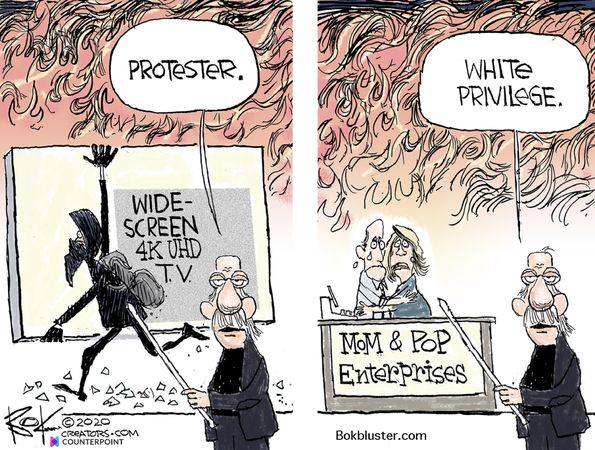 BEIRUT — A "colossal" explosion that rocked the port area of Lebanon's capital on Tuesday, killing dozens and injuring thousands, happened at a warehouse where tons of ammonium nitrate was being stored, the country's prime minister said.

"I will not rest until we find the person responsible for what happened, to hold him accountable and impose the most severe penalties," Prime Minister Hassan Diab said.

Diab said it was "unacceptable" that a shipment of ammonium nitrate estimated at 2,750 tons had been in warehouse for six years without "preventive measures" in place to protect it. The chemical compound, which is commercially available, is used widely in fertilizers and explosives.
1 Reply
1
Reply Tue 4 Aug, 2020 04:42 pm
@izzythepush, 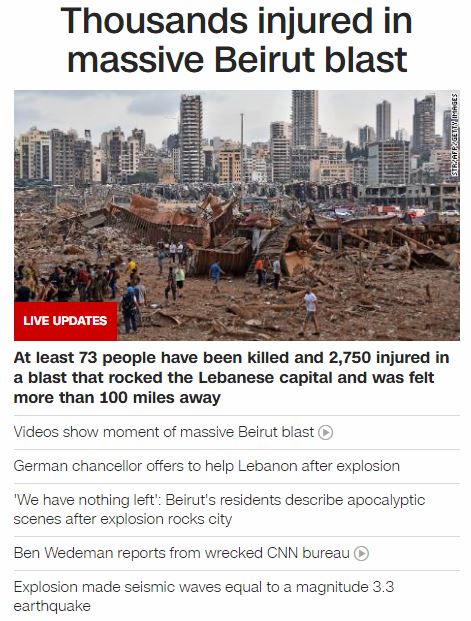 "The Oklahoma City bombing was a domestic terrorist truck bombing of the Alfred P. Murrah Federal Building[1] in Oklahoma City, Oklahoma, United States, on April 19, 1995. Perpetrated by American terrorists Timothy McVeigh and Terry Nichols, the bombing happened at 9:02 am and killed at least 168 people, including many children,[2] injured more than 680 others, and destroyed more than one third of the building, which had to be demolished.[3] The blast destroyed or damaged 324 other buildings within a 16-block radius, shattered glass in 258 nearby buildings, and destroyed or burned 86 cars,[4][5] causing an estimated $652 million worth of damage.[6] Local, state, federal, and worldwide agencies engaged in extensive rescue efforts in the wake of the bombing. They and the city received substantial donations from across the country. The Federal Emergency Management Agency (FEMA) activated 11 of its Urban Search and Rescue Task Forces, consisting of 665 rescue workers who assisted in rescue and recovery operations.[7][8] Until the September 11 attacks in 2001, the Oklahoma City bombing was the deadliest terrorist attack in the history of the United States. It remains the deadliest act of domestic terrorism in U.S. history. "

https://en.m.wikipedia.org/wiki/Oklahoma_City_bombing
1 Reply
1
Reply Tue 4 Aug, 2020 06:11 pm
@coldjoint,
You forgot the bull shyt panel.
0 Replies
2
Reply Tue 4 Aug, 2020 06:42 pm
@BillW,
McVeigh actually made ANFO, which was a crude mix of ammonium Nitrate and Fuel Oil (A.N. F.O.). I think he used Kron or diesel.
While NH4 NO3 can detonate due to poor ventilation in hot nvironments, it can be mmetastable in its crystalline bagged form(We had a massive explosion in Texas City US bck in 1947)> This explosion was in a 2200 T shipload of what became super heated NH4 NO3 that detonated in the bowels of a French freighter. It started as a fire in the hold and as they tried to fight the fire with water, it just got worse because the ammonium nitrate produces its own oxygen from it chemical structure and the triple bonded Nitrogen provided the explosive energy. The explosion was so great that it blew the ships 10 ft diameter propeller about a 1/4 mile inland and the ship anchor clear acros the city.
Are they sure this was an act of terror or just poor management of the warehouse load?

We still have some places where Am Nitrate is stored improperly but most of it today is stored as a superconcentrated liquid.

Are they sure this was an act of terror or just poor management of the warehouse load?

Looks like poor management to me.
0 Replies
2
Reply Tue 4 Aug, 2020 06:54 pm
@farmerman,
farmerman, I did know that McVeigh needed an accelerator and also about the Texas City explosion (though I didn't know or remember it was fertiliser). However, I was wondering how the Beirut explosion reached a point it could explode in the manner it did. Thanks for the explanation!I

BTW, I wasn't trying to infer this explosion was an act of terror. It is being said it was an act of corruption. I just presented it as an example of magnitude. The OKC bomb was powerful for what is a relative small about of material that isn't TNT.
1 Reply
3
Reply Tue 4 Aug, 2020 07:05 pm
@BillW,
have they actually found evidence that it was terror? The Texas city exploion was a major fire before it took off and the ships captain was trying to put it out by hosing the cargo down . This is one case where water will cause the fire to actually heat up and even glow as the AN gets to a critical temp.

I just wonder whether this could have been a really bad industrial accident.
A.N. is some mean **** because its not a high explosive , we use it in well shooting and rock mining because it produces energy that causes slow and strong vibrations within the rock or the drill hole , unlike high (C class)explosives which detonate with ultr fast speeds and expend their energy toward the open side of a drillhole.

1 Reply
2
Reply Tue 4 Aug, 2020 07:07 pm
@farmerman,
BTW, I wasn't trying to infer this explosion was an act of terror. It is being said it was an act of corruption. I just presented it as an example of magnitude. The OKC bomb was powerful for what is a relative small about of material that isn't TNT.

I will note here that our idiotic President noted it was an attack and then when he was asked about that comment; he noted, "it seems like it should be ...."
0 Replies
2
Reply Tue 4 Aug, 2020 09:21 pm
The West, Texas, ammonium nitrate explosion: A failure of regulation
Vytenis Babrauskas First Published September 5, 2017

On 17 April 2013, the West Fertilizer Company’s ammonium nitrate storage building exploded, killing 15 persons and injuring over 200. Numerous Federal and State agencies regulated the facility. But none of the agencies demonstrated a viable understanding of what is liable to cause accidental ammonium nitrate explosions, nor what is needed to prevent these. Specifically, none of them recognized the fact that ammonium nitrate fertilizer explosion accidents, when they occur, are inevitably the consequence of an uncontrolled fire and that such fires can be precluded by well-known fire safety measures. In fact, existing regulations have generally focused on everything but features needed to make such storage facilities incapable of sustaining an uncontrolled fire. Ammonium nitrate manufacturers, however, did have technical knowledge concerning safety and were aware of the ineffectiveness of governmental regulations. Espousing proper Product Stewardship principles by the manufacturers would have precluded selling dangerous chemicals to buyers who cannot safely store them.
0 Replies
1
Reply Tue 4 Aug, 2020 09:43 pm
State media in China report that the explosion has nothing to do with terrorism. Local authorities are to blame for having failed to safeguard the safety of ammonium nitrate that triggered the explosion , which could have been used by Muslim terrorists as explosives to attack America's allies in the Middle East
0 Replies