Forums: Politics, Trump, American Politics
Email this Topic • Print this Page
2
Wed 26 Jul, 2017 11:54 am
I'd done a superficial read of David Frum's July 4th column/article when it was published. The link is probably in this thread somewhere. In any case, I took some time to really read it last night and to follow a number of the links.

David's definitely his mother's son when it comes to research.

He's one of those conservatives who doesn't mesh well with America's Republican (or any) elite.
0 Replies
3
Wed 26 Jul, 2017 12:09 pm
conservative v Republican

how is this going to work out?

The Arizona Republican is betting his Senate seat on the political appeal of decency—but can that pay off in Trump’s America?

For Flake, one of the most jarring illustrations of Washington’s growing decency deficit came the night of the 2012 State of the Union address. He was seated next to Gabby Giffords, a friend and fellow member of Arizona’s congressional delegation. Giffords, a Democrat, had been shot in the head a year before and was still struggling to recover. Throughout the evening, Flake gently helped her up when she wanted to join the Democrats in a standing ovation—a gesture that meant he was often the only Republican on his feet during Obama’s applause lines. “I started getting texts and emails from people saying, ‘Why are you standing? Why are you standing?’ ”

Plenty of Republicans criticized Flake for his refusal to fall in line behind Trump. But perhaps his gravest sin against the gods of partisanship was a tweet he sent after Clinton tapped Senator Tim Kaine as her running mate: “Trying to count the ways I hate @timkaine. Drawing a blank. Congrats to a good man and a good friend.” Many Capitol Hill Republicans were apoplectic, Flake told me, recounting a surreal meeting in which one stood up and said, “If you can’t say anything mean, then don’t say anything at all!” The admonition, made with no discernible self-awareness, struck Flake as “a stark admission that we have really gone off the rails.”

As we spoke, Flake repeatedly stressed that he was not fretting over the coarsened political culture simply because he finds it distasteful, nor was he advocating bipartisanship for its own sake. A libertarian-minded Republican with a pristinely conservative voting record, he insists that he has not gone “squishy,” and that he harbors no desire to “sing ‘Kumbaya.’ ” But the decline of civility in politics, he said, has made it nearly impossible for government to function properly.

Apparently undeterred, Flake spent much of this year finishing a book in which he sharply contrasts Trump’s brand of conservatism with his own vision. Flake told me he wrote the book largely in secret because he knew his campaign consultants would try to talk him out of publishing it during his primary race. “You can always find an excuse to not stand up for your principles,” he said. “But if you don’t risk anything, it doesn’t matter as much.”

All of which raises a larger question about where Flake fits at this fraught moment. He clearly sees himself as engaged in a fight for the soul of his party—beating back the barbarian populists at the gate, standing up for decency and old-fashioned conservative values. But the political battlefield has never looked more uninviting to a warrior of Flake’s kind.

On the morning of June 14, a 66-year-old man armed with a rifle opened fire on a park in Alexandria, Virginia, where Flake was practicing with his fellow GOP legislators for the upcoming Congressional Baseball Game. For several harrowing minutes, police tried to subdue the shooter, and lawmakers scrambled for cover. By the time it was over, five people had been shot. Flake rushed to the side of the Louisiana congressman Steve Scalise, who lay soaked in blood, and helped apply pressure to his wound as they waited for medics to arrive. He then called Scalise’s wife, so that she wouldn’t find out about the shooting on TV.

He seemed to view the episode as a grim validation of his worst fears about the country. “The deterioration of political discourse in general aids this,” he said. “When we ascribe motives to our opponents, that they are evil, then we’ve almost given license to extreme behavior.”

About a mile from where we sat, thousands of people were streaming into Nationals Park to take in the Congressional Baseball Game that evening. Ticket sales had spiked in the day since the shooting, and people on TV were asking whether this moment of patriotic unity might serve as a healing balm for a nation sick with rage. Flake wanted to believe that, but he remembered better than most the last time an attack on a lawmaker was supposed to usher in a new era of civility.

“This tends not to last,” he said. Still, he insisted he wasn’t giving up hope. “I don’t know how much further you can go this way before people recoil and say, ‘Let’s change it.’ ”

Don't delude yourself. I doubt that anyone hates you;

I despise the creepy little nomark.

Set and I are very sorry to hear that. Please convey our condolences to Saab's family.

Me too, beth. She and I had just begun communicating over the last few months and were growing quite fond of each other. A smart and funny lady. Her passing was very quick and unexpected, her daughter told me. And I will pass on your condolences.
0 Replies
2
Wed 26 Jul, 2017 12:33 pm
@Walter Hinteler,
I will, Walter.
2 Replies
-4
Wed 26 Jul, 2017 12:36 pm
@hightor,
hightor wrote:

A Trump Tower of Absolute Folly

Donald Trump’s campaign against his attorney general, Jeff Sessions, in which he is seemingly attempting to insult and humiliate and tweet-shame Sessions into resignation, is an insanely stupid exercise. It is a multitiered tower of political idiocy, a sublime monument to the moronic, a gaudy, gleaming, Ozymandian folly that leaves many of the president’s prior efforts in its shade.

I haven't read this garbage article, and I don't plan to. If, as I assume they are, they are pointing out that Trump shouldn't be publicly dumping on Sessions, or even trying to quietly replace him, then I agree. However I can read all about that on a legitimate news webpage.

Just look this highly biased crap, eh, Hi? "insanely stupid," "gaudy folly," "idiocy." This is what YOU call "news," while trying to pretend that the cheese-eaters don't badly insult Trump with virtually every sentence they utter. They're trolling 24/7. And it is ONLY such lame-ass trolling that you, Blather, and the rest want to aggressively and relentlessly post here, all while claiming to find trolls disgusting. It clear depends ONLY on whose ox is being gored, for you and your fellow-travelling cheese-eaters.

To you, that's objective truth, and anyone who disputes is a "monumental idiot." And, guess what? Your post got a lot of thumbs up, too, so that PROVES it's a fair, brilliant post, eh?

As is typical, you post excerpts very selectively. You only post negative conclusions and not a single argument or fact to support them. Like the MSN you only care about conveying conclusions, if they're negative, that is.

A Trump Tower of Absolute Folly

Donald Trump’s campaign against his attorney general, Jeff Sessions, in which he is seemingly attempting to insult and humiliate and tweet-shame Sessions into resignation, is an insanely stupid exercise. It is a multitiered tower of political idiocy, a sublime monument to the moronic, a gaudy, gleaming, Ozymandian folly that leaves many of the president’s prior efforts in its shade.

There's a big difference between a rationally presented opinion which is articulated in a calm, factually supported manner, and the wild-eyed ravings of some muslim getting ready to behead a journalist on youtube.

All major media have "opinion" sections, but not all are equally "opinionated" with hate-filled ranting, eh?

Out of the millions of words published recently about Trump, Sessions, etc., Hi scours them until he can find an excerpt that is short on facts and long on rank insults. Who knows how long that might have taken him, but his efforts were rewarded. He got a negative response from a 'trump supporter." I'm sure he's quite happy with himself.
0 Replies
3
Wed 26 Jul, 2017 01:03 pm
@blatham,
How sad, she was an interesting woman, always enjoyed hearing her views. We also exchanged PM's, I'm going to miss her.....please tell her daughter that she had many friends on A2K...we will all miss her.
1 Reply
5
Wed 26 Jul, 2017 01:28 pm
Quote: 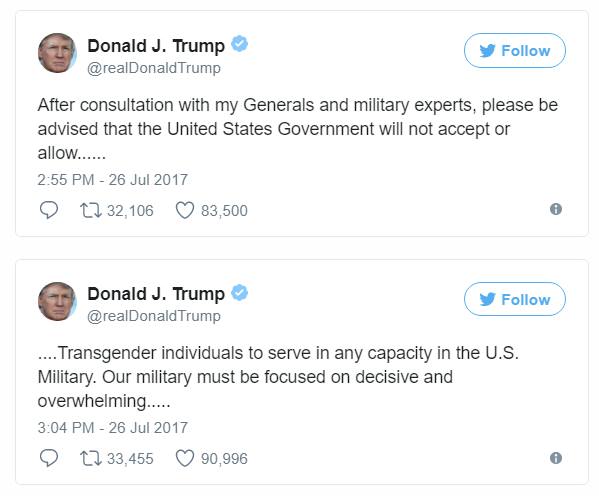 Might well be that someone here can answer this: what about those existing transgender members of the military, will they be allowed to continue to serve or do they get fired now?
3 Replies
Below viewing threshold (view)
-5
Wed 26 Jul, 2017 01:32 pm
@Walter Hinteler,
Walter Hinteler wrote:

Might well be that someone here can answer this: what about those existing transgender members of the military, will they be allowed to continue to serve or do they get fired now?

"After consultation with Generals and military experts," eh? Aint these the same fascists who are blatantly prejudiced against citizens convicted of multiple felonies? Or even just one lonesome felony conviction?

Figures, sho nuff. Who would expect them to give some poor, self-deluded drama queen a fair shake? They thrive on hate. They only want to kill innocent babies.
0 Replies
3
Wed 26 Jul, 2017 02:03 pm
@Walter Hinteler,
Trump is not a rational man. Apparently, he thinks he bought another business and can run the USA like one of his casino's. The Pentagon was caught flat-footed, they didn't know.......trump thrives on chaos, he can't last more than 15 minutes without blurting out another totally disruptive remark. The notion that there are 3 branches of government is an unnatural state of affairs for Trump. It doesn't fit his fantasy of what a President 'is', he mistakenly believes he has unlimited powers.....and he CAN influence many things but like any other greedy man he can never be satisfied. There will never be 'enough' of anything to sate his appetites. Not enough lousy food, not enough money not enough women and there sure as hell will never be enough praise to even quiet him down for a couple freaking days.

To answer your question, I don't know what will happen other than to give disturbed people more tacit approval to persecute transgendered people. Divide, divide, divide and keep people in a constant state of anxiety. He doesn't understand the difference between fear and respect...He thinks they are the same thing.