.. typically Muslims are commanded to kill the infidels and it is Ramadan... 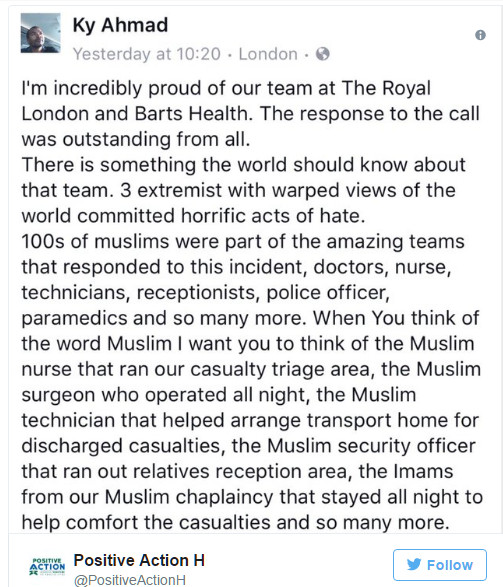 I did want to clarify my earlier response about Christianity, though. I wasn't excusing what I thought might have been a real tweet or blaming the christian faith, just pointing out that there are some christians who are able to manifest a profound sense of forgiveness and the (fake) sentiment expressed in the fake tweet might be seen it that context. Glad it's irrelevant in this case.
1 Reply
-1
Mon 5 Jun, 2017 10:29 am
@giujohn,
Quote:

but typically Muslims are commanded to kill the infidels and it is Ramadan.

Any person with half a brain or even less ought to be able to see thru this incredible piece of the rankest of US propaganda. If it had any truth to it, the slightest bit of truth to it, there would be hourly attacks on "infidels" [jesus murphy how you people slurp up the propaganda!] around the world.
0 Replies
0
Mon 5 Jun, 2017 10:32 am
@Walter Hinteler,
Of course there are millions and millions of decent Muslims throughout the world and it truly is unfortunate for them that they get tarred by the brush deserved by a significant minority that are horrendous human beings.

The same is true as respects any group that can be seen to contain a minority of extremists, much like American conservatives.

Folks who object to generalizing about Muslims because of the actions of a relative few should keep this in mind when they launch into the same behavior relative to any group of people for whom they don't feel an affinity.
2 Replies
0
Mon 5 Jun, 2017 10:33 am
@ossobucotemp,
Thanks!

I did want to clarify my earlier response about Christianity, though. I wasn't excusing what I thought might have been a real tweet or blaming the christian faith, just pointing out that there are some christians who are able to manifest a profound sense of forgiveness and the (fake) sentiment expressed in the fake tweet might be seen it that context. Glad it's irrelevant in this case.

In response to Mr Trump's attack, a spokesman for the mayor said on Saturday that Mr Khan "has more important things to do than respond to Donald Trump's ill-informed tweet that deliberately takes out of context" the mayor's remarks.
Mr Trump's attacks on Mr Khan have drawn condemnation from both sides of the Atlantic.
His critics have accused him of being insensitive and twisting the mayor's words.
Politicians in the UK on Monday called on the prime minister to withdraw the invitation for Mr Trump's state visit later this year.
The leader of the Liberal Democrats, Tim Farron, said: "This is a man insulting our national values at a time of introspection and mourning."
Over the weekend, Prime Minister Theresa May refused to criticise Mr Trump, simply saying that Mr Khan was doing a "good job".
"Try to imagine the UK prime minister attacking the Mayor of NYC the day after 9/11," said European Parliament cabinet member Simon O'Connor.
The US Conference of Mayors, representing more than 1,400 American cities, backed Mr Khan.
"He has risen above this crisis of death and destruction, as mayors continue to do, to alleviate fear, to bring comfort to his people of London", the mayors wrote in a statement on Sunday.

After Mr Trump as a presidential candidate announced his plan, Mr Khan told the BBC he hoped he would "lose badly", adding that he was a "buffoon".
He also called Mr Trump's views on Islam "ignorant", leading the New York billionaire to challenge him to an IQ test.

Trump's tweet was really stupid (as most of them are) but I don't know that he's ever picked a fight with anyone who didn't throw the first punch.
3 Replies
3
Mon 5 Jun, 2017 11:47 am
@Finn dAbuzz,
Khan and the President have a history of clashing and in the past the Mayor criticised many of Trump’s campaign tactics.
1 Reply
-1
Mon 5 Jun, 2017 12:04 pm
@Walter Hinteler,
That's totally missing the point. There certainly are good people who happen to be Muslims and, in fact, they may even constitute a majority of Muslims; that is absolutely irrelevant and you know it. It is the lunatics who are interpreting that religion correctly, that is, who are interpreting that religion as it is actually written and as 1400 years of history proclaim it to be, correctly.

Muhammed's resume is basically that of a bandit chieftain or warlord. The religion was deliberately cobbled together in such a way as to facilitate the control of increasingly large confederations of bandit tribes. It glorifies the kinds of **** that bandits do.

Well hell Walt he could be a druid for all I know (wasn't it just arbor day last month) but typically Muslims are commanded to kill the infidels and it is Ramadan...and us italians usually kill for money.

John Robert Neumann Jr, 45. Neumann - "a disgruntled employee" -
was also involved in a workplace incident in June 2014. He had a minor criminal history that includes marijuana possession, DUI and a misdemeanor battery charge.

He was armed with a gun and a knife, but didn't use the latter.
Nothing has been said until now (14:20 local time) about his religion and if/what he shouted.
1 Reply
12
Mon 5 Jun, 2017 12:33 pm
A woman in a hot air balloon realized she was lost. She lowered her altitude and spotted a man in a boat below. She shouted to him:
"Excuse me, can you help me? I promised a friend I would meet him an hour ago, but I don't know where I am."

The man consulted his portable GPS and replied, "You're in a hot air balloon, approximately 30 feet above ground elevation of 2,346 feet above sea level. You are at 31 degrees, 14.97 minutes north latitude and 100 degrees, 49.09 minutes west longitude.

She rolled her eyes and said, "You must be an Obama Democrat.
"I am," replied the man. "How did you know?"

"Well," answered the balloonist, "everything you told me is technically correct. But I have no idea what to do with your information, and I'm still lost. Frankly, you've not been much help to me."

The man smiled and responded, "You must be a Republican."
"I am," replied the balloonist. "How did you know?"

"Well," said the man, "you don't know where you are -- or where you are going. You've risen to where you are , due to a large quantity of hot air. You made a promise you have no idea how to keep, and you expect me to solve your problem. You're in exactly the same position you were in before we met, but somehow, now it's my fault."
2 Replies
2
Mon 5 Jun, 2017 12:47 pm
Quote:

After London Attack, Theresa May Finds Her Record on Terrorism Under Scrutiny

LONDON — After the briefest of pauses in electioneering, Prime Minister Theresa May of Britain found her record on security and terrorism under scrutiny on Monday, in the aftermath of a deadly attack in London over the weekend — the third serious terrorist episode in the country in three months.

Before she replaced David Cameron as prime minister last year, Mrs. May was responsible for security during a six-year tenure as home secretary, and opposition politicians are highlighting reductions in the number of police officers, including those who are armed, during her tenure.

“The commissioner of the Metropolitan Police has said that the Met is well resourced, and they are; and that they have very powerful counterterrorism capabilities, and they do,” Mrs. May said at a news conference on Monday. “We have protected counterterrorism policing budgets. We have also provided funding for an increase in the number of armed police officers.”

On the US front, Trump will not block Comey testifying.

It wasn't directed at the mayor.
1 Reply
4
Mon 5 Jun, 2017 01:34 pm
@izzythepush,
gotta love that #45's tweets are likely (per ACLU report) going to be used as testimony against the attempted bans


I heard one of 45's people this morning on CNN trying to split hairs and say that 45's tweets were not actually presidential statements and should not be considered as the president stating his policies, but that it was simply "social media" and therefore just a way for the president to express himself to the American people. It was reminiscent of the time they were trying to float the idea that we should take 45 "seriously", but not "literally". Such horseshit.
0 Replies