Forums: English, English Language, English As A Second Language
Email this Topic • Print this Page
Reply Mon 15 Aug, 2016 06:57 am
Would someone please explain me what the word "jug-handled" means in the following context?
A baseball fan tells his mate about a ball player, "Yanks and Cleveland. Yeah, we got this kid, Modjelewski, in there. Ooh, he's a real bull, this kid. You know - Phoom! Real jug-handled." (source: 12 angry men, movie).
For all I know, "jug-handled" stands for "not properly or fairly proportioned, one-sided" but what has that to do with it?
Type: Question • Score: 1 • Views: 3,522 • Replies: 23
0
Reply Mon 15 Aug, 2016 08:43 am
@Razmysl,
I searched the script of 12 angry men, and jug or jug handled wasn't there. The work has had several adaptations, so maybe that was the answer. From the context of your sentence, I gather the player, Modjelewski, was a pitcher. Most successful pitchers throw very hard, and as a result they tend to be tall with very long arms. The jug-handled with Modjelewski probably means he had extremely long arms, so when he stands with his hands on his hips, (which baseball players are likely to do between pitches), his elbows stick way way out and his whole figure resembles a jug with large handles sticking out on both sides.
1 Reply
4
Reply Mon 15 Aug, 2016 12:56 pm
It's in the movie script. It's actually "a real jug handle". A "jug handle" is an old baseball expression for a curve ball with a sharp break or broad arc that bends like the handle of a jug. . A famous player, John Dewey Morrison, was known as "Jug Handle Johnny" because of his skill at producing this type of curve ball.

1 Reply
0
Reply Tue 16 Aug, 2016 08:01 am
@Blickers,
Many thanks, Blickers! A fragment of the movie with the sentence is here: https://www.youtube.com/watch?v=1OY8Okl__a8. Probably, the teller refers to Dick Modzelewski, a real person, but Wikipedia has not this baseball player as "real jug-handled" or "a real jug handle". Maybe a meaning of the phrase is bound up in some way with a gesture of the narrator?

1 Reply
1
Reply Tue 16 Aug, 2016 09:47 am
@Razmysl,
Now that I've seen this clip, (or re-seen this clip, I saw the movie on TV decades ago), I realize that the meaning is tied up with his gesture. Modzelewski was clearly a pitcher, who throws the ball. All pitchers have a variety of styles of pitch, foremost a fastball, which is simply thrown too fast for the batter to hit, and the curveball, which goes straight until the last moment before it reaches the batter, then curves down and to the side. There is another pitch called the screwball, which curves to the opposite side from the normal curveball, which very few pitchers can master. By the way, these pitches actually do curve, it has been measured scientifically, it is not an optical illusion as some have held in the past.

Clearly the impatient juror was referring to Modzelewski's curve ball or screwball as indicated by his gesture. He meant that Modzelewski threw a very good curveball or screwball, or both, and was very hard for the batters to hit. By the way, I should mention the pitcher's job is to prevent the opposing batters from hitting his pitches, at least not very much.
1 Reply
0
Reply Wed 17 Aug, 2016 07:17 am
@Blickers,
Thanks a lot, Blickers, for your great elucidation. But why does the juror name Modzelewski "jug-handled" or "jug handle" on this basis? What does he say in reality, "real jug-handled" or "a real jug handle"?

1 Reply
0
Reply Wed 17 Aug, 2016 07:25 am
@contrex,
contrex, I was very impressed with your post. It's terse, exhaustive, comprehensible.
Many thanks.
Does the video I provided here change your opinion?

0 Replies
1
Reply Wed 17 Aug, 2016 07:30 am
1 Reply
1
Reply Wed 17 Aug, 2016 09:54 pm
@Razmysl,
I probably should mention that when you watch baseball on TV and the pitcher throws a really curve ball, the trajectory of the ball can seem to have a such a curve as to resemble a jug handle. The ball moves in a rounded downward curve to its destination, instead of straight like a fastball.

The curving motion of the speaker made it clear what he was talking about, (if you knew baseball).
1 Reply
1
Reply Thu 18 Aug, 2016 09:13 am
@Blickers,
Thanks, Blickers, it is clear. Could you please tell me another thing?
It is mentioned "real jug-handled" in the subtitles to the movie. contrex says that it is "a real jug handle". What does the juror say in fact, "real jug-handled" or "a real jug handle"?

0 Replies
1
Reply Thu 18 Aug, 2016 11:33 am
From what I can gather, it sounds more like "jug-handler". Which would fit with the idea of Modzelewski being able to throw "jug handles", ie, curve or screw balls that describe a very curved arc through the air on the way to the batter.

Incidentally, I watched a lot of baseball, but not in the 1950s, and I never heard the word "jug handle" to describe a curve or screw ball. But sports parlance changes over time, or it might be something this wisecracking sportsfan character in the movie made up himself to get creative.

By the way, I recognized the actor playing that character, his name is Jack Warden. I saw more of him in later decades, for a non leading man he had a lot of work, he was on movies, TV, everywhere. He always played the kind of blunt, wisecracking character he did in that movie clip, even several decades later.
0 Replies
0
Reply Thu 18 Aug, 2016 12:04 pm
Hate to bring more possibilities into this, but this movie was made in the late fifties and right about that time, with new road construction going on all over America, the curved "jug handle" intersection was introduced, which entails a curved roadway as below. The first mentions of it was during the late fifties, right when this movie was made. So that is one possibility of the meaning.

Finally, one more possibility is a certain image that Americans had in mid 20th century of middle eastern people, who were considered exotic back then. One of the most popular images you saw or heard about was the Arab or Indian snake charmer who played a tune on his flute while the poison snake emerged from a jug, slithering out and moving back and forth with the tune. If you see the actor's hand motion going back and forth, it is very suggestive of that movement. Fact is, I am kind of inclined to think that might well be what the character is referring to-this movie is just at the beginning of the civil rights movement and the majority of people at the time, when confronted with different cultures, is to think in terms of stereotypes to make fun of them.
0 Replies
1
Reply Thu 18 Aug, 2016 12:21 pm
It's not an ethnic slur or a freeway junction. It is as I previously explained.

7TH JUROR [to the 2ND JUROR]: This better be fast. I got tickets to a ball game tonight. Yankees—Cleveland. We got this new kid pitching, Modjelewski, or whatever his name is. He’s a bull, this kid. [He shoots his hand forward and out to indicate the path of a curve ball.] Shhooooom. A real jug handle. There is no reaction at all from the 2ND JUROR

PS: For a ballplayer who was famous, I don't believe I've ever heard of Jug Handle Johnny Morrison. I do believe that the curve ball was invented by Candy Cummings back around 1880 or so. Oh well.
1 Reply
1
Reply Thu 18 Aug, 2016 01:18 pm
I am not knowledgeable about baseball, I just did a quick Google and found pages about Jug Handle Johnny Morrison. I have a feeling that a 'jug handle' is just one kind of curve ball.
1 Reply
1
Reply Sun 21 Aug, 2016 03:39 am
@contrex,
contrex wrote:

I am not knowledgeable about baseball,

But you know a lot about jugs. 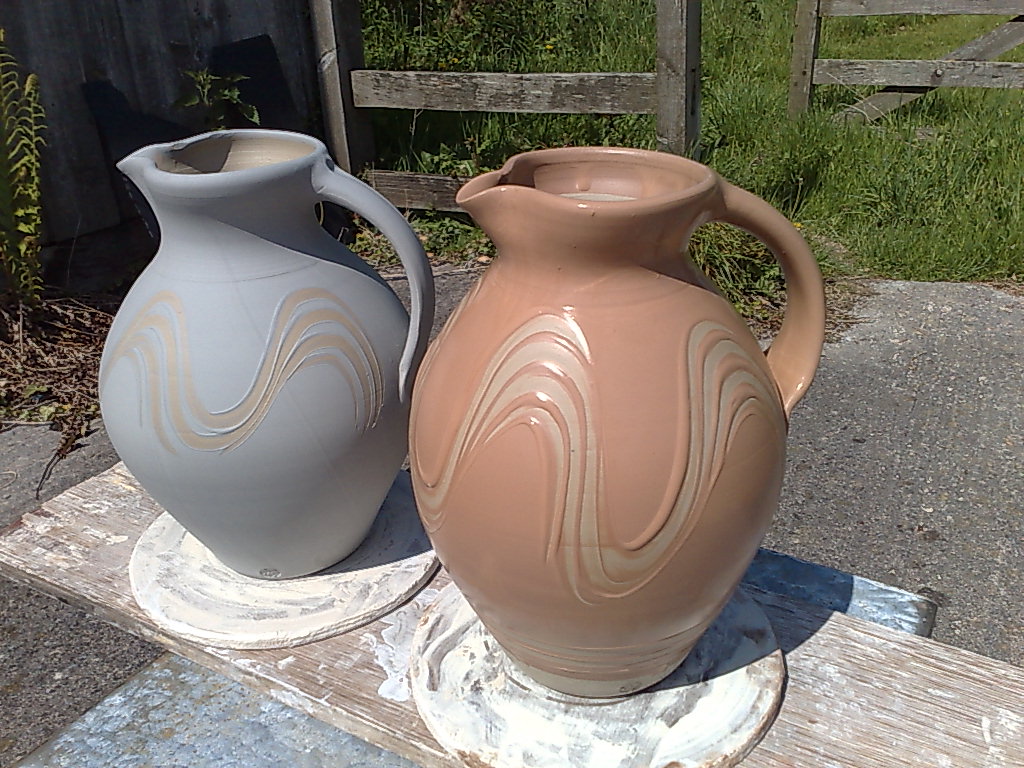 izzythepush, I guess, you are an expert in pottery.

They are a lovely pair of jugs though, but I'm not responsible.
0 Replies