Forums: Movies, Films, Video, Dvd, Dvds
Email this Topic • Print this Page
1
Reply Tue 30 Mar, 2010 05:14 am
Just watched The Lives of Others for the second time, this time on DVD. I only chose it again because I couldn't find a 4th DVD I was really interested in hiring from my video shop. But it was just as riveting & moving this time around. Totally bowled over again. What a brilliant film!

Have you watched The Cove yet?

(serious question ... ) If one is squeamish about viewing cruel or violent treatment of animals, is it best avoided?

I understand & support the purpose of the film, just personally find some things very difficult to watch.
1 Reply
1
Reply Tue 30 Mar, 2010 05:34 pm
@msolga,
It's difficult to watch in small parts, I won't deny. One reviewer on IMDB said it brought him to tears (me, too), but it's very informative and well put together. There's one really graphic scene...yeah, hard to watch. It will evoke all kinds of emotions, actually -- gratitude that someone is bringing attention to the matter; anger that people would be so callous; sadness for the obvious reasons.

I can tell you that after watching it, I will never patronize places like SeaWorld or other businesses that take animals from the wild to be placed in captivity for exploitation. I don't think most people would.

1 Reply
1
Reply Tue 30 Mar, 2010 05:38 pm
@Irishk,
Thanks for your response, Irishk.
I'll think seriously about whether to see it or not. Though I have no doubt, as I said, that I'd whole-heartedly support the purpose of the film.

In this comedy based on real events, a small sheepherding village in Australia is thrust into the spotlight when NASA employs its massive satellite radio dish to serve as a backup transmitter for the 1969 Apollo 11 moon mission. But when a change in the spacecraft's schedule puts the primary dish out of range, it's up to the Aussies to ensure that the history-making mission is broadcast to the masses. Sam Neill and Patrick Warburton star.

We both found it entertaining and genuinely funny. It has a PG-13 rating for some language, but IMO it's a movie to be enjoyed by the whole family. I highly recommend it (it's from the same crew that made "The Castle"). 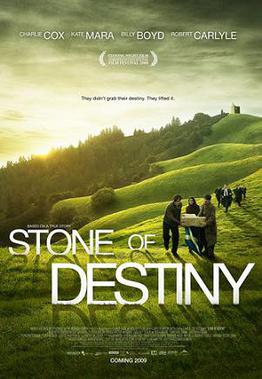 The film is based on real events and tells the story of the rightful return of the Stone of Scone on Christmas Day, 1950. The stone, supposedly the pillow stone used by Jacob in the Bible and the stone over which Scottish Kings were traditionally crowned at Scone in Perthshire, was seized by the English King Edward I in 1296 and placed under the throne at Westminster Abbey in London. In 1950, a nationalist plot succeeded in removing it from Westminster Abbey and returning it to Scotland where it was placed symbolically at Arbroath Abbey, the site of the signing of the Declaration of Arbroath and an important site in the Scottish nationalist cause.

Other cast members include Peter Mullan, Rab Affleck, Bryan Lowe, Ciaron Kelly, and Stephen McCole. Filming began in June 2007 in locations including Westminster Abbey, the University of Glasgow, Ayr and Paisley including Film City studio and Arbroath Abbey.
0 Replies
1
Reply Sun 18 Apr, 2010 07:03 am
Watched a very unusual film on video yesterday: Love In Thoughts. (Yes, I know, not exactly a wonderful title, but anyway ..) Set in the late 1920s in Germany, the film covers a weekend that ends in tragedy as a result of a suicide pact between two of the main characters. If I explained the plot in detail, it would probably sound far-fetched, not exactly believable, but somehow the director ( Achim von Borriespulls) manages to create a really convincing, atmosphere ... quite fascinating to watch, really. The main characters were well cast & it was quite beautifully filmed. The synopsis below (from the only review I could find) is rather blaze & doesn't really do the film credit.:

Love in Thoughts is a taut and exciting thriller that deserves a much bigger audience than it will ever receive.

The story is based on an incident in 1927 (known commonly as the Steglitz Student tragedy), unknown in the States but the equivalent of Leopold and Loeb for Germany, a trial which had been decided in Illinois only three years prior.

The setup is familiar: Two college kids, Paul (Daniel Brühl) and Günther (August Diehl) spend a break in the country, inexplicably unsupervised by anyone at all responsible. While they're best friends and have a similar outlook on life, Paul and Günther are quite opposites: Paul's a working-class wannabe poet, and Günther is a disinterested rich kid with no future plans beyond what he's drinking that evening. Complicating the friendship is Paul's unrequited love for Günther's sister Hilde (Anna Maria Mühe, who looks like Anne Heche if you compressed her head by a third but left her eyes normal size), plus a tangle of other relationships that no one wants to take seriously but ends up with hurt feelings all around.

All this talk of love leads to the film's ultimate point, a suicide pact between Günther and Paul, in which they promise to kill themselves when they no longer love.....

0 Replies
1
Reply Tue 8 Jun, 2010 06:04 am
Slowly working my way through a batch of old movies on VHS, bought for a song from my video shop, which was offloading them. Tonight: Almost Famous, a nostalgic look at the 70s rock scene, through the eyes of a (then) 15 year old Cameron Crowe, on tour with a band trying to make the big time .... to write an article for Rolling Stone. Not quite a warts & all depiction, but I enjoyed it.:

http://au.rottentomatoes.com/m/almost_famous/
1 Reply
1
Reply Tue 8 Jun, 2010 06:55 am
@msolga,
The plane scene from Almost Famous ... where the band & hangers-on (thinking they are about to die, as the flight becomes more & more rugged) make their confessions. Quite funny.:

0 Replies
1
Reply Wed 9 Jun, 2010 08:28 am
Another old VHS tonight. A West German film called The Nasty Girl. About a young woman who gets far more than she bargained for when she investigates the history of her (Bavarian) home town during the Third Reich. Not at all grim, as I'd imagined it would be, in fact quite a bit of humour & fun along with the serious moments. Engrossing. :

Set in London in the 1980's, the characters are seedy crooks and probably not worthy of anyone's sympathy, but I could not help but get caught up in it, wondering why things were going so wrong for him, what would happen next, how would he get out of it, etc.

I am a huge fan of Hoskins and in hindsight (it's quite a long while since I saw it) he is probably the reason I did get so involved in it.

Here is part of a review on the IMDB website -

A shady character, Colin (Paul Freeman -Raiders of the Lost Ark), carrying a suitcase of money pockets a couple handfuls of cash before making the delivery. In a country farmhouse the three men dividing the money in the case are attacked by gunmen. Outside a pub Colin's accomplices are abducted and killed....

The leading gangster in the London underworld (Harold Shand - Bob Hoskins in his breakout movie role) is forming an alliance with a group of rich, shady Americans to fund the very profitable London docklands development of the 1980s.

On Good Friday while Shand's mother attends church, her waiting driver is killed when her car explodes. The news of this is an outrage to Shand who is shocked at the declining code of conduct among the underworld. This decline parallels the decline of his empire throughout the film. He is given 24 hours to fix the situation or the Americans will walk away from the deal...

One of my favourites!
0 Replies
1
Reply Thu 11 Nov, 2010 07:14 am
I'm throwing in a television series in for good measure. An old one, I know. And everyone's seen it, I know ...
But I am hopelessly sucked in. I can't stop watching Six Feet Under.
I have watch 14 episodes in the past week & have a fresh stack of series 2 episodes all lined up to go ... (I hope this doesn't become a problem.

Apart from that, recently (catching up on films I wanted to see, but didn't) I watched The White feather.
Brilliant German film.
So there was no actual resolution to the plot.
Not to worry. It was absolutely mesmerizing viewing.

Tonight a friend & I watched Beyond The Sea.
I didn't know quite what to expect, but it was really interesting.
(Kevin Spacey was excellent!)

And there has been more.
But later ....
0 Replies
2
Reply Thu 11 Nov, 2010 07:23 am
Haven't been reading along, so don't know if these have already been suggested. But for a really entertaining movie - pretty much family fare and fun, I liked Whip It! with Ellen Page as a teen who falls in love with being in Roller Derby (Drew Barrymore's directing debut).

I just saw Crazy Heart with Jeff Bridges last night. I generally tire quickly of all the hoopla made over how great an actor is, or how iconic, or whatever, but I totally get why Bridges got an Oscar for this part. He is 100% believable as "Bad Blake" - the burnt out alcoholic country singer, and Maggie Gyllenhaal is also good.
1 Reply
1
Reply Thu 11 Nov, 2010 07:40 am
@snood,
Quote:

I just saw Crazy Heart with Jeff Bridges last night. I generally tire quickly of all the hoopla made over how great an actor is, or how iconic, or whatever, but I totally get why Bridges got an Oscar for this part. He is 100% believable as "Bad Blake" - the burnt out alcoholic country singer, and Maggie Gyllenhaal is also good.

Thanks for reminding me about Crazy Heart, snood.
I've just recalled reading excellent reviews, quite some time ago ... but somehow it never crossed my path. I must check out my local video shop to see if they have it.
I have a lot of respect for Jeff Bridges as an actor. Cutter’s Way (from ages ago) remains one of my favourite films.
0 Replies
2
Reply Thu 11 Nov, 2010 08:00 am
Oh I forgot to mention that I finally caught up with Julia and Julia.
Which was a lot of fun.
Meryl Streep was terrific! So funny.
And the cooking!
1 Reply