Authorities believe most of property was stolen 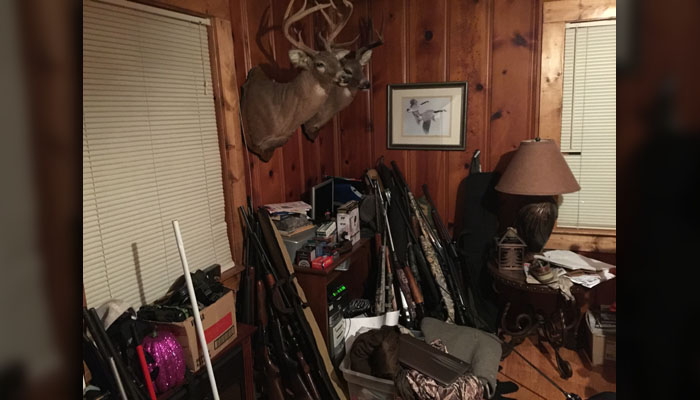 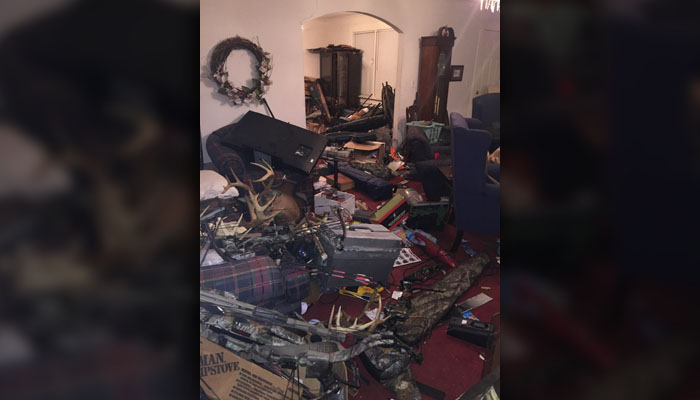 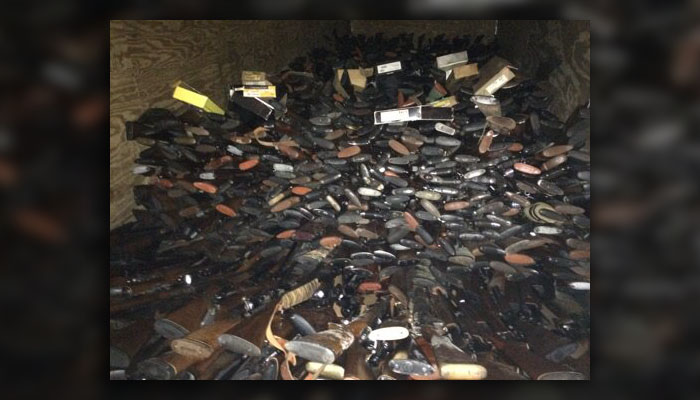 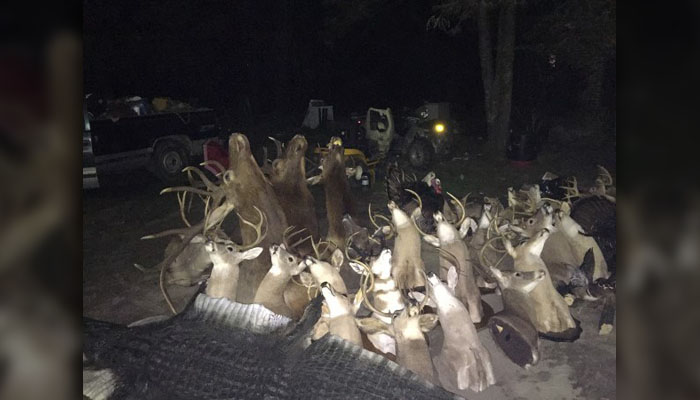 In his 30 years of law enforcement, about the largest illegal stash of weapons Chesterfield County, S.C., Sheriff Jay Brooks ever investigated was 50 guns.

“And that was considered an arsenal,” Brooks said.

Saturday, his deputies arrested 51-year-old Brent Nicholson of Pageland after they found thousands – their best estimate is 7,000 to 10,000 – of handguns and rifles stacked at his house and in a nearby storage building. They found hundreds more at a liquor store Nicholson runs with his father and at his parents’ home, Brooks said.

“There were so many guns we quit counting after a while,” the sheriff said.

Deputies also found hunting crossbows; ammunition; taxidermed deer, elk and alligator heads; hunting mounts; tools; air compressors and more than 500 chainsaws – most of it, Brooks said, stolen. There was “so much stuff” that by 3 p.m. Saturday authorities had filled four 40-foot tractor-trailers and taken it to an armory near the sheriff’s office in Chesterfield where the thousands of items will be processed.

Nicholson, picked up by police in Monroe about 1:30 p.m. Saturday, arrived in Chesterfield County about an hour later and was in the county jail charged with possession of stolen property, Brooks said. “There’s much more to come,” he added.

He said others may be arrested in the matter in Pageland, a town of 2,800 about 15 miles south of Monroe otherwise known for its yearly watermelon festival.

Monday, the South Carolina Law Enforcement Division plans to send 20 agents to help process the stash and determine what has been stolen.

The discovery was made when deputies arrived at Nicholson’s house Friday about 3 p.m. to serve a subpoena for an unrelated matter, Brooks said.

They found chainsaws and a welder “in plain sight” on the front lawn that had been reported stolen, he said. “They went to a judge and got a search warrant and went back to the house and found literally thousands of guns,” Brooks said. “They secured the scene and called everybody in. We’ve been there ever since and we’ll probably be working on this into next week.

“This investigation is far from over.”

The sheriff said many of the guns looked like they’d been stored for years.

The sheriff said Nicholson may have stolen some of the merchandise, but he likely bought most of it from other thieves. “They steal this stuff from homes, or hunting lodges or cabins, and sell it for $100 a pistol,” he said.

Brooks said Nicholson has a “lengthy record” and has lived in Pageland most his life. He was living there when Brooks arrived in Chesterfield County 30 years ago.

Saturday, sheriffs from neighboring counties – including Union and Anson – were invited to Chesterfield to get a look at the stash. Many of the items, Brooks said, appear to have been stolen from North Carolina homes and hunting cabins. 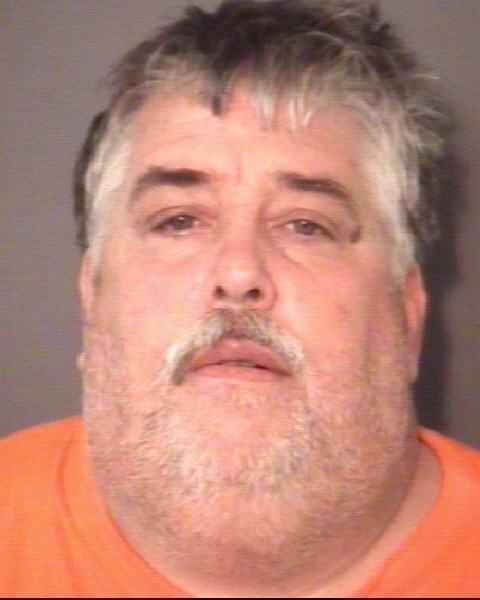 Deputies estimate that they've seized between 7,000 and 10,000 stolen guns from a house and warehouse near Pageland. Brent Nicholson was arrested in connection to the stolen goods.

Chesterfield County Sheriff Jay Brooks says the seized guns, ammunition, and hundreds of other items were all found on a single property off of Highway 9 outside of Pageland city limits.

Nicholson was arrested and charged with trafficking opium and heroin, earlier in the week in Union County. Deputies reportedly went to serve him with a subpoena Friday and noticed what appeared to be stolen goods in his front yard.

The deputies say they wrote out the reports for the stolen property just days before.

The raid started Friday night, according to SLED. It's reportedly part of an ongoing investigation involving multiple jurisdictions that could have ties to counties in North Carolina as well. Sheriffs from other jurisdictions were there as well as SLED and ATF.

"None of us have ever seen anything anywhere close to this," Brooks said. "No telling how many break-ins this will held wrap up."

Over 100 law enforcement officials were on the scene Friday and Saturday. Brooks says 20 agents will be sifting through the evidence "piece by piece" starting Monday. Their goal will be to eventually find the rightful owners. Deputies estimate that 99 percent of the seized goods were stolen.

Brooks says Nicholson lived at the home where the items were found. It is believed that other people stole the guns for him.

Rusty Fender says he has lived next to Nicholson his entire life and never suspected the hoarding of weapons.

"He's always been a good cat, but you know, people do things," said Fender.

Fender said the discovery of the weapons scared him and explained that the recent investigation has raised a lot of questions.

When asked what Nicholson was doing with so many guns, Brooks said, "(he) looks like a gun hoarder to be honest with you." Deputies have found no evidence that he ever sold any of the guns.

Fender said he can't remember a bigger event happening near Pageland during his years living in the area. He explained that ultimately he is happy the weapons have been seized.

"I don't understand why he done the things he done, but I'm glad it's off the streets."

Nicholson and his father ran a liquor store in Pageland, but according to Brooks it's been on his radar for a long time in connection to cases of stolen property.

Warrants were also drawn up for his fathers home, their liquor store, and a farm that Nicholson owned.


0 Replies
1
Reply Mon 26 Oct, 2015 06:16 am
So he was arrested for having stolen property. Sounds like proper law enforcement.
1 Reply
4
Reply Mon 26 Oct, 2015 08:12 am
@McGentrix,
The man clearly wasn't a gun enthusiast. I doubt he could have even put ammo to the right weapon the way they were tossed in there. Love the hunting trophy collection as well.

Good job by law enforcement spotting the stolen property. I don't know that I would have recognized stolen property on the porch unless it was mine.
0 Replies
5
Reply Mon 26 Oct, 2015 08:19 am
It's pretty horrifying to think that 7,000 guns were so easily stolen and sold.

So much for the idea of responsible gun owners keeping their weapons locked up....
2 Replies
2
Reply Mon 26 Oct, 2015 02:19 pm
@boomerang,
That's pretty much my take away. And the other crazy thing the sheriff sid, that the department was beginning to get suspicious. AND that most of those firearms were replaced one way or another.

It's pretty horrifying to think that 7,000 guns were so easily stolen and sold.

So much for the idea of responsible gun owners keeping their weapons locked up....


I doubt there is a single weapon in that pile from a "responsible gun owner". They keep theirs locked up. Those weapons would be from irresponsible gun owners. See, that's how it works. If your gun gets stolen, it's because you are irresponsible.
3 Replies
3
Reply Mon 26 Oct, 2015 05:10 pm
@McGentrix,
Yeah, right. If people know or learn that you have firearms, and they want 'em, they can break in and get 'em. Unless, of course, you have them in a vault under your house made from armor-plate quality steel embedded in concrete. Targeted burglaries of gun owners was identified by the RCMP as a major source of illegal firearms on the streets of Canadian cities.
0 Replies
2
Reply Mon 26 Oct, 2015 08:03 pm
@McGentrix,
Why would someone collect so many deer heads?
1 Reply
1
Reply Tue 27 Oct, 2015 05:59 am
@McGentrix,
So you support gun control legislation that would keep guns out of the hands of "irresponsible"gun owners. About time.
1 Reply
1
Reply Tue 27 Oct, 2015 06:03 am
@glitterbag,
Its the manly thing to do, collect a trophy from a sporting mano a mano fight to the death with an armed opponent.

Mmmmmmm ..... smell that Testosterone? That's the smell of victory.

So you support gun control legislation that would keep guns out of the hands of "irresponsible"gun owners. About time.


I know you're trying to be funny, but I always have. I've never said that I think everyone should have guns. I support back ground checks and firmly believe that people that cannot responsibly own weapons should not.

However, responsible, trained people should have access to guns with limited hoops to jump through.
1 Reply
2
Reply Tue 27 Oct, 2015 07:00 am
@McGentrix,
Its the hoops that trip up the whackos.
0 Replies