My favorite bird this year is the Mockingbird. These guys know how to annoy by chirping different songs all day and night.
Last year it was cedar wazwings. The "biker "bird.
They would fly in in a gang, eat crab apples that are slightly rotten and then get stinking drunk from the fermented fruit. They would actually fall over on their perches
0 Replies
2
Reply Thu 23 Jul, 2015 04:26 am
@edgarblythe,
And birds are a specialized form of dinosaur. Not too shabby.
1 Reply
2
Reply Thu 23 Jul, 2015 05:11 am
Crow Blacker Than Ever

But Crow Crow
Crow nailed them together,
Nailing heaven and earth together-

Then heaven and earth creaked at the joint
Which became gangrenous and stank-
A horror beyond redemption.

The agony did not diminish.

Man could not be man nor God God.

Crying: “This is my Creation,” Flying the black flag of himself.

This is Foxy, our neighbor's duck, and our neighbor's dog's duck (they were pals); this photo is taken at our back porch, as she wanted to go in. (No, I don't remember ever feeding her.)

One time she did get in, arriving in the dining room where she bent the blinds. We left them bent - she managed to fly out, her trip wasn't all that destructive, and of course, she was our guard duck too.

This undated handout image provided by Ohio University shows a fossil skull of the terror bird Andalgalornis, compared with the skull of a modern-day golden eagle and a human skull for scale. Andalgalornis was an extinct, 4.5-feet-tall, flightless predatory bird found as 6-million-year-old fossils in northwestern Argentina. (AP Photo/Ohio University)
1 Reply
2
Reply Thu 23 Jul, 2015 08:16 pm
@farmerman,
I love cedar waxwings! My dad had a row of shrubs that have winter berries planted in front of the kitchen window in the house I grew up in.

The kitchen sink was in front of the window. I loved to do dishes with my mother when I visited in the winter - watch the cedar waxwings eat those fermented berries, hang upside down and then fall off the branches. There was also a yellow finch troop that occasionally dropped by for a booze-up as well

1 Reply
1
Reply Thu 23 Jul, 2015 08:26 pm
@ehBeth,
the waxwings are great. I can sit in our sun room on a winter day and watch em for hours. They are real comedians.
We have several crabapple, serviceberry and kwanzan trees so there are berries and fermented fruits galore
0 Replies
0
Reply Thu 23 Jul, 2015 10:42 pm
@edgarblythe,
edgarblythe wrote:

This undated handout image provided by Ohio University shows a fossil skull of the terror bird Andalgalornis, compared with the skull of a modern-day golden eagle and a human skull for scale. Andalgalornis was an extinct, 4.5-feet-tall, flightless predatory bird found as 6-million-year-old fossils in northwestern Argentina. (AP Photo/Ohio University)

I thought the terror birds were more like 10 feet tall.

And birds are a specialized form of dinosaur. Not too shabby.

Those raptors with the wicked hook claw on their feet were so closely related to birds that they had feathers.

T-rex had feathers too.
1 Reply
1
Reply Thu 23 Jul, 2015 11:10 pm
I was thinking about starting a thread on animal intelligence, and I've done some poking around on the Internet. A few birds show up on a number if intelligence lists. First up: crows. Also ravens, some kinds of parrots (special mention of the African gray), and pigeons.
1 Reply
2
Reply Thu 23 Jul, 2015 11:13 pm
@Roberta,
Corvids, in other words. The class includes jays, with which I have had a certain experience.
0 Replies
2
Reply Fri 24 Jul, 2015 04:46 am
@oralloy,
oralloy wrote:

And birds are a specialized form of dinosaur. Not too shabby.

Those raptors with the wicked hook claw on their feet were so closely related to birds that they had feathers.

T-rex had feathers too.


Yes. Any depiction of a therapod dinosaur without feathers is analogous to a depiction of a plucked chicken.
1 Reply
2
Reply Fri 24 Jul, 2015 08:47 pm
@rosborne979,
It's highly likely that most of the raptor dinosaurs looked like this. 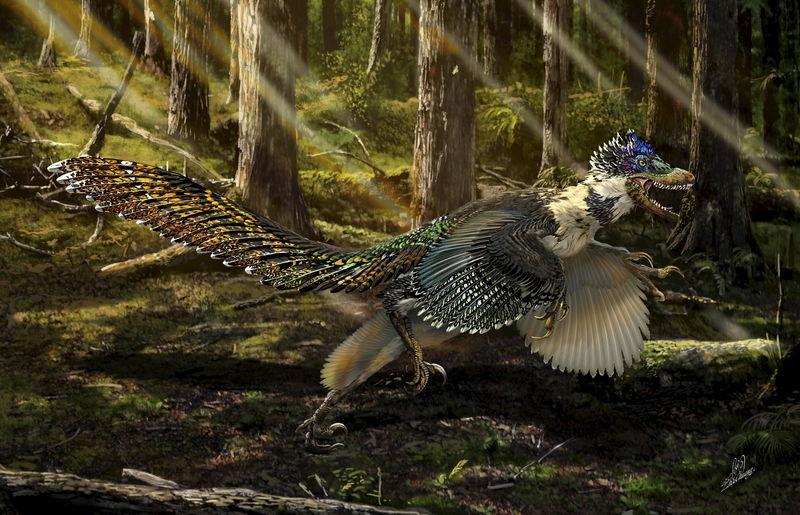 Today we have this: 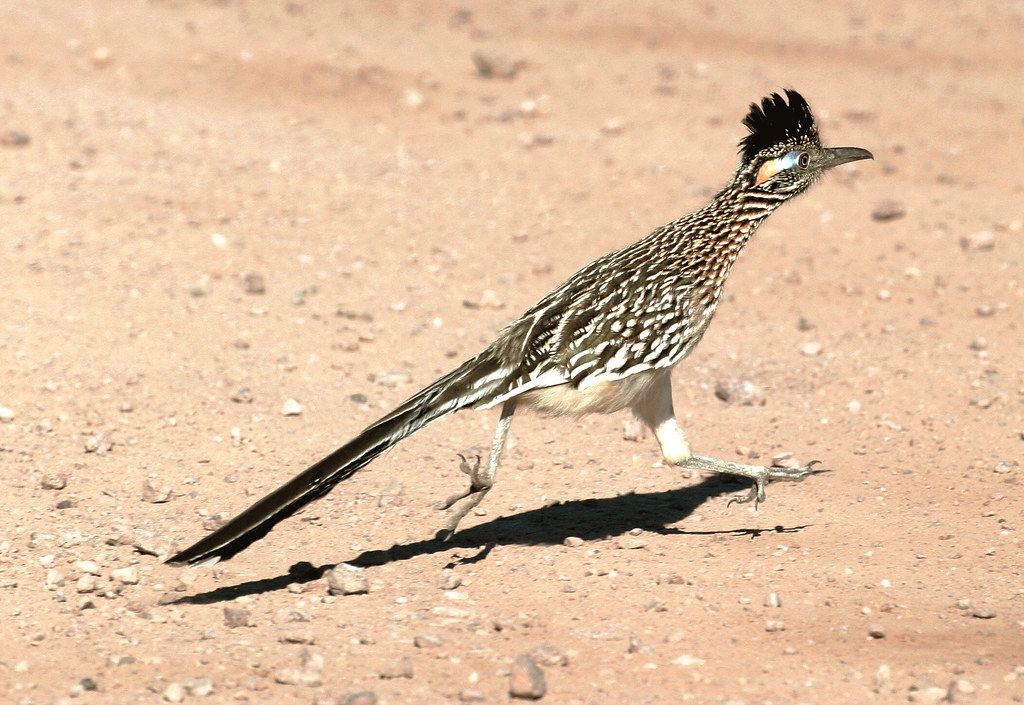 1 Reply
2
Reply Fri 24 Jul, 2015 09:36 pm
@rosborne979,
A lot of the feather hypotheses are re-creations based on wishful thinking and not fact.Many small theropods like the one you pictured did have feathers but larger ones of the Cretaceous may only have had feathers on the young. (sorta like chicks). T rex was one of those. They found one or two fossils of young tRex and they had like "goose bump" spicules and maybe fuzzy feathers for warmth. They probably lost their feathers as the got larger.
A smaller (and geologically separated member of the class ) called Quanlong wucaii was seen in the late Jurassic and was the ancestor to the laterDilong liaoning ensis (I think that was the species name), Quanlong did have feathers throughout the entire life of the dinosaur. They both looked like a crested T rex but were a bout 1/2 as big and had more useful "arms and hands". About 35 genera of feathered dinos were known . Most of them were the coelurosaurs and thedeinonychosaurs They were from a different linneage (the Dromeosaurs)than the baby T rexes and the Quanlong and Dilong critters.Sciuromimus was one of the first found and it was found in bavaria by a guy from Rutgers. The fossil was like that of an ornithischian dinosaur (bird hipped species) and its name means "Squirrel tail mimic". It was a raptor and sported a feather coat but more like a "fuzz" than the darwing you presented. (A lot of the popular press stuff mixes up the genera and their ages )

The actual number of dinosaurs with feathers is still really not great but its enough to make the story of the development of feathers from dinos to birds a real observation and not bullshit.

"nature and Nat Geographic style Magazines started the bandwagon to spread the story that all dinosaurs were showing feathers and THATS just made-up stuff for the popular science press.

Many many dinos have been presented as "proving" that they bore feathers when it was later seen that the "spicules" were evidence of muscle attachments and not feathers.


But the dromaeosaurs (the raptors) , when they first appeared, began to show their arms to be sporting all kinds of nifty feather arms (almost wing-like) before the true birds appeared

The story about the true birds and their separateion from a common ancestor of dromaeosaurs probably happend as early as the mid Jurassic , (but we are alas, short of proof fossils). Bird evolution still remains speculation and needs more good evidence from the mid to late Jurassic. Its more problem with the environment of fossilization than an iissue with the validity of evolution
As much as the science hates it, archeopteryx still is a feathered bird-like lizard or is a lizard-like bird. Its almost our best example of the development and evolution of teh Aves
Sorry

1 Reply
2
Reply Fri 24 Jul, 2015 09:43 pm
I absolutely love birds, if I could wake up early enough I'd be out taking videos of birds doing bird things. My brother acquired a parakeet when his brother-in-law's parakeet fell in love with him. Whenever he and Diane went to see her brother, the bird would tweet furiously until he was let out and he would fly to my brothers head or shoulder. Eventually the BIL gave Mike the bird because the bird was so unhappy when my brother wasn't around, so he gave him to Michael and the 2 lived happily together.
when Mike would get in the shower, Mo would perch on the rod until the water really got going then he jumped on mikes head and get drenched. that bird loved to be as close to him as possible.

A lot of the feather hypotheses are re-creations based on wishful thinking and not fact.

A lot is based on cladistics, and seeing how closely certain dinosaurs were related to birds.

Many small theropods like the one you pictured did have feathers but larger ones of the Cretaceous may only have had feathers on the young. (sorta like chicks). T rex was one of those.

How about those raptors with the wicked hook claws on their feet?
2 Replies