Everyone is concerned about Islamic “extremism”, yet no one is allowed to talk about it.

With at least 109 verses of violence in the Qur’an and over 25,000 acts of Islamic terrorism worldwide only since September 11, 2001, violent fatwas issued by modern clerics against women and apostates on a regular basis, and not a single Muslim authority willing to challenge this violent Qur’an, it’s no wonder that the majority of Americans on both sides of the political spectrum are concerned about Islam and its adherents.

The current Administration shows no regard for what the public thinks or wants. Vice President Joe Biden recently said that the “wave” of immigration will not stop. (Almost sounds like a threat.) And in a recent speech the President assured us that, “we are not at war with Islam. We are at war with people who have perverted Islam.”

But those people are following a violent religion, and no criticism of their prophet is permitted. Furthermore, as Muslim immigration has increased, so too has Muslim terrorism against the West. Surely these “brilliant” politicians can make that connection?

The only conclusion that can be made from the results of these Pew studies is that when answering survey questions, Americans freely admit their concern over Islam and Muslim immigrants, no matter what their political affiliation, but they do not dare express their fears with the PC police looming over us all.

Americans are worried but are not allowed to say it. Je suis Charlie?

For the emasculated tagger, In God we Cower?

In the grand scheme of things, it is the clergy of various religions who bear the guilt. Kind of makes you wonder how long before God gets fed up

and ColdDope is still a Hater.

That is what could be called a highjacking of a religion. There is not one thing in Christian doctrine to sanction such actions. Also Einstein who are Christians killing now.

Back to religious doctrine. Islam condones any action that advances Islam. It includes rape, beheadings and terror. Get a Koran and Hadith, it is all in there.
1 Reply
2
Reply Fri 27 Feb, 2015 07:29 pm
@coldjoint,
coldjoint wrote:

Thanks for recognizing my intellect. But it doesn't take genius to discern that every one who takes part in warfare has been assured by some priest or savant that he is serving a higher power or greater good.

every one who takes part in warfare has been assured

For Muslims their part in warfare is an obligation. And Albert you did not answer my question. Who are Christians killing, or threatening to kill, now?
2 Replies
2
Reply Fri 27 Feb, 2015 07:47 pm
@coldjoint,
Put your question another way:
Are there any nominal christian denominations whose members are told not to take up arms?

BTW, I agree that IS has a singularly evil perspective.

That perspective is not singular. Surveys have shown a lot of support from so called moderate Muslims. I have posted them.

Muslims learn from the same book that says in its first Sura that the Koran is literal. As the world has seen there is no concerted by Arab nations to kill these savages. What does that tell you?
0 Replies
-1
Reply Fri 27 Feb, 2015 08:13 pm
@neologist,
Quote:

God gets fed up

Some thoughts, several years before the start of the Tenth Crusade.
"History does not always repeat itself: sometimes it screams 'Why won't you ever listen to what I'm SAYING?' and then hits you with a club."

A serious invasion of Lebanon by ISIS could unleash a bloodbath that makes the civil war in Syria look like a bar fight with pool sticks and beer mugs. It would be tantamount to a Nazi invasion. Every family in Lebanon is armed to the gills thanks to the state being too weak and divided to provide basic security, but people anywhere in the world facing psychopathic mass-murderers will fight with kitchen knives and even their fingernails and teeth if they have to.

The only good thing that might emerge from an attempted ISIS invasion is that the eternally fractious Lebanese might finally realize they have enough in common with each other to band together for survival and kindle something that resembles a national identity for the first time in their history.

…and they had better, because the absolute last thing we need right now is a nascent Dark Empire* with reliable access to the Mediterranean. Southern European military strategists from the Ancient Romans on have either dreaded, or scrambled to counter, such a scenario; what fun that we may see it in our lifetimes, if not the current election cycle. And if you think that I am talking about this problem in archaic terms, well… funny thing about that. Apparently, nobody thought to mention that ‘the end of history’ apparently meant that we’d just have to go back to the beginning and start over.

The next step in all of this, by the way, is to lock down when the West is going to wholeheartedly intervene in rescuing our allies in the region… and we’re going to have to. If we don’t intervene to rescue Lebanon, we’ll just have to do it for Jordan. If we don’t do it for Jordan, we will have to do it for Saudi Arabia, because Saudi Arabia has all that oil that we definitely don’t want under the control of a death cult running a Dark Empire. The sooner we do it, the fewer people will die because of it. So it would behoove the President to start the process now.

It’s amazing, really: after listening to the most unhinged elements of the Left incoherently rant for most of a decade about how Bush was trying to start a Crusade, we’re actually going to end up doing one (although Robert Tracinski was really careful not to use that particular word, there). And we’re probably going to be fighting in generally the same areas where the Crusader states were. I really, really wish that Barack Obama, his staff, or even his sycophants had ever read some Medieval history…

PS: The people hyperventilating at the sight of the word ‘Crusade’ right now are the exact same people who got us into this mess in the first place when they encouraged this administration to run pell-mell out of Iraq, just in time for a death cult to move in. So I really don’t care if those people are upset. In fact, I kind of hope that they are.

*’Empire,’ for the benefit of anitwar progressive Democrats and other functional illiterates, classically refers to a geopolitical situation where a core area controls a number of distinct but subservient outer areas. This would pretty much describe any situation where ISIS conquers a cosmopolitan state like Lebanon, or even Jordan. Or both. As for ‘Dark’… look, I don’t want you reading this if you’re prepared to contest that ISIS isn’t evil to the core.

Sorry if I confused ya!

I do admit to being confused by theists! 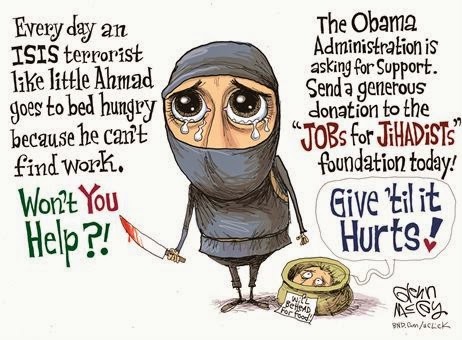 I do admit to being confused by theists!

0 Replies
0
Reply Sun 1 Mar, 2015 04:47 pm
@coldjoint,
Jobs for Jihadists...they are just trying to get a head.
(I kill me!)
0 Replies
2
Reply Sun 1 Mar, 2015 06:30 pm
@coldjoint,
It is not a new concept - the idea that a religious or ethnic group could do something to bring about the end times. Nominal christians have long held the idea that natural Jews must inhabit the holy land in order for the battle of Armageddon to take place. (The idea is derived, in part, from association with the word Armageddon, lit. 'Har Maggeddon', with the plains of Megiddo, a singularly important military site from before our common era.) If you are looking for a core reason for Anglo American support of Israel, here it is. Reassuring, isn't it?

I find it interesting to observe these otherwise diverse groups all laboring in the fantasy that human efforts will bring about God's action. They will, of course, but not in the way expected. The reality is that, in time, world political elements will tire of religious violence and meddling in affairs of states. The demise of religion is described in Revelation, ch. 17, 18.
1 Reply