"C.J. Phillips and Charlie Rainwater, two self-described "high-tech bears," talk with Rachel Maddow about how they came to own JebBushForPresident.com and how they hope to use the URL to raise awareness about gay issues. ....." 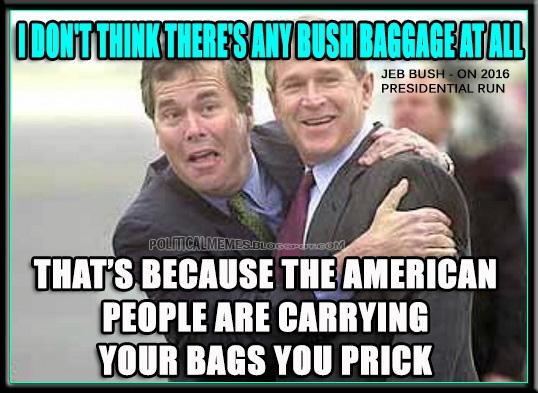 0 Replies
-1
Reply Tue 10 Feb, 2015 08:13 am
Guess what, losers?? That's right, your little wet dream about campaigning against Jeb Bush is just that, i.e. a wet dream. You're most likely going to get to campaign against Scott Walker, who has rescued and salvaged thes tate of Wisconsin from the effects of decades of de-moKKKer-Rat malfeasance and mysgovernment. You should pray for luck, you're gonna need it. 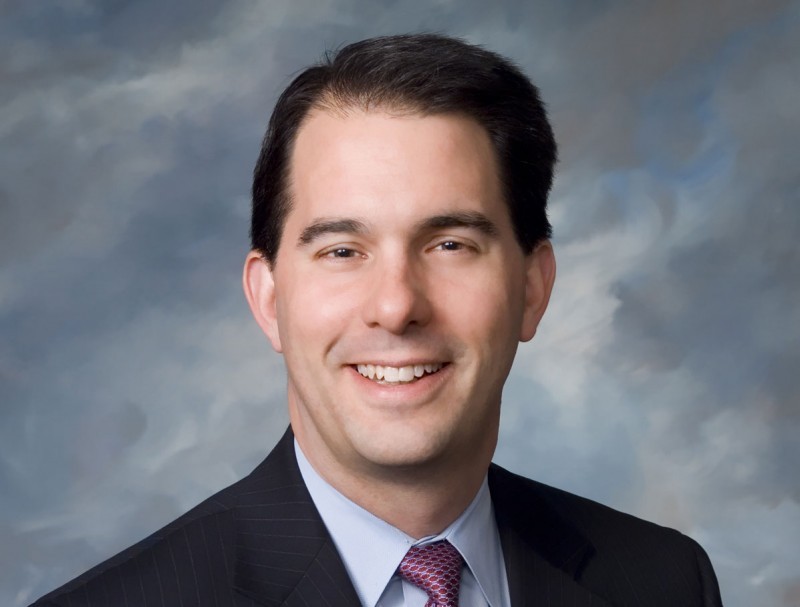 jeb-bushFormer Florida governor Jeb Bush continued his campaign for the 2016 Republican presidential nomination this morning by further distancing himself from his unpopular sibling.

In an interview on Good Morning America, Jeb Bush finally admitted that although he loves his brother George W. Bush dearly, the former two-term president is sometimes "an idiot"

In the studio to promote his recent book, the younger Bush faced questions about his U-turn on immigration reform, his family's political legacy, and his plans for 2016. The highlight came, however, when George Stephanopoulos asked Jeb about his thoughts on his brother's presidency.

"You have to admit though," Stephanopoulos asked, "That whatever your political leanings, your brother George W. Bush wasn't the brightest president we've ever had."

"Well you know I love my brother," Jeb responded, "I think he's a wonderful person. But we've always said in my family that George got the looks and I got the brains.

"He made a lot of mistakes as president, there's no question. But he didn't make those mistakes because he's a bad guy. My brother, he's just an idiot sometimes. But deep down, he has a good soul."
Heckuva Job Jeb

Pressed to list his brother's mistakes, Jeb repeated some familiar laments of the Bush years:

"Obviously Katrina was an embarrassment. We should have done more quicker. And I think the war in Iraq could have been planned better at the very least.

"But my biggest concern about my brother's legacy is what his presidency did to our standing around the world. My father presided over the end of the Cold War and left office with pro-Americanism rising everywhere.

"In the mid-2000's it was disheartening to see how far we had fallen. There were American tourists in Europe and Asia pretending to be Canadian."

"Why do you think George W. Bush's presidency was such a failure?" Stephanopoulos brazenly asked.

"Well, hold on there a minute," Jeb objected, "I never said his presidency was a failure. My brother had a lot of accomplishments. Taxes were lower than they had ever been, the economy had six straight years of solid growth, and I'll....well I'l think of a third one later.

"But as to your question, I think there were people around my brother - Dick Cheney was one, Paul Wolfowitz was another - who used his naïveté and inexperience to manipulate policy for their own ends.

"So I think its a mixed legacy, and I'd like to remind the American people that I have different views than my brother, I have more executive level experience, and - most importantly - I am my own person."

Jeb Bush served as Florida's governor from 1999 to 2007 and is often mentioned as a possible 2016 presidential candidate. He the author of the recent book Immigration Wars: Forging An American Solution.
0 Replies
1
Reply Tue 10 Feb, 2015 08:38 am Everyone who has worked in politics for more than 10 minutes knows that you can't do campaign work from your official office, on the taxpayer's clock. And what happens if you do? Well, you can actually go to jail. And the secret email system you set up to enable you to do campaign work when you're supposed to be doing official business can be revealed. And then it can seriously undermine your boss' nascent presidential campaign. That's what can happen. And that's what's happening to Scott Walker, the governor of Wisconsin.

Six of Walker's former aides and associates have been convicted of using government resources to do campaign work, and as a result of the investigations, 28,000 pages of emails have now been released, most from the email files of Kelly Rindfleisch, who was Walker's deputy chief of staff when he was Milwaukee County Executive and running for governor in 2010.

In fairness to Walker, he did instruct his people in one of the emails not to do campaign work on official time: "We cannot afford another story like this one. No one can give them any reason to do another story. That means no laptops, no websites, no time away during the work day, etc."

On the other hand, his chief of staff, Thomas Nardelli, informed other staffers that Walker wanted a daily conference call including members of his official staff and his campaign staff so they could coordinate their efforts.

The emails contain some colorful details. In one exchange, Nardelli informs Walker that he has discovered that a doctor working at the Milwaukee County Behavioral Health Division once did some modeling work. "It isn't pornographic," Nardelli wrote, "but it is quite suggestive (I'm told - I don't know her name). He [sic] apparently models thongs and wasn't forthright in sharing that with staff prior to her hire as an hourly paid MD." Filled with either moral outrage or political foreboding, Walker ordered the woman to be fired forthwith: "Get rid of the MD asap."

And the sensitivity doesn't end here. Kelly Rindfleisch responded to a question about whether the case of a patient who starved to death at the Milwaukee County Mental Health Complex could harm Walker's gubernatorial campaign by writing, "No one cares about crazy people."

In another email, Nardelli forwards a high-larious joke about a nightmare in which the author suffers a series of indignities, culminating in the realization that he's about to meet Barack Obama. "Say it isn't so!!! I can handle being a black, disabled, one armed, drug-addicted, Jewish homosexual on a pacemaker who is HIV positive, bald, orphaned, unemployed, lives in a slum, and has a Mexican boyfriend, but please, Oh dear God, plead don't tell me I'm a Democrat!" Who says conservatives aren't funny?

The yuks just keep coming. Another email, this one from Kelly Rindfleisch, contains this joke: "This morning I went to sign my Dogs up for welfare. At first the lady said, 'Dogs are not eligible to draw welfare'. So I explained to her that my Dogs are mixed in color, unemployed, lazy, can't speak English and have no frigging clue who their Daddys are. They expect me to feed them, provide them with housing and medical care, and feel guilty because they are dogs. So she looked in her policy book to see what it takes to qualify. My dogs get their first checks Friday. Damn this is a great country." Har har!