You try posting in a packed subway at rush hour with 30 seconds to ykour stop.

Why even try? Exercises in futility are a Democratic trait.
0 Replies
4
Reply Sun 14 Oct, 2018 06:55 pm
@oralloy,
Nnice try to twist the facts. He goot no money. He got millionns of people too march against the NRA and its collusion in viollating civil rights of thousandss.
2 Replies
9
Reply Mon 15 Oct, 2018 08:22 am 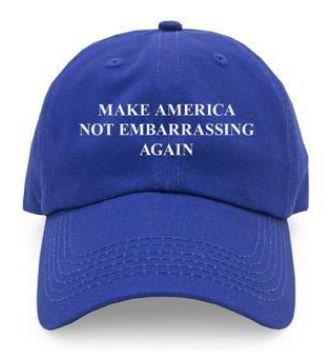 1 Reply
-3
Reply Mon 15 Oct, 2018 09:48 am
@Region Philbis,
No one is embarrassed of having more money in their pockets. And not many people give a **** about Europe or what they think. The real embarrassed are the ones who lost the election and they are simply projecting.
1 Reply
-3
Reply Mon 15 Oct, 2018 12:20 pm
@MontereyJack,
MontereyJack wrote:

Nnice try to twist the facts. He goot no money. He got millionns of people too march against the NRA

Sorry. I misunderstood what you meant by millions.

But the point remains the same. If he convinced millions of people to demonstrate in opposition to civil rights, there is no basis for complaining when he faces the same sort of criticism that other public figures face.

the NRA and its collusion in viollating civil rights of thousandss.

You do realize most people say they havent seen nore money

Calling the NRA a civil rights organization is the worst possible bastardization possible of the term.

Not at all. We have the right to have guns. The NRA protects this right. That makes them a civil rights organization.

They stand for violations of civil rights not protection.

That is incorrect. The NRA protects our right to have guns. It is the Democrats who are out to violate our rights.

Hogg has that correct.

Hogg is just bitter because no one will let him violate their rights.
0 Replies
4
Reply Tue 16 Oct, 2018 07:10 pm
Stinking republicans can't win without cheating.
https://www.msnbc.com/rachel-maddow/watch/gop-aims-to-suppress-nd-native-american-vote-to-hinder-heitkamp-1345087555800?v=raila&
0 Replies
5
Reply Tue 16 Oct, 2018 08:24 pm
Republicans Aren’t Running on Taxes Anymore. They’re Running on Bigotry. The GOP has abandoned its plans to run on economics in favor of the playbook that worked for Trump in 2016.


“The tax bill is part of a bigger theme that we’re going to call The Great American comeback,” said Ohio Rep. Steve Stivers, chairman of the National Republican Congressional Committee, at the committee’s planning retreat in February. “If we stay focused on selling the tax reform package, I think we’re going to hold the House and things are going to be OK for us.”

Republicans tried to stay focused. They talked about the tax cuts and touted economic growth—”After years of stagnation, our economy is finally on the rise. By just about any economic measure, the American people are better off now,” said House Speaker Paul Ryan over the summer. But as of Tuesday, just three weeks before the midterm elections, Republicans are trailing Democrats by nearly 9 percentage points in the congressional generic ballot. FiveThirtyEight gives them a “1 in 5” chance of holding a majority in the House of Representatives. President Trump is still historically unpopular, moderate and independent voters are leaving the GOP in droves, and Democrats are highly motivated to vote.

With the party behind and bereft of further accomplishments to show voters, Republicans have abandoned their script. Instead, they’ve embraced the path set out by Trump in the 2016 presidential election: constant, unyielding demonization of their opponents.

Trump, of course, is leading the charge. “If Democrats are willing to cause such destruction in the pursuit of power, just imagine the devastation they would cause if they obtained the power they so desperately want,” he said last week at a rally in Kansas, attacking Americans who gathered at the U.S. Supreme Court building to protest the confirmation of Brett Kavanaugh. “You don’t hand matches to an arsonist, and you don’t hand power to an angry, left-wing mob, and that’s what they have become.”

Congressional Republicans are on the same page. “They have encouraged mob rule,” said Chuck Grassley, attacking Senate Democrats. Likewise, in an interview with NPR, Majority Leader Mitch McConnell cited “the mob” when he praised Republicans for confirming Kavanaugh. “We stood up to the mob, and we also stood up for the presumption of innocence in this country,” McConnell said.

Republicans in tight re-election fights have also begun slamming their opponents as terrorists and terrorist sympathizers. In California, Rep. Duncan Hunter has accused Democratic opponent Ammar Campa-Najjar as being a “security risk,” attempting to tie him to “Islamists” and “radical Muslims trying to infiltrate the U.S. government.” This is false, but Hunter—under federal investigation for misuse of campaign funds—is vulnerable and has made anti-Muslim bigotry a key part of his campaign.

In Virginia, where Republican Rep. Dave Brat faces Democrat Abigail Spanberger in a closely watched race for the state’s 7th District, a GOP super PAC aligned with Paul Ryan has run ads attacking Spanberger for her ties to a Muslim high school in Northern Virginia where she briefly taught English. In 2005, a graduate of that high school was sentenced to 30 years in prison for attempted terrorism. There’s no substance to the attack: It’s guilt by association that, like Hunter’s charge, leans on anti-Muslim prejudice.

What’s striking about these attacks, and the charges of “mob rule” in particular, is how they seek to delegitimize Democrats and Democratic opposition. It’s not just that Republican lawmakers disagree with their Democratic challengers’ positions, it’s that the latter are pawns for America’s enemies. Like Republicans in the wake of Obama, Democrats are channeling grass-roots energy in boisterous—but normal—expressions of political behavior. But to Trump and the Republican Party, this isn’t democracy in action, it’s an illegitimate violation of the political order.

What’s striking about these attacks, and the charges of “mob rule” in particular, is how they seek to delegitimize Democrats and Democratic opposition.
You can understand President Trump’s constant (and false) reference to paid protesters as a similar declaration of disbelief in civil society opposition. Real Americans, in the president’s view, aren’t protesting—they’re at his rallies, shouting down the free press.

None of this is new, strategywise. During the George W. Bush administration, Republicans routinely cast Democrats as “weak on terror” to the point of accusing them of sympathizing with terrorist aims. During Barack Obama’s tenure in the White House, conservative activists cast liberals and liberal policy as existential threats to the republic. But in age of democratic backsliding—where a president who praises dictators is actively hostile to democratic norms and representative institutions, and where his party is fighting to entrench rule by minority—these attacks take on a more sinister light, particularly given their frequency and lack of any grounding in reality.

Republicans aren’t favored in November, but they could still win. And if the attacks on Democratic candidates and agitators are serious, and not just rhetoric, then they could have real consequences. Already, Trump is pursuing restrictions on protest at the White House. With his regular chants of state action against his Democratic rivals—“Lock Her Up!”—are we confident he won’t try to actualize the latter? If he and his party faces down a “blue wave” and survives, we might be in deeper than we realize.
1 Reply
-4
Reply Tue 16 Oct, 2018 09:02 pm
@neptuneblue,
Quote:

Where have you been? Everyone knows that is a narrative and is just not true. I do not even need to read it to know another issue is conflated with bigotry. And using Muslims is a classic.
2 Replies
5
Reply Wed 17 Oct, 2018 06:12 am
@coldjoint,
coldjoint wrote:

Everyone knows that is a narrative and is just not true.


Ooh. Wait, what do you always say to claims made by the left... ehm. Oh yeah, right, now I remember.

0 Replies
1
Reply Wed 17 Oct, 2018 11:02 am
'They're Doing Us Like They Did New Orleans': Anger at Trump Inaction as Hurricane Michael Leaves Millions Without Power and Basic Needs
"We're not getting any help. We need food. It's just crazy."
https://www.commondreams.org/news/2018/10/15/theyre-doing-us-they-did-new-orleans-anger-trump-inaction-hurricane-michael-leaves