Republican governor runs the state into the ground.

The lesson here is, if a state can avoid a republican governor they can avoid the corruption that republicans surely unleash on government.
0 Replies
5
Reply Fri 3 Dec, 2021 10:17 am 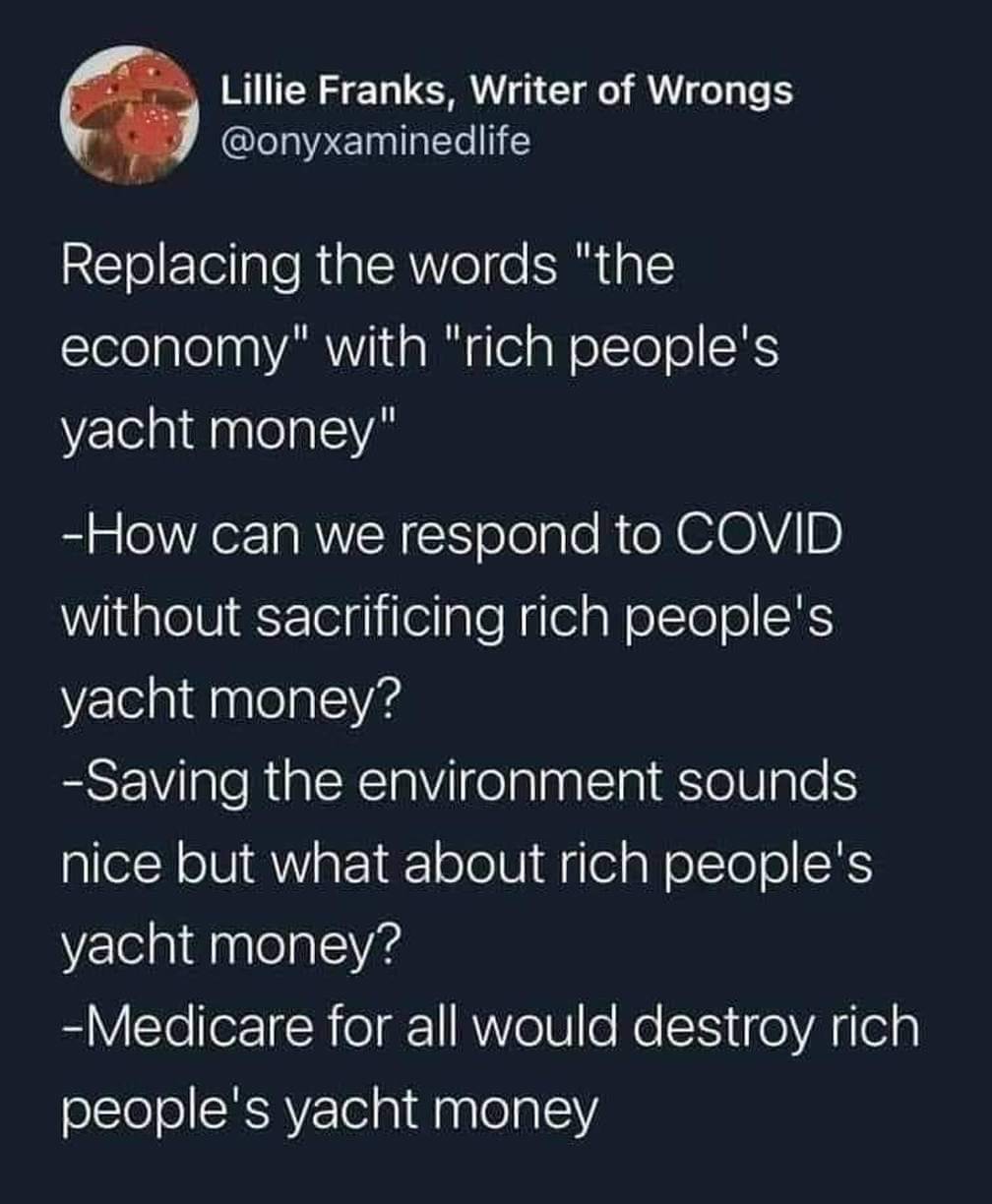 Comment:
Do you think some republicans should also be charged for this shooting? The ATF searched a storage unit owned by Cuney on November 14, 2019, and found the following items:

Two (2) Glock pistols,
Seven (7) additional handguns,
Three (3) rifles,
One (1) shotgun,
Five (5) machinegun conversion kits,
More than ten (10) silencers, and
More than 1,000 rounds of assorted rifle and handgun ammunition.
Cuney is described in the press release as a member of the far-right group Proud Boys since 2018.

Comment:
Who exactly is this trying to overthrow our government?
Is overthrowing a democratic government a legal right? No!
0 Replies
4
Reply Mon 6 Dec, 2021 09:56 am
Donald Trump’s media company deal is being investigated by securities regulators.
https://www.nytimes.com/live/2021/12/06/business/news-business-stock-market

Comment:
Join Trump social media and if you have a thousand dollars to donate Trump will give you a free diploma!
0 Replies
3
Reply Mon 6 Dec, 2021 01:21 pm

Comment:
...and, they should be responsible for the bills of those they infect if they have been vaccinated.
0 Replies
3
Reply Thu 9 Dec, 2021 04:01 pm
Court rejects Trump's efforts to keep records from 1/6 panel
Source: Associated Press

WASHINGTON (AP) -- A federal appeals court ruled Thursday against an effort by President Donald Trump to shield documents from the House committee investigating the Jan. 6 insurrection at the Capitol. ... The three-judge panel said there was a "unique legislative need" for documents that the committee has requested but whose release Trump has sought to block through executive privilege.

The appeals court ruled that the injunction that has prevented the National Archives from turning over the documents will expire in two weeks, or when the Supreme Court rules on an expected appeal from Trump, whichever is later. ... The House committee and Trump representatives did not immediately respond to requests for comment Thursday.

Trump sued the House Jan. 6 committee and the National Archives to stop the White House from allowing the release of documents related to the insurrection. President Joe Biden had waived Trump's executive privilege claims as the current officeholder.

The National Archives has said that the records Trump wants to block include presidential diaries, visitor logs, speech drafts, handwritten notes "concerning the events of January 6" from the files of former chief of staff Mark Meadows, and "a draft Executive Order on the topic of election integrity."

A local Michigan Republican official who refused to certify Joe Biden’s presidential victory in his county and who vehemently opposed vaccines has died of COVID-19. William Hartmann, 63, succumbed to the coronavirus on Nov. 30 in a hospital in Wyandotte, Michigan. Hartmann, who spread lies and conspiracy theories about the election via his Facebook page, and a fellow Republican on the Wayne County Board of Canvassers, Monica Palmer, initially declined to certify the tallies of 2020 presidential election votes in their county after the results had come in. Biden more than doubled former President Donald Trump’s count, with 68 percent of the vote to 31. The board is composed of four people—the other two were Democrats—so Hartmann and Palmer’s refusal threw the election in the swing state briefly into chaos. They later did certify the vote counts, then tried to rescind their certifications, though it was too late. Hartmann, who said on Facebook that vaccine passports resembled Nazi Germany’s draconian laws, is the latest in a long line of vocal vaccine opponents, often outspoken Republicans, to die of the respiratory illness.

0 Replies
3
Reply Sat 11 Dec, 2021 12:02 am
A Party, and Nation, in Crisis
The GOP’s leaders are ​​attempting to destroy the foundations of American democracy.

In october of 1860, The Atlantic’s first editor, James Russell Lowell, wrote of Abraham Lincoln that he “had experience enough in public affairs to make him a statesman, and not enough to make him a politician.” Lowell, in his endorsement, was mainly concerned not with Lincoln’s personal qualities but with the redemptive possibilities of his new party. The Republicans, Lowell wrote, “know that true policy is gradual in its advances, that it is conditional and not absolute, that it must deal with facts and not with sentiments.”

There is insufficient space in any one issue of this magazine to trace the Republican Party’s decomposition from Lincoln’s day to ours. It is enough to say that its most recent, and most catastrophic, turn—toward authoritarianism, nativism, and conspiracism—threatens the republic that it was founded to save.

Stating plainly that one of America’s two major parties, the party putatively devoted to advancing the ideas and ideals of conservatism, has now fallen into autocratic disrepute is unnerving for a magazine committed to being, in the words of our founding manifesto, “of no party or clique.” Criticism of the Republican Party does not suggest an axiomatic endorsement of the Democratic Party, its leaders and policies. Substantive, even caustic, critiques can of course be made up and down the Democratic line. But avoiding partisan entanglement does not mean that we must turn away from the obvious. The leaders of the Republican Party—the soul-blighted Donald Trump and the satraps and lackeys who abet his nefarious behavior—are attempting to destroy the foundations of American democracy. This must be stated clearly, and repeatedly.

“There will be no recovery from this crisis until the Republican Party recommits itself to democracy,” says this magazine’s David Frum, who was one of the first writers to warn that America possessed no special immunities against demagoguery and authoritarianism.

In 2020, we asked another of our staff writers, Barton Gellman, to examine the ways in which Trumpism was weakening the norms and structures of American democracy. We published his cover story “The Election That Could Break America” before the election, and well before the insurrection of January 6. “Something far out of the norm is likely to happen,” Gellman wrote. “Probably more than one thing. Expecting otherwise will dull our reflexes. It will lull us into spurious hope that Trump is tractable to forces that constrain normal incumbents.”

As we know, the system held, but barely, America having been blessed, once again, by dumb luck. (The bravery of police officers on Capitol Hill, and the wisdom of a handful of state and local officials, also helped.) When President Joe Biden was safely inaugurated, two weeks after the attack on the Capitol, a belief took hold that Trump, and Trumpism, might very well go into eclipse.

But that belief was wrong. Which is why we asked Bart to examine, once again, the state of our democracy and the various attempts by Trump and other leading Republicans to claim power through voter suppression, subterfuge, and any other means necessary. His current cover story, “January 6 Was Practice,” suggests that we are close—closer than most of us ever thought possible—to losing not only our democracy, but what’s left of our shared understanding of reality.

You will find in this issue other essays and reporting that illuminate the political, moral, and epistemological challenges we face today, including an investigation by Vann R. Newkirk II into Republican voter-suppression efforts, and an article by Kaitlyn Tiffany on a child-sex-trafficking panic intensified by the far right’s descent into conspiratorial thinking. The crisis is in good measure a crisis of the Republican Party. A healthy democracy requires a strong conservative party and a strong liberal party arguing for their views publicly and vigorously. What we have instead today is a liberal party battling an authoritarian cult of personality. As David Brooks writes in his essay “I Remember Conservatism”: “To be a conservative today, you have to oppose much of what the Republican Party has come to stand for.”

The Atlantic, across its long history, has held true to the belief that the American experiment is a worthy one, which is why we’re devoting this issue, and so much of our journalism in the coming years, to its possible demise.

This article appears in the January/February 2022 print edition with the headline “A Party, and Nation, in Crisis.”