Forums: Autos, Legal, Driving, Whining, Hypocrisy
Email this Topic • Print this Page
3
Reply Wed 13 Aug, 2014 06:16 pm
Hmmmm . . . i must remember not to take a ride with Roger at night.
1 Reply
0
Reply Wed 13 Aug, 2014 06:25 pm
@Setanta,
I travel a lot and have noticed that typical speeds on our highways vary a great deal from region to region. What would seem fast in (say) eastern Pennsylvania, would get you run over in Wyoming . Anyone who has driven on U.S. Route 50 between Fallon Nevada and the Rocky mountains knows that it's very hard (and decidedly unusual) to stay below 80 mph. Here, as in many areas, sweeping generalizations are usually wrong.
1 Reply
2
Reply Wed 13 Aug, 2014 06:29 pm
I've driven like a bat out of hell in Texas, at night, on a straightaway that ran for over a hundred miles. So i understand tta aspect of it But the thread, before Max showed up with his hilariously improvable claims, was about the overall speed limit for the province of Ontario. State-wide and province-wide speed limits are, usually, based on the traffic engineers best estimates. I don't like to argue with that sort of thing. If a state allows 80 miles per hour on some highways, i'm Ok with that. If i don't want to chance it, i'll take another route.
0 Replies
2
Reply Wed 13 Aug, 2014 06:30 pm
@georgeob1,
georgeob1 wrote:

. . . Here, as in many areas, sweeping generalizations are usually wrong.

Even this one.
0 Replies
1
Reply Sun 17 Aug, 2014 03:46 pm
@maxdancona,
I remember that when the limit in California was 55, most approached 65 in roving grouplings (shut up, spellcheck) but that was still a down turn in mph, from prior speeds.

I've long heard that time is money and know that and real life problems can motivate people for speed, but there is a reason I used to choose highway 101 (picking it up in Oxnard) - beauty, interest, places to eat besides mcdonalds, local cafes, towns to check out. The couple of hours loss was worth it in pleasure.

My business partner back then could make it to LA from the Eureka Arcata area, via connecting with 5, in ten and a half hours. My idea of boring hell but it worked for her and her husband.

0 Replies
1
Reply Sun 17 Aug, 2014 03:59 pm
@maxdancona,
Perhaps there are some people here who say what they are supposed to say, but they haven't come to my notice. Well, the kitchen people are major annoying.

If a2k has a group behavior, it's saying what we think.
1 Reply
0
Reply Sun 17 Aug, 2014 07:44 pm
@ossobuco,
I got pounced on by the group for stating a fairly benign opinion (well before I started biting back).

The whole trip took 7 hours and a lot of it is on I-35 which I read once was the most heavily trafficked road in the country. Wendy Davis the One Hit Wonder Democrat for TX governor is running on the need for improved infra-structure (including roads) which is a laugh, since every major highway in the state is under construction. This includes I-35, which made that part of the trip a nightmare. It was bliss to spend even a small portion of it on 130.

Texas, and Rick Perry was in the news this week, but being on vacation, I paid scant attention to the story. Got filled in on the way home listening to Fox News on Sirius. Apparently he has been indicted for felony abuse of power based on following through on his threat to veto an
appropriations bill for a state agency headed up by the Democrat Travis County DA, unless she resigned her post. He wanted her to resign because she was arrested and convicted of driving drunk---three times the legal limit
drunk---and causing such a ruckus in the process that the cops had to restrain her.

This is an old political trick by the Texan Dems in Travis County. They did it with Kay Bailey Hutchinson and Tom Delay, and in both cases the charges were eventually dropped, although the maneuver was successful in ending Delay's political career.

The goal isn't to get a conviction, it's to get mug-shots and headlines.

If this isn't abuse of power, what is?

In the case of Perry, right-wing mad dogs like David Axelrod, Alan Dershowitz, and Jonathan Chait all agree it's bullshit.

Not only is this one not going bear fruit in terms of a conviction, it's going to blow up in the Dem's faces. Rosemary Lehmberg is hardly a model victim to be defending.

Fortunately Rt 130 is a way to avoid going through Austin, so I was able to avoid the traffic and the stench of Democrat dirty tricks.

Got filled in on the way home listening to Fox News on Sirius.

In the case of Perry, right-wing mad dogs like David Axelrod, Alan Dershowitz, and Jonathan Chait all agree it's bullshit.

Attend, if you will, to this instance of important folks on the left not playing the partisanship-before-truth game. How often this goes on is apparently non-perceivable to you folks in the Fox audience so I take this opportunity to underline the thing, in my role as pedagogue. Bub.
1 Reply
1
Reply Sun 17 Aug, 2014 11:14 pm
@blatham,
Dershowitz is most often a straight shooter on all subjects which is why he's not particularly beloved among the "in-crowd" which includes Norman Finkelstein, Glenn Greenwald, and Richard Falk. (He actually has the temerity to defend Israel!)

If you really believe Axelrod doesn't play the "partisanship-before-truth game," you're playing it right now.

He actually referred to the indictment as "sketchy" in a tweet, but given his partisan nature, that's as close to "bullshit" as we can expect from him. He realizes there is a big risk of blow-back on all Democrats and is likely trying to help put some distance between Dems and the literal and figurative Travis Country drunks.

I can't say I recall any instances where Chait has played or declined to play the game, so I can't comment on his track record.

: not complete or clear

: done quickly without many details

: likely to be bad or dangerous

Chait is a really smart dude. One of the sharpest political writers working presently. Not to be missed.
0 Replies
2
Reply Mon 18 Aug, 2014 09:05 am
@Finn dAbuzz,
Im a DEM and I believe the Dems have sorely picked the wrong battle here. I predict that this whole thing will backfire on the DEMS because there is no "abuse of anything" wherein Perry had made his demands. "resignation or be fired" is an outcome that is always available to the governor's pleasure Im afraid.

Rick iss a total douche bag who usually does himself nicely so why give him something to grasp ? I feel that there is political collusion to support him. The only way for Dems to support him in such a fucked up state as Texas is to purposely offer a really dumb accusation
2 Replies
1
Reply Mon 18 Aug, 2014 11:07 am
@farmerman,
Yup.
0 Replies
1
Reply Wed 20 Aug, 2014 06:47 am
Pretty much waste of fuel and a better chance for the police to fill the pocket..
0 Replies
1
Reply Wed 20 Aug, 2014 08:18 pm
@farmerman,
Then you agree with my prediction.

The Dems think that all they have to do his get his mug shot printed in the paper and he's done for 2016. I'm not a huge fan of Perry and I don't think the Clark Kent look is going to erase the residue of his debate gaffe, but with this, it's way too easy to not only explain away the indictment in a manner which make his opponents look like the ones abusing power, but Perry's supposed victim is a nasty drunk.

It worked with DeLay because he was oily and a nasty piece of partisan work and people could believe that he played fast and loose with campaign finance laws. And while his conviction was overturned, the damage was done. There also wasn't a target for DeLay. Ronnie Earle is a sleazeball who spent more time using his office as a political weapon then fighting crime, and his political aspirations fell through the floor after he left the DA job, but he wasn't the "victim," the "people" arguably were.

Perry on the other hand cuts a much better figure than DeLay, and while he's not hugely popular in Texas, outside of a few sparsely populated blue counties in West Texas, The Valley, and Travis County, Democrats as a whole are very unpopular here. He doesn't have an exaggerated reputation as a bully which is what this current play is all about, but he does have a very large target in Rosemary Lehmberg.

As expected, Perry was ready for his closeup and whatever anyone thinks of him, he's a good looking, photogenic guy.They were never going to get a Nick Nolte mugshot unless they could have pulled him out of bed or a bar at 2:00am, and that was never going to happen. This was all they were ever going to get: 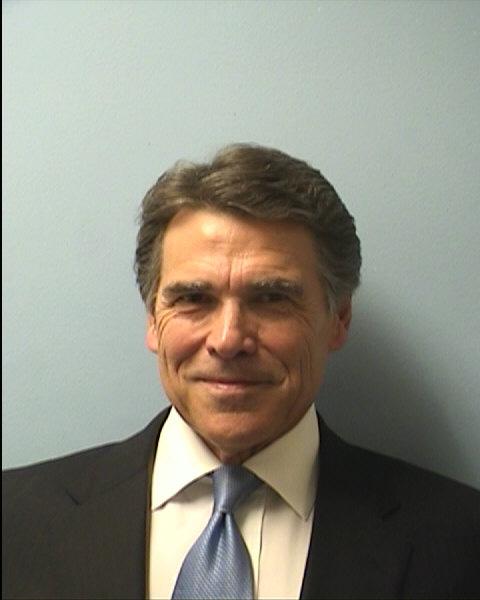 Then you agree with my prediction

yeh.
0 Replies
1
Reply Thu 21 Aug, 2014 06:00 am
What consequences will emerge from this indictment aren't clear. His reputation-rehab tour (complete with the new smart glasses) gets interrupted but now he gets to wave (with justification) the "I'ze been victimitized!" banner which is a fundamental premise and trope of movement conservative rhetoric and ideology.

As to an earlier point, we ought to note that almost nowhere in left media or in mainstream media do we see any support for this indictment. To the names above, add many more like Yglesias, Greg Sargent and Paul Waldman at the Post, add editorials in the Times and the Post. And the criticisms aren't of the "electorally stupid" variety, they speak to the highly questionable legal position and the dangers that arise from politically motivated use of the courts.
0 Replies
1
Reply Thu 21 Aug, 2014 07:07 am
Agreed with your point.
0 Replies