Forums: Immigration, Racism, Children, Illegal Immigration, Illegal
Email this Topic • Print this Page
1
Thu 3 Jul, 2014 04:07 pm
@maxdancona,
Well lets be honest. Those crossing the borders broke the law first. Obama's pandering to illegal immigrant children is what caused this mess. When word spreads that the gringo's are letting everyone stay, the world is going to flood our borders. Obama has been doing this since he took office.

To be honest Max, it is an invasion of our southern border. You are the one using the term "brown people". I'm sure if you asked those people if the felt the same way about any color of person who comes into the US illegally, they will tell you the same thing.

Well lets be honest. Those crossing the borders broke the law first.

Obama's pandering to illegal immigrant children is what caused this mess.

This mess has been around a long time before Obama. The fact that the Tea Party has the Republicans by the balls, and is blocking any immigration fix, is a big part of the problem.

So why isn't the illegal immigration from Canada called an "invasion".

Like I said this is about legal vs. illegal immigration.

That's what they say. When racism was more acceptable people admitted immigration was about race, now they pretend it isn't. 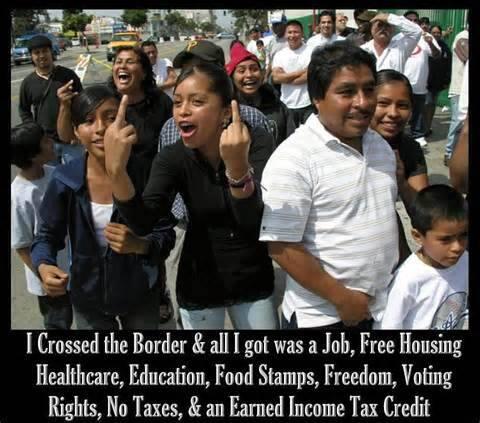 Did you notice the color of the skin of the people in Cold Joint's picture there? Do you think this is a coincidence, or is this an example of racism?

or is this an example of racism?

Do you have a picture of White ungrateful assholes?

Thanks for the best laugh for today.

We are going to you people like you to win where it counts, in the election booth. Every one of these idiot protests with loudmouth conservatives yelling at kids will not only push almost all of Hispanic voters to our side, it will push moderate non-Hispanics as well. No one like angry white yelling people draped in flags.

The message we want to get across is that conservative equals racist. And we can do that pretty easily using the words from the very mouths of people like you. All we have to do then is give the message, Republican equals conservative... and we win.

I guess I am saying thank you, for helping us with both of these things.

The message we want to get across is that conservative equals racist.

And liberal equals race baiter and advocates irresponsibility, something you seem to be proud of. November you can bring it on, but you can kiss the Senate goodbye.
0 Replies
1
Thu 3 Jul, 2014 11:00 pm
Quote:

You would think the UN would concentrate on fixing the problems of persecution in those countries. But the victim mentality and the fact that the West is somehow obligated to help. It isn't.

There’s nothing pleasant about a country enforcing border control; it means turning back desperate people, often to places where they will continue to suffer. However, countries do have the sovereign right and responsibility to regulate their borders. Given the ongoing humanitarian crisis on our own borders, that’s a lesson that the Obama Administration should take to heart as well.

http://www.the-american-interest.com/blog/2014/07/03/australias-immigration-policy-comes-under-fire-from-un/
0 Replies
1
Sat 5 Jul, 2014 11:10 pm
@maxdancona,
It's coincidence. The majority of illegal immigrants who come to this country are from south of the border. They happen to be brown, that is all. If the EU or Canada had hundreds of thousands of their citizens coming into the US illegally and through holes in the fence you would see the same reaction up north. Asian countries also have their fair share of illegal immigrants coming to the US, but once again not in the #'s coming from south of the border.
1 Reply
2
Sun 6 Jul, 2014 07:00 am
@Baldimo,
Of course the fact that these immigrants are brown skin matters. To say it is "coincidence" contradicts 100 years of immigration history.

Until 1965 our immigration policy was explicitly race based. The law was a race-based quota system which included a law that was actually named "The Asian exclusion act". The rhetoric was that America was a Whit country and that we needed to keep America White (and Protestant).

There are prominent Tea Party conservative right now who are saying (in public) that the immigration reform bill of 1965 which removes racial quotas was a mistake.

Since racism became un-cool (in the 1960's) they have tried to hide it. But it doesn't take much intelligence to see that this "legal vs. illegal" thing is a very thing smokescreen. Just listen to the rhetoric...

These people are demanding that the law be broken (which says these kids need to be processed and treated fairly until they get a hearing). That kind of undercuts their message.
2 Replies
1
Sun 6 Jul, 2014 09:20 am
@maxdancona,
Quote:

These people are demanding that the law be broken (which says these kids need to be processed and treated fairly until they get a hearing). That kind of undercuts their message.

And the fact that 95% won't show up for those hearings and nothing will be done about it undercuts your whining.
0 Replies
1
Sun 6 Jul, 2014 09:26 am
@maxdancona,
This is laughable. 100 years of immigration history? We are talking about the mass immigration of 2013-2014 not 100 years ago. We have a president who has stood up for 6 years and made speeches about enforcing his own version of immigration reform. Obama has asked for this and it is happening.

It's funny to want those who are against illegal immigration to follow the law, when the President himself has failed to follow the law on immigration. When you create your own version and that version creates an even worse illegal immigration problem, the people should have a right to protest what is taking place. If Obama had followed the law 6 years ago instead of pushing for the Dream Act, we wouldn't be in this position now. Obama created it and you expect the people to take it. What a tool.
2 Replies
1
Sun 6 Jul, 2014 09:35 am
@Baldimo,
Quote:

Obama created it and you expect the people to take it. What a tool.

He didn't create it. He studied it.

Together, Cloward-Piven developed what has become known as the Cloward-Piven Strategy, outlined in 1966 and calling for the overloading of the U. S. public welfare system in order to precipitate crises that were beyond the ability of government bureaucracies to manage. It would, in other words, cause the collapse of the U. S. government and lead to the creation of a national welfare state paid for through onerous taxation imposed upon working Americans. Cloward-Piven supposed that this could be the result of forcing the Democratic Party (which in 1966 controlled both houses of Congress and the presidency) to federalize all poverty based programs. Now of course, this is very close to what Lyndon Johnson foresaw in his now infamous Great Society scam ... which Americans are still struggling to pay for today. In The Weight of the Poor, Cloward-Piven wrote, “The ultimate objective of this strategy —to wipe out poverty by establishing a guaranteed annual income—will be questioned by some. Because the ideal of individual social and economic mobility has deep roots, even activists seem reluctant to call for national programs to eliminate poverty by the outright redistribution of income.”