American Spring Spotted on It's Way Into Washington!!! 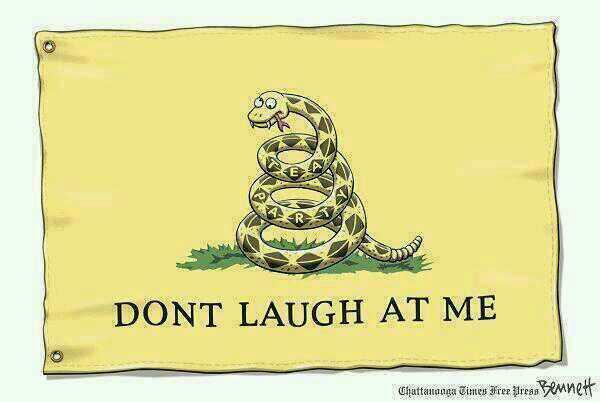 Thanks, edgar
0 Replies
2
Reply Sun 18 May, 2014 09:52 am
@edgarblythe,
Echo Rev, how many people did turn up?
2 Replies
2
Reply Sun 18 May, 2014 10:18 am
@izzythepush,
Only a handful. One was seen on TV shouting, paraphrasing, "Where are you? We gave out notices a month ago."
0 Replies
3
Reply Sun 18 May, 2014 10:46 am
So in case you havenŌĆÖt already heard, the last day of the Obama administration was supposed to be Friday. Well, according to the latest group of bat-****-crazy ŌĆśpatriotsŌĆÖ anyway. Apparently a group of 10-30 Million militia members were set to take over Washington D.C. ready to stage a coup. They called the effort ŌĆ£Operation American Spring.ŌĆØ

Now, interestingly enough, the leader of the movement, retired Army Colonel Harry Riley, actually told his followers that they should not show up in D.C. with their weapons and ammo. He literally gave them all ŌĆ£Rules of EngagementŌĆØ and listed at number one, No Guns, No Ammo. Instead, he told them all to show up with their bibles and constitutions. (Yes, Seriously.) Because when you really want to overthrow the United States government, you can really never underestimate the power of a menacing stink-eye combined with a bible thrust into the air. Duh.


Anyway, shockingly those 30 million patriots didnŌĆÖt quite make it to the capitol Friday. I would say there were more like 30 of them. To tell you the truth, after looking at all of the pictures from the event, IŌĆÖm trying to decide if IŌĆÖm looking at a minuscule turnout in DC for the #OperationAmericanSpringŌĆ”.or just a few old guys who work at Cracker Barrel out for their smoke break.

But even though American Spring was a total bust, something awesome still managed to come out of it. By Friday night, the Liberals had taken to Twitter and made the hashtag ŌĆ£American Spring ExcusesŌĆØ trend, with some hilarious mocking of the flopped coup attempt.
http://samuel-warde.com/2014/05/american-spring-big-flop-twitter-response-brilliant/
0 Replies
2
Reply Sun 18 May, 2014 11:13 am
@ehBeth,
I thought the same thing, been fairly civil of late.
0 Replies
1
Reply Sun 18 May, 2014 11:15 am
@edgarblythe,
They said they were going to come here packing heat. Tell him about the guns and beer!
0 Replies