(CNN) -- Ariel Sharon, whose half century as a military and political leader in Israel was marked with victories and controversies, died Saturday after eight years in a coma, Israeli Army Radio reported. Sharon was 85.
Sharon died at Sheba Medical Center in the Tel Aviv suburb of Tel Hashomer.
The Israeli statesman was a national war hero to many Israelis for his leadership, both in uniform or as a civilian, during every Israeli war.
Many in the Arab world called Sharon "the Butcher of Beirut" after he oversaw Israel's 1982 invasion of Lebanon while serving as defense minister.
He was a major figure in many defining events in the Middle East for decades, including his decision to turn over Gaza and parts of the West Bank to Palestinian control.
Throughout, he was called a "The Bulldozer," a fearless leader who got things done.
The reaction in his own right-wing Likud Party to his order to the military to drag some Israeli settlers from their homes in Gaza led Sharon in November 2005 to form the political party Kadima, Hebrew for "Forward."
He was in his fifth year as prime minister when he suffered a massive stroke in January 2006, which left him comatose.
Ehud Olmert, who became interim prime minister after Sharon's stroke, assumed the role of prime minister after leading the Kadima Party to an election victory in March 2006.
Sharon's career was closely tied to Israel's relationship with Lebanon.
During the Lebanon war in 1982, Sharon, a former army general then serving as Israeli defense minister, was held indirectly responsible by an Israeli inquiry in 1983 for the massacre of hundreds of Palestinians at the Sabra and Shatila refugee camps. He was forced to resign. 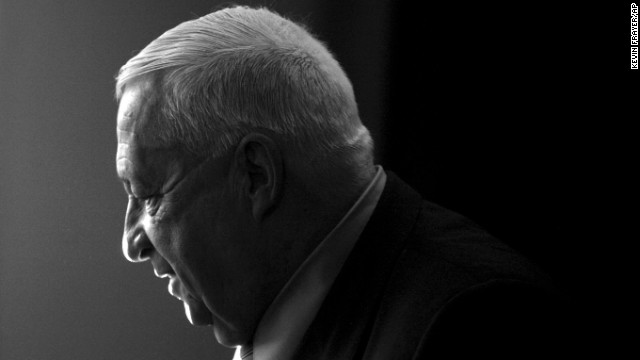 The true legacy of a virulent anti-Arab racist


“Ariel Sharon: Israeli Hawk Who Sought Peace on His Terms, Dies at 85,” read the headline in the January 12 issue of the New York Times. The Washington Post called Sharon “a monumental figure in Israel’s modern history” who “sought to become the architect of a peaceful future,” accompanied by a most kindly and grandfatherly photo. USA Today: “controversial and iconic.” And on and on in all the U.S. corporate media.

Most of the world knows better, and none know better than the Palestinian and Lebanese people, thousands of whom were victims of this bloody, serial war criminal. Sharon’s career was built on massacres–from Qibya in 1953, to Sabra and Shatila in 1982, to Jenin in 2002.