Happy Friday the 13th Everyone!

Forums: History, Sociology, Superstitions, Friday The 13th, Friday The 13
Email this Topic • Print this Page
Reply Fri 13 Sep, 2013 07:55 am
Just stay far away from anyone wearing hockey masks outside of ice arenas.

For you history buffs, a little Friday the 13th context:
Why People Think Friday the 13th Is Unlucky
http://gizmodo.com/why-people-think-friday-the-13th-is-unlucky-1306401570

0 Replies
2
Reply Fri 13 Sep, 2013 02:08 pm
I was walkin' back from the thrift store with a lovely mirror in a gilt frame, when a black cat darted in front of me, so i quickly side-stepped--but unfortunately, that put me under a ladder. When i bumped the ladder, the guy up there dropped his hod of bricks, which hit the mirror and broke it. One of the bricks bounced on the pavement, hitting and killing the black cat. Staggering back from under the ladder, i stepped on three cracks in the sidewalk in succession.

0 Replies
3
Reply Fri 13 Sep, 2013 03:23 pm
@tsarstepan,
I figure what the h*ll you are screwed any way so I went ahead and had a meeting set up with our client - the type where you re-visit prior period work and get yelled at for everything you did wrong (but never noted what you did right).

So I did and I wore black too just to solidify the dire situation. I got to spend over an hour being told stuff we did wrong and how bad our work is. So overall a very productive Friday the 13th. 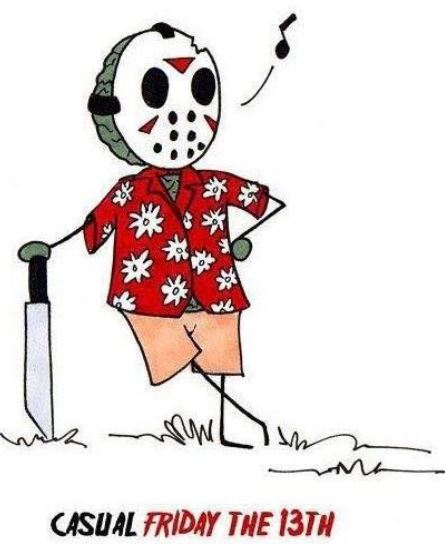