The best musical of all time?

Forums: Movies, Musicals, Music, Films, Musical
Email this Topic • Print this Page
1
Reply Mon 23 Feb, 2009 02:40 pm
@edgarblythe,
Of course "Fiddler"... <slaps head> BRILLIANT!
1 Reply
1
Reply Mon 23 Feb, 2009 07:02 pm
@Izzie,
If you missed it, hopefully they'll repeat it -- American Experience just aired a documentary on Jerome Robbins who created the unbelievable choreography for the Broadway stage and the film. He's the one who convinced Zero Mostel to be the lead. The film in Panavision in a theater is overwhelming in those dance sequences, especially, of course, the wedding. But it looks damn good on my big screen with the full 7 channel surround on.

Hit the schedule button and see if you can catch it.
2 Replies
1
Reply Mon 23 Feb, 2009 07:09 pm
@Lightwizard,
Whooops -- American Masters, not American Experience.

my ex-hub was the Rabbi's Son in an amateur operatic production up in Surrey - heck - 10 years ago or so.... I did make-up backstage and video'd the performance - my favourite scene was "Sunrise Sunset"


edit: An incredibly talented chap! The documentary sounds excellent... hopefully it will get to the UK.
0 Replies
1
Reply Mon 23 Feb, 2009 07:24 pm
Fiddler is indeed a classic with some of the best loved Broadway hits of all time. The story too is compelling and provoking as are the religious themes if one is predisposed that way. I will have to confess, however, that unless very carefully staged and directed, there are places in Fiddler that can become slow and bogged down--the story doesn't flow smoothly pulling you to the next scene--and that might prevent it from ranking the all time best. The modern remake of Phantom of the Opera suffered the same kind of flaw.

For modern musical/opera, however, Evita was very well done.

True story: My sister in law and her lady friend won a trip to a convention in NYC--both small town girls and their first trip to the East or really much out of Texas and surrounding states. So here they were in a big hotel in Manhattan on their one free night and thought it would be fun to see a broadway show. The desk clerk was helpful knowing they would only get tickets to an obscure off broadway production at that late date, but Sis-in-law requested tickets to Fiddler. It was six hours before curtains up and the desk clerk snickered but humored them and began to dial as sister-in-law prayed fervently, "Oh Lord, let us see Fiddler." The desk clerk hung up the phone with a strange look on his face. The theater had just had two cancellations and sis-in-law and her friend got them. You could almost hate somebody with that kind of blind, stupid luck.

1 Reply
1
Reply Mon 23 Feb, 2009 07:35 pm
@Foxfyre,
The first "live" show I ever saw was "They're Playing Our Song" with Tom Conti and Gemma Craven - it was for my birthday when I was kid and my MaMa took me from Devon to the London West End (massive massive treat). 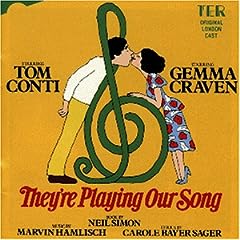 
(apologies to Tom and Gemma - but not the very best musical in the world - but certainly a memory I'll always have) Les Miz is still the greatest for me!

there was also a bomb alert in Harrods (a place that was only ever read about and I was in awe of) - city life was certainly different to country life - FF - bet SIL had the best time!
0 Replies
1
Reply Tue 24 Feb, 2009 05:02 am
@Lightwizard,
Quote:

Ditto on "The Bandwagon," the other best movie musical of all times. It's hard to judge those musicals that were written for the screen, and those adapted from a Broadway show.

Totally agree with you. Adaptations of B'way shows and original musicals are really two separate categories. Something you loved on the stage could well die on the screen; conversely, a so-so play can be gussied up and can make an interesting film.
1 Reply
1
Reply Tue 24 Feb, 2009 07:32 am
@Merry Andrew,
Most of us never have an opportunity to see the show on Broadway and our experience is limited to the movie adaptation or highschool, college, or little theater productions. So we judge the work on the music and story line and how well whatever performers pull us into that.

But I'm sure it is much like the book versus the movie adaptation syndrome. Sometimes the movie captures the flavor and drama or whatever of the book and competently presents it on the big screen. Sometimes not. As you say, I am sure that some Broadway musicals are better represented on the big screen than others.
1 Reply
1
Reply Tue 24 Feb, 2009 07:57 pm
@Foxfyre,
I saw the original Broadway production of "Chicago," and then went to a theater with a friend and my Mom. The inspired excitement in the theater was astonishing. I have never been at a screening of a musical where the audience burst out with applause after the big numbers and the unmistakable utter silence after "Cellophane Man" gave me goose bumps. Just didn't happen with most adaptations. The audience was having honest-to-goodness great fun.
1 Reply
1
Reply Tue 24 Feb, 2009 07:59 pm
@Lightwizard,
"House of Flowers" was not a big hit but I'll never forget it mailing because of Sarah Vaughn's classic recording of "A Sleepin' Bee."

Not to short Barbra Streisand including it on her first album.

I really dont care for musicals, they bore the hell out of me. HOWEVER, I loved "The Producers" the Gener Wilder and Zero Mostel version.


<The Hills are alive with the sound of Muuuuuuuuuuusic> <runs over, grabs some edelweiss.....>


Set, the hamburgers and I just went to see a production of this with blatham's niece in the cast. Some Broadway stars (the original Gaston etc). The stage production was much mmmm stronger than the movie version. Very good, but not as much a show for kiddies.
1 Reply
1
Reply Wed 25 Feb, 2009 01:22 pm
@ehBeth,
Some don't care for musicals on the screen, but if they saw a production on stage like "The Music Man" or "Hello, Dolly," I think they could be converted. I saw the LA productions of both and the staging alone, like the entire final band coming in through the lobby doors in TMM and the train coming on stage in H,D are killers.
1 Reply
1
Reply Wed 25 Feb, 2009 01:38 pm
@Lightwizard,
There are even a few instances where the film versions of musicals are (in my opinion, of course) improvements on the stage versions. West Side Story (my candidate for greatest musical, though oddly enough it's not my actual favorite musical... is that possible?) is a case in point. The movie version changes the order of songs in a manner that, I think, works better. In the stage version, "Officer Krupke" and "Cool" are reversed, for example, which means Riff sings "Cool" at a moment when the Jets don't have anything particularly pressing to cool off over, while "Officer Krupke" has the anticlimactic effect of following up Riff's death with a silly laugher.
0 Replies
1
Reply Wed 25 Feb, 2009 01:40 pm
On the other hand, the lyrics and dialogue of the stage version are much crasser than the film version.
0 Replies
1
Reply Tue 18 Aug, 2009 05:45 pm
I've always liked the Joel Schumacher Phantom of the Opera, although Oklahoma is a close run second.
Ironically, I loathe Carousel ('If I loved you' 'But you don't'. Cue marriage, naturally) but it has, without question, the best song from all musical theatre (what's the use of wond'rin).
1 Reply
1
Reply Tue 18 Aug, 2009 09:21 pm
@blueprince,
You're right that Carousel has the best song in all of musical theater, but it's "If I Loved You," not "What's the Use of Wond'rin'."
2 Replies
1
Reply Wed 19 Aug, 2009 07:51 am
@joefromchicago,
Hard to beat the Carousel Waltz, or "You'll Never Walk Alone" which I always get a rush if a really great vocalist belts it out with ferver. The ring tones on my cell has been the waltz ( well, and the theme from "The Sopranos.") I also have a Rouge music box with the Waltz. I've also wanted to download the overture to "Candide" as a ringtone.
0 Replies
1
Reply Wed 19 Aug, 2009 02:32 pm
"Joseph and the Amazing Technicolor Dream Coat" - I love how each song is in a different genre. The movie version with Donny Osmond is great. I wish I knew the name of the narrator lady though, she was completely fabulous!

"Chicago" (all I've seen is the movie version but I can imagine how Bebe Nuwirth did it on Broadway. I bet she was fantastic!

"Jesus Christ Superstar" - I know every word of the version made in the 60's(?) I recently saw a revised version for Broadway and lvoed the adaptations.

And who cannot love "Annie" ? The begining number where the orphan girls sing and dance..just lovely!
0 Replies