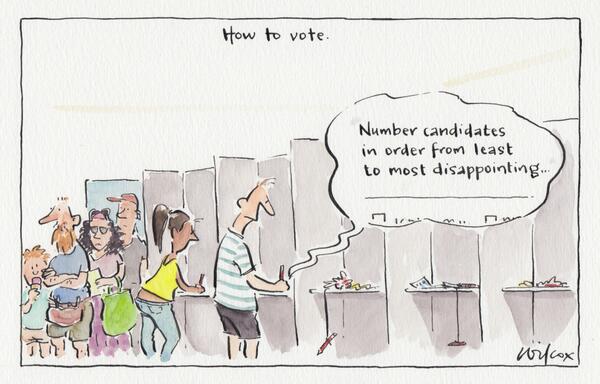 All indications are that the LNP will win in a landslide.

Have already bought my 'I told you so' T-Shirt and started a betting pool on the date of Tony Abbott's first 'Campbell Newman' moment.

Other betting pools in the planning stage:

- Date of first excuse for why the boats haven't stopped.
- Size of budgetary black hole.
- Declaration of mandate for something definitely not mandated.
0 Replies
2
Reply Sun 1 Sep, 2013 06:27 pm
Funny sideline.

Abbott has made a big show of declaring he won't make any deals with minor parties (referring to the deals made by the ALP with the Greens to form a minority govt last election).

While other countries fell into the global recession, Australia maintained strong economic growth, low government debt and a triple-A credit rating. With this record, you might expect the federal election to be focused on how to convert the strength of today's economy into resilience for the future. But instead the political spotlight has fallen on the perceived problem of government debt, with alarming proposals to bring austerity ''down under''.

Most countries would envy Australia's economy. During the global recession, Kevin Rudd's government implemented one of the strongest Keynesian stimulus packages in the world. That package was delivered early, with cash grants that could be spent quickly followed by longer-term investments that buoyed confidence and activity over time. In many other countries, stimulus was too small and arrived too late, after jobs and confidence were already lost.

In Australia the stimulus helped avoid a recession and saved up to 200,000 jobs. And new research shows that stimulus may have also actually reduced government debt over time. Evidence from the crisis suggests that, when the economy is weak, the long-run tax revenue benefits of keeping businesses afloat and people in work can be greater than the short-run expenditure on stimulus measures. That means that a well-targeted fiscal stimulus might actually reduce public debt in the long run.

Australia may have successfully dodged the global crisis, but some politicians seem to have missed the lessons it taught the rest of the world. In this election, the conservative side of politics has foreshadowed substantial cuts to the government budget. This would be a grave mistake, especially now.

Recent experience around the world suggests that austerity can have devastating consequences, and especially so for fragile economies. Government cuts have helped push Britain, Spain and Greece's economies deeper into recession and led to widespread public misery.

The youth unemployment rate in Spain is above 50 per cent and the figure for Greece is above 60 per cent. Their tragic experience should be a warning to the world. But even seemingly healthy Germany was pushed into a recession from which it is just now emerging - but it is an economy that is still weaker than it was before taking the "dose" of austerity.

Proponents of austerity ignore the fact that national debt is only one side of a country's balance sheet. We have to look at assets - investments - as well as liabilities. Cutting back on high-return investments just to reduce the deficit is misguided. If we are concerned with long-run prosperity, then focusing on debt alone is particularly foolish because the higher growth resulting from these public investments will generate more tax revenue and help to improve the long-term fiscal position.

Proposals for substantial budget cuts seem particularly misplaced at this time given that Australia's economy is confronting new global challenges. Commodity prices are softening and growth is slowing in many key export markets. Australia is already facing declining mining investment. The slowdown in economic growth is not the result of flaws in government policy, but of an adverse external environment. It would be a crime to compound these problems with domestic policy mistakes.

Sharp cuts to public spending over the next few years will exacerbate these challenges. Withdrawing government spending as the economy weakens risks tipping Australia into recession and increasing unemployment.
Assuming standard multipliers, cutting public spending by $70 billion from an economy the size of Australia's over a four-year period could reduce GDP growth by around 2 per cent and cost up to 90,000 jobs.

Instead of focusing mindlessly on cuts, Australia should instead seize the opportunity afforded by low global interest rates to make prudent public investments in education, infrastructure and technology that will deliver a high rate of return, stimulate private investment and allow businesses to flourish.

I was in Australia during the last federal election and noticed then that the tone of the economic debate was both far too pessimistic about the current economy and far too complacent about the risks in the future. Three years later, the obsession with public debt continues to be a distraction from the more fundamental question of how to establish sustainable long-run growth.

Rather than look through the rear-view mirror at public debt, this election should look forward to the challenge of maintaining Australia's economic success for the future.

Joseph Stiglitz is a professor of economics at Columbia University and a recipient of the Nobel Prize in economics. 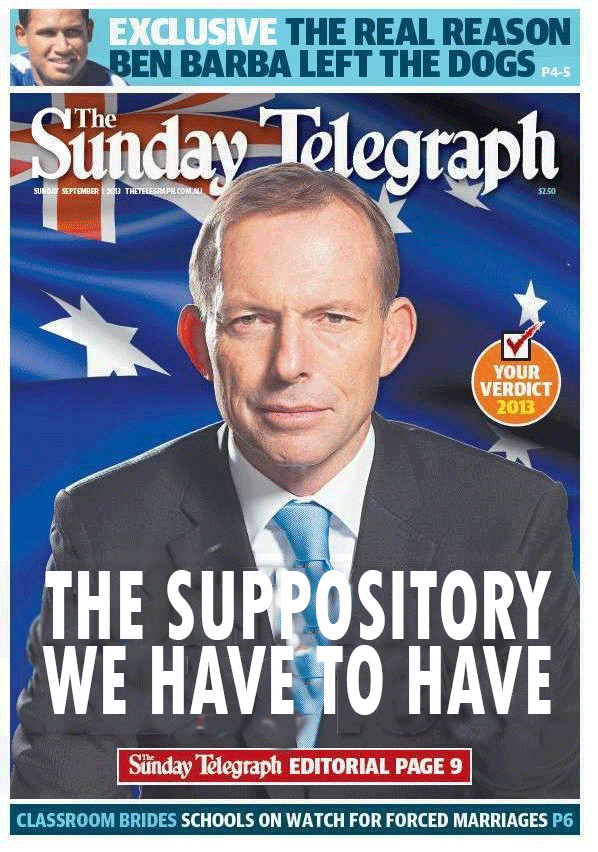 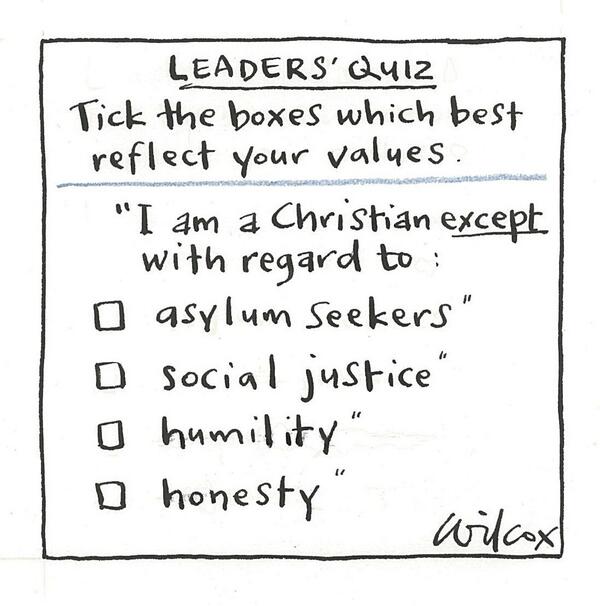 The Australian had bloggers/journo's who would praise Rudd (at the start of the blog) before turning their praise on it's head to say how bad it would be for Australia...and it wasn't just one blogger/journo, but almost every single one of them using this technique - which is why it became so obvious.

The actual result of that mass technique seemed to backfire because it was so see-through (this impression is from the comments section left by readers).

I think they were trying to be careful because of Rudd's popularity in 07.

But it's much more blatant this time.

As a curious thought - if you are a multi-national / mining giant, then there are plenty of ways to fight against govt policy...quite possibly including donations to papers
0 Replies
1
Reply Mon 2 Sep, 2013 06:14 pm : "So some of my Liberal-voting friends (I have more than you’d guess it would seem!) are messaging me to say they don’t like my Facebook posts. To them, I respectfully (and democratically) say this. The world doesn’t have another 10 years to get moving on climate change action.

Every reputable scientist and economist agrees that the next decade is the critical one. If there’s no genuine action in that time (which the scientists and economists all believe begins with some price on carbon), a few things can be guaranteed in the future: rising temperatures and sea levels, coastal erosion, increasing extreme weather events, mass migration, food scarcity.

A vote for the Coalition is quite simply a vote declaring that you really don’t care. No price on carbon emissions, the removal of government climate change authorities, an effective go-slow to the renewable energy industry and an effective halt to Australia becoming a leader on the world stage on an inevitably less fossil-fuel dependent planet. You’re not that fussed.

Add these other things that you’ll be voting for: failure to commit to the last two years and bulk of the funding of the Gonski educational reforms, 20,000 public service cuts, an outmoded and slow NBN, inequitable paid parental leave favouring the wealthy but an end to the Schoolkids Bonus, superannuation law reform that attacks low and middle income earners, possible revival of Work Choices, a PM who is happy to policy launch at a school which publicly states that homosexuality is an “abomination” and who thinks marriage equality is “fashion of the moment”, the most inhumane asylum seeker solution, elimination of Tasmania’s World Heritage listing, an end to legislation governing Marine Parks and moreover, you’re saying you’re not happy with Australia’s current Triple A credit rating, contained inflation, steady economic and business growth (and cash flow boosts and tax deductions to small businesses to follow in the next ALP term), record low interest rates and unemployment figures, an average income rise of 15% (since Labor took office) and the smallest increase in the cost of living of any Australian government in the last 25 years.

Don’t vote for a politician’s personality (they’re all flawed!), don’t vote one way because that’s how your family has always voted. Vote for policies. The ones that matter. Investigate them. Compare them. Do the Compass test to see with which party your views actually accord. Care." Mitchell Butel.

0 Replies
1
Reply Tue 3 Sep, 2013 05:08 pm
If Tony Abbott and Kevin Rudd were both drowning and you only had time to save one, what kind of sandwich would you make?
0 Replies
1
Reply Tue 3 Sep, 2013 05:20 pm
Abbott spruiking about going to a double dissolution if Senate blocks the repeal of the Carbon Tax - saying that the ALP would be committing double suicide if it forced his hand to call for another election next year.

Personally I'm up for that fight. And I don't have kids and intend dying before the planet turns to ****.

Has also hit a legal stumbling block with dismantling the clean energy fund - the Greens have received legal advice that only legislation can dismantle it - so another fight if we have a hostile senate. The CEF killing idea is purely ideological - after the initial investment from the government it is virtually self-funding and killing it saves almost nothing.

Even though the final 'costings' statement by Hockey and Robb was laughable - mainly because for all the talk of a 'budget emergency' they were only saving 0.375% more than Labor over the next 4 years.

The mere repealing of the ALP's FBT changes costs them more than there annual save. Go middle class welfare.

Meanwhile on the lunatic fringe Clive 'Mother fingers' Palmer has accused Murdoch's estranged wife of being a chinese spy (which would make her his ally in his war against the Greens/CIA conspiracy he uncovered earlier in the year). 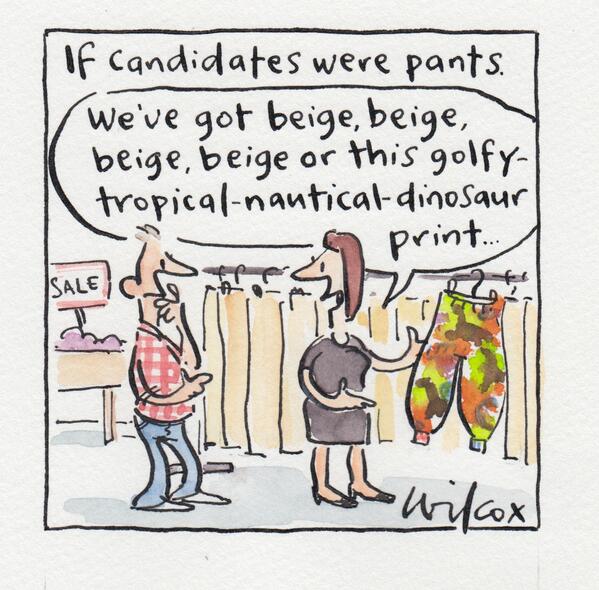 0 Replies
1
Reply Thu 5 Sep, 2013 06:17 pm
My only shining light at this point is my hope that Cathy McGowan, independent, unseats Sophie Mirabella in Indi. That's grasping for straws of happiness.

Go Indie in Indi
0 Replies
1
Reply Thu 5 Sep, 2013 07:28 pm
And I'm still not sure whether the LNP is making internet filtering mandatory.