We can start talking about Labor in power here!:

As much as I hold high hopes for a huge improvement in the quality of the governance of this country, I'm seriously doubting that a computer in every home equals an "education revolution", as Labor would have it.

Sorry to sound like a wet blanket in my first post in this new thread, but Rudd has nominated education as his no 1 priority, so ....

As an educator, I believe that both parties badly missed the boat on education. To my mind, the "education revolution" will begin only when the serious disadvantages some students face in some of our most neglected state schools, especially, are addressed. And that means restoring some of the funds that were removed by the Howard government's push for privatisation of education. It's all about restoring the equality of opportunity, so the poorest students in the currently most under-resourced schools have a decent chance of furthering their education & their prospects in life.

But no doubt Kevin Rudd & Labor felt that acknowledging & addressing this sorry situation would be divisive & could lose votes for Labor in this election .... A real pity & an opportunity missed.:

Prime Minister-elect Kevin Rudd has been given rock star treatment during a visit to a Brisbane school.

Arriving at the school, Mr Rudd was greeted by ecstatically screaming students.

A media conference scheduled for 1.15pm was delayed.

Mr Rudd said implementing the Labor Party's education agenda would be the top priority of his new cabinet.

He told reporters he had instructed the secretary of the Department of Prime Minister and Cabinet, Peter Shergold, to prepare the Labor Party's education policies as the first submission to the new cabinet.

"It is important that we get to work on this straight away," Mr Rudd told reporters.

"Next year there will be a very extensive tendering process on behalf of the various school systems in Australia and therefore it is critical we get that planning work started straight away.

"That will be agenda item number one."

All in caucus ordered to visit a school

Mr Rudd said he had instructed all members of his caucus to visit a government and non-government school in their electorates in the next two days.

He said he expected MPs to discuss with the schools details of the Government's plan to provide computers to every high school student and the introduction of school-based workplace training centres.

"I expect, therefore, that, when our parliamentary party meets in Canberra on Thursday, we will also nominate on the agenda for that meeting a discussion and debate on the implementation of these programs," Mr Rudd said.

"And I will expect members of the party to report back on what they've found in their communities."

Mr Rudd said parliamentary experience would play a role in his selection of cabinet ministers.

"When it comes to selecting a frontbench team, that parliamentary experience is very, very important,'' Mr Rudd said. "My view on that has not changed.'' ...<cont>

About bloody time we said "sorry"!:

Prime Minister-elect Kevin Rudd says his government will make a formal apology to indigenous Australians early in its first term.

"It will be early in the parliamentary term," Mr Rudd told reporters in Brisbane.

"We will frame it in a consultative fashion with communities and that may take some time."

"It's certainly Labor policy, obviously we haven't made an announcement about timing and that's a matter for Kevin to deal with," she told ABC radio today.

"It's certainly long-standing Labor policy and I absolutely support it.

"And I also absolutely support us taking the practical measures that would make a difference to the huge life expectancy gap and the lack of opportunity that so many indigenous Australians face in their lives." ...<cont>

Former ministers Brendan Nelson, Tony Abbott and Malcolm Turnbull have all put their names forward and a spokesman for Julie Bishop says she is still considering her options.

But this man has ruled himself out: 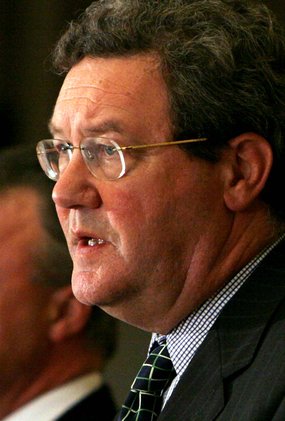 "My reaction to that was that I didn't have enthusiasm for such a position," he said.

"Secondly, when I mentioned it to my family, I have to be honest with you they were filled with horror."

Folks in the USA are on the edge of their seats.

(This is John Howard's seat!):

Maxine McKew has declared that Bennelong is a Labor seat for the first time, in a press conference outside her campaign headquarters at Eastwood at midday.

Ms McKew, who is 2500 votes ahead in the seat, declared: "The people of Bennelong have spoken for change.

"This is now a Labor seat for the first time," she said.

"We feel we are comfortably ahead with a swing in every booth but one."

But she said she was stopping short of officially declaring the seat hers.

As of 12.30pm today, she was leading Mr Howard with 51.66 per cent of the vote on a two-party preferred basis.

She required a 4.13 per cent two-party preferred swing to win the seat but had achieved a swing of 5.79 per cent away from Mr Howard.

Ms McKew said she had targeted conservative voters in the campaign for Bennelong but denied she had won the seat on the back of a growing Asian vote.

"My strategy was to go after Liberal voters - not Chinese, Korean, Italian or Armenian. I want to clear that up before we get an urban myth about Chinese and Korean voters."

The victory was also a win for grassroots campaigning over the "buckets of money" Mr Howard and the Liberal Party had pumped into the seat, she said.

"Mr Howard and the Liberal Party spent $20 million in the campaign for Bennelong ... all we promised was a child-care centre." ...<cont>

Yikes, I've misspelt the title of this thread.

It's meant to say Rudd's Labor! (& it's taken me years to get into the habit of spelling it the wrong way!)

I wonder if Maxine has more than just window dressing to offer.

Will there be a carbon tax? Which industries will be targeted. In Europe, carbon credits were very generous. Much more generous than most people thought they would be.
0 Replies
1
Reply Mon 26 Nov, 2007 06:54 am
In relation to Barnaby Joyce, he isn't a leader - he's almost an independant. I rather like how he speaks his mind, but as he wouldn't conform to party policy, that would cause problems.

No idea who the liberals will elect. At a guess Brendon Nelson, even if I know next to nothing about him. I can't see them electing Abbott, because that would be a little to close to electing another Latham.
0 Replies
1
Reply Mon 26 Nov, 2007 02:52 pm
msolga wrote:

Yikes, I've misspelt the title of this thread.

It's meant to say Rudd's Labor! (& it's taken me years to get into the habit of spelling it the wrong way!)

I'll have to ask the moderators to change it, I guess.

It might be an appropriate spelling msolga. The thread will be about Rudd's work ... labour ... so perhaps your mind was on that track ...

In relation to Barnaby Joyce, he isn't a leader - he's almost an independant. I rather like how he speaks his mind, but as he wouldn't conform to party policy, that would cause problems.

Actually if you follow Barnaby Choice's outbursts you will note that he always tows the party line after he's got his 15 minutes of media (eg Workchoices, full sale of Telstra). Not a fan. But in practical terms - he's a senator and the leaders are always from the lower house (not sure why that is - back to Oz politics 101).
0 Replies
1
Reply Mon 26 Nov, 2007 04:29 pm
Bungie's right about Abbott - I was amazed that he put himself forward - talk about ambition blinding you to your public persona.

Paul Keating has said the libs should go for Julie Bishop!

If the libs go for Turnbull it will move them left - so if you think there's overlap now between the main parties think how crowded it will be then.

Nelson's a tw*t. Chris Pyne is a parody of himself. I predict internecine squabbles for a couple of terms, with Andrew Bolt to win the by-election for Higgins and go onto lead the party into the same road as the Democrats and the DLP.

Heeheheehehehehheehehheehheeheh!
0 Replies
1
Reply Mon 26 Nov, 2007 04:32 pm
Oh yeah - The spelling is a neat bit of synchronicity. I only hope Rudd's Labor labour doesn't lead him down the Blair path.

But early signs are more promising than I'd hoped. My aim was to get rid of Howard - and thus avoid migrating to a country I had more respect for. Mission accomplished.
0 Replies
2
Reply Mon 26 Nov, 2007 05:40 pm
For anyone who is as ignorant as me about Australian politics and would like to learn more about it than the standard post-election write-up in your US or European newspaper offers, this is a great in-depth feature. Focuses a lot, in particular, on how Rudd changed the Labor party, or is likely to change it still.

Didnt make me very hopeful...
1 Reply
1
Reply Mon 26 Nov, 2007 05:44 pm
In England, ueber-Blairite Alan Milburn, who was so impopular that he never even entered the leadership contest after Blair stood down, is sternly referring Gordon Brown and Labour to the Australian example now:

He doesnt say anything of substance really. It's just a shot across the bow to say that Labour can only win if it goes down the Blairite New Labour path of being as conservative as the conservatives.
0 Replies