Forums: History, European History, World War One
Email this Topic • Print this Page
Reply Wed 31 Mar, 2004 03:12 pm
The "Declaration between the United Kingdom and France Respecting Egypt and Morocco [Together with the Secret Articles Signed at the Same Time]", better known as "The Entente Cordiale Between England and France" was signed 100 years ago, on April 8, 1904. 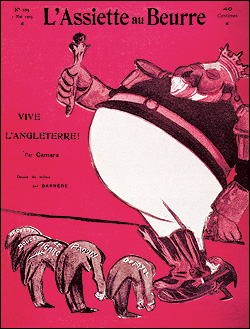 Short background:
In 1882 Germany, Austria-Hungary and Italy formed the Triple Alliance. The three countries agreed to support each other if attacked by either France or Russia.

France felt threatened by this alliance. Britain was also concerned by the growth in the German Navy and therefore the two countries signed the Entente Cordiale (friendly understanding).

Link to the complete treaty (from Avalon project) HERE


By the Entente Cordiale both powers reduced the virtual isolation into which they had withdrawn - France involuntarily, Great Britain complacently - while they had eyed each other over African affairs:
Great Britain had had no ally but Japan (1902), useless if war should break out in European waters; France had had none but Russia, soon to be discredited in the Russo-Japanese War of 1904-05. The agreement was consequently upsetting to Germany, whose policy had long been to rely on Franco-British antagonism. A German attempt to check the French in Morocco in 1905 (the Tangier Incident, or First Moroccan Crisis), and thus upset theEntente, served only to strengthen it. Military discussions between the French and the British general staffs were soon initiated. Franco-British solidarity was confirmed at the Algeciras Conference (1906) and reconfirmed in the Second Moroccan Crisis (1911).
[text, slightly edited, adapted from the Britannica]

Can this Entente be called "the pre-start of WWI"?

I'm not sure what you mean by "pre-start," Walter. If you're suggesting that the Entente Cordiale was one of the pre-conditions of the war, I suppose that would be correct, but only in a limited way. It was a pre-condition for the war as it actually happened: in other words, the Entente made it almost certain that, in any continental war, Britain would take the side of France.

On the other hand, if you're suggesting that the Entente, in some way, caused the war, then I'd have to disagree. At most, it further restricted the range of choices available to European diplomats and leaders in the years leading up to the war, and this, in turn, made it more difficult to find compromise solutions to crises, as the July Crisis eventually demonstrated.

But it was creating two strong new oppostional blocs of countries.

(And I'm still surprised - although I know a bit of the background :wink: - that France and Britain started to stand site on site ... in peace time.)

Well, it wasn't quite the "diplomatic revolution" that happened in 1756, when France and Austria discarded centuries of bitter dynastic rivalry to form an alliance, but it was something of a surprise -- not because France and Britain could cooperate (they were allies during the Crimean War), but because Britain maintained an isolationist foreign policy during most of the nineteenth century with regard to continental Europe. Although this "splendid isolationism" was not (contrary to what the British liked to think) a traditional foreign policy, it was firmly entrenched in the British mindset up until the first decade of the twentieth century. Indeed, the Entente Cordiale was less surprising than the Franco-Russian Alliance, which paired the aggressively republican French with the regressively autocratic Russians, and the Triple Alliance, which forced Austria-Hungary and Italy into an uneasy partnership.
0 Replies