April 4 will mark the 45th year since the assassination of Dr. Martin Luther King

April 4 will mark the 45th year since the assassination of Dr. Martin Luther King at the Lorraine Motel in Memphis. Dr. King, 39, at the time, has now been gone from us longer than he was with us. A monument celebrates his life on the mall in Washington. He is remembered as the man with a dream at the March on Washington.

In 1968, however, Dr. King was far from the favored celebrity he is today. He was under fierce criticism for opposing the war in Vietnam. Former colleagues were scorning his commitment to nonviolence. When he went to Memphis, headlines called him “Chicken a la King.” The St. Louis Globe-Democrat termed him “one of the most menacing men in America today.” The FBI was planning COINTELPRO operations to spread rumors about him and discredit him.

The civil rights movement had succeeded in ending legal segregation. The Voting Rights Act had been passed. But Dr. King knew that his greatest challenges were still ahead as he turned his focus to poverty and equal opportunity. The war on poverty was being lost in the jungles of Vietnam as war consumed the resources needed.

Dr. King went to Memphis to support African-American sanitation workers who were striking for equal pay and for a union. His first nonviolent march there was disrupted when some of the marchers started breaking into and looting stores. King decided to return to Memphis because he believed that nonviolence was now on trial.

Dr. King decried the unemployment that was so crippling to the black community. But he also knew, even then, that a job no longer guaranteed a way out of poverty. “Most of the poverty-stricken people of America,” he said, “are persons who are working every day and they end up getting part-time wages for full-time work.”

So Dr. King went to Memphis to march with sanitation workers — and there his life was taken from him.

Now, 45 years later, his last mission is still unfulfilled. One in five children in America are at risk of going without adequate nutrition. One in three African-American children. Forty-six million Americans are in poverty. More than 20 million people are in need of full-time work. African-American unemployment remains twice the rate of whites.

Dr. King knew that these conditions would not change unless working people and the poor joined across lines of race and religion and region to demand justice. Nothing would change unless people disrupted business as usual, with nonviolent protest, expressing their own humanity while exposing the inhumanity of the current arrangements.

On April 4, many will remember Dr. King. The news programs will rebroadcast parts of his sermon the night before he was shot when he promised those gathered that they would “get to the promised land” although “I might not get there with you.”

The way to remember Dr. King is to pick up the struggle. Poverty and inequality, he taught us, are a threat to democracy and to freedom. And only nonviolent engagement by people of good conscience joining with those who are afflicted can possibly drive the change we need.

Today, inequality has reached even greater extremes. Wages are sinking, poverty is spreading. In this rich nation, poor children go hungry. The Poor People’s Campaign that was lost in the wake of war and the assassinations of Martin Luther King and Robert Kennedy is needed now more than ever.

Type: Discussion • Score: 1 • Views: 1,252 • Replies: 17
2
Reply Mon 1 Apr, 2013 09:25 pm
@edgarblythe,
I remember the day--I was going to school outside of Nashville and my roommate and I were at dinner with my parents who had come down to celebrate my 18th birthday. My roommate was from Memphis. I shall always remember Jim's words when it was announced over the din of the crowded café that Dr. King was dead.

"I hope my city doesn't burn."

Memphis didn't burn that summer--but many others did. I don't think that is what Dr. King would have wanted.

Rap
0 Replies
2
Reply Tue 2 Apr, 2013 04:50 am
Martin was a very popular man, when perceived by the powers that be to be after civil rights. When they discovered that he wanted justice for the working poor and that he opposed the Vietnam War, his press coverage became negative. They felt they could not allow him to go beyond the scope of what he had already accomplished.
0 Replies
3
Reply Tue 2 Apr, 2013 03:34 pm
http://www.kinginstitute.info/
This Martin Luther King dedicated encyclopedia is a treasure trove of information. I did not know of it before this week.
1 Reply
2
Reply Tue 2 Apr, 2013 03:52 pm
@edgarblythe,
Thank you for that link, edgar.

I, too, remember that day in 1968 when they shot poor Martin dead. But I also remember standing in that monstrous crowd by the side of the Reflecting Pool in Washington, during the March on Washington, when he stood on the steps of the Lincoln Memorial and made that "I have a dream" speech. It is vividly etched in my memory, as is the "warm-up" speech made by Josephine Baker before Martin took the podium.

Afterwards, my wife, my as yet unborn son and I drove back to Baltimore where we were staying with an old college friend and his wife. Getting out of the car, we were approached by a somewhat belligerent looking black man who said, "You all marched in Washington today?"

I said, "Marched? We strutted."
0 Replies
1
Reply Tue 2 Apr, 2013 03:57 pm
I did not get to the east coast for another five years. I was in NYC the day he was killed. I lived among indifferent, uninformed sorts and life went on in that part of Brooklyn.
1 Reply
1
Reply Tue 2 Apr, 2013 05:21 pm
@edgarblythe,
The night he was killed I had been drinking with some friends in Boston. We were sort of bar-hopping. As we all walked into a bar called The Sevens on Beacon Hill, one of the bus-boys ran over and said, "Did you hear about Martin Luther King getting shot?" For some reason, in my less than sober state, I thought this bus-boy was going to make a racist joke and that this was the lead-in. "That's not funny," I yelled at him. It took a minute to convince us that it had just been announced on TV that King was dead. 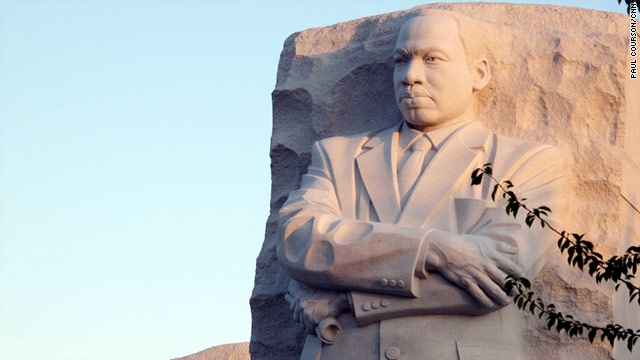 That's a terrible picture, edgar. I think MLK's hand is covering my face, standing on the edge of the Reflecting Pool there.