Armstrong to be Stripped of all 7 Titles 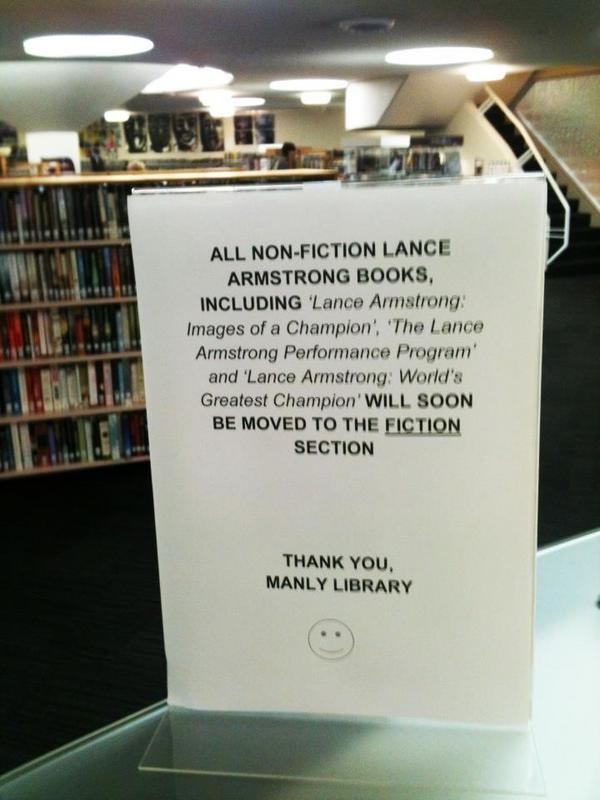 Australian AND a Librarian. Potent mix.

looks like one librarian is a bit over full of himself, and the capital L is not the only indicator.

I dont like it when American pharmacists refuse to dispense drugs that they dont agree with either.
1 Reply
4
Reply Sun 20 Jan, 2013 11:58 pm
@hawkeye10,
Quote:

a bit over full of himself

Well I bow to your analysis, I certainly consider you to be expert on self-fascination.

AIS professor triggered red alert on Armstrong blood cells
Source
Date October 12, 2012
Michael Cowley
IT WAS the work of Australian Institute of Sport head of physiology Professor Christopher Gore that determined the chances of Lance Armstrong being clean in the 2009 and 2010 Tour de France races.

According to the USADA report on Armstrong, a cluster of five Armstrong samples taken during the 2009 Tour and his two samples during the 2010 event contained an unusually low percentage of reticulocytes, or immature red blood cells that are created naturally by the body. When an athlete adds additional red blood cells to his circulation by transfusing his own stored blood, the body's production of reticulocytes is suppressed.

Professor Gore was unavailable for comment yesterday, but AIS director Matt Favier had nothing but praise for his work.

"Professor Gore has worked at the Australian Institute of Sport for more than 20 years and is the head of the department of physiology. Professor Gore earned his PhD in 1989 and has published over 130 papers,'' Favier said. ''He has two professorships and is well positioned as an internationally recognised expert.

"Given his expertise and impeccable credentials, Professor Gore has provided an evidence-based opinion on perturbation in various factors found in the blood of athletes in several anti-doping cases.

"Professor Gore was also a key researcher in work prior to the Sydney Olympic Games that provided the basis for the current process that identifies abnormal levels of markers in an athlete's bloodstream. Moreover, the basic model of the so called 'athlete blood passport' now used by WADA and USADA is built on the foundation of that 1999-2000 research project, which was funded by the IOC.''

Australia has several links to Armstrong. He made his racing comeback in January 2009 at the Tour Down Under in Adelaide, and then last year, he raced professionally for the final time in the same event.

Tour Down Under race director Michael Turtur was unable to comment on the USADA findings yesterday as, in his role as vice-president with the International Cycling Union, he cannot comment until the union has officially released its statement on the matter.

A convincing 39 seconds, then back to the old Lance Armstrong
Source
The writer who memorably confronted Armstrong about doping in 2009, says watching the Oprah interviews left him laughing
Paul Kimmage
The Observer, Saturday 19 January 2013 21.59 GMT

The saddest story I've ever heard about sport was told to me in November 2010 by a man who cheated to win the Tour de France. We were sitting not in the plush surrounds of a five-star hotel in Texas, but in a sparsely furnished cabin in the San Jacinto mountains. Floyd Landis's old racing bike was standing just inside the doorway; his underwear was drying on a clotheshorse; the cupboards were bare, the carpet was worn; it had been a while since President Bush had called.

Darkness was falling on the mountain. Five hours had passed since he had begun telling his story and had covered most of the bases: his boyhood as a Mennonite, his doping apprenticeship with Lance Armstrong, his Tour de France win in July 2006 and the 12 months he spent lying after he tested positive. We have now reached the moment he knew the lying would have to stop.

It's 20 September 2007. He has just set off on a training ride from his home in San Diego when he receives a call from his lawyer, Maurice Suh. After a costly and protracted legal battle with the United States Anti-Doping Agency, the ruling on his positive test is about to be announced. "We should know in the next hour," the lawyer says.

Landis returns home immediately and waits in the garage. His wife, Amber, is sitting inside but he needs to be alone. The case has placed a desperate strain on their marriage. Every penny of their savings is riding on this call. Win, and the good times roll again. Lose, and they face ruin. Twenty minutes pass before the lawyer delivers the verdict. "We lost," he says.

Amber cries when she hears the news but Floyd burns with anger. He races upstairs to the living room and takes the most coveted prize in cycling – a beautiful porcelain bowl presented to the winner of Tour de France – from a cabinet. Amber knows what he's thinking and follows him up the stairs but he has already raised it over his head when she comes through the door.

He smashes it to the floor.

"I had walked by that thing a hundred times [that year], and every single time I wanted to smash it," Landis explained. "It had made me into something that I wasn't. It represented a turning point in my life where I had to lie."

Lance Armstrong reached that turning point in 1999 but he's not living in a shed in the San Jacinto mountains, and he hasn't broken any porcelain yet. For the first 39 seconds of his interview with Oprah Winfrey, he was utterly convincing …

Winfrey: "Did you ever take banned substances to enhance your cycling performance?"

Winfrey: "Was one of those banned substances EPO?"

Winfrey: "Did you ever blood-dope or use blood transfusions to enhance your cycling performance?"

Winfrey: "Did you ever use other banned substances, such as testosterone, cortisone or human growth hormone?"

Winfrey: "In all seven of your Tour de France victories, did you ever take banned blood substances or blood dope?"

And then it was back to telling jokes.

"Michele Ferrari is a good man."

"I care a lot about Christian [Vande Velde]."

"I'm not going to lie to you or the public."

"I think I deserve it [to compete again]."

"When I was diagnosed [with cancer in 1996] I was a better human being after that."

Or my favourite, hilarious: "The last time I crossed that line [doping] was 2005."

Armstrong has always shown a talent for pulling rabbits out of hats, but this was magic. He did not dope during his comeback in 2009 and 2010. Why not? Why would a guy who had doped with impunity, who didn't even regard it as cheating, suddenly decide he was going to do it clean? Wait, he explains it…

Because Kristin, his ex-wife, "believes in honesty and integrity and the truth" and asked him "never to cross that line again." And "I never would have betrayed that with her"?

Is this the same guy who dumped his wife for Sheryl Crow? Is this the same Kristin who, according to witness statements given to Usada, wrapped tablets in tin foil for Armstrong at the World Championships in Valkenberg? Who told a team-mate, Jonathan Vaughters, they kept EPO in the fridge? Who watched her husband vilify Betsy Andreu and did nothing?

But the best act came last.

"It's an epic story," Winfrey said. "What's the moral to the story?"

But moral (adj: 1 concerned with the principles of right and wrong behaviour) is not a word he has ever looked up. "I don't have a great answer there," he replied, and started faffing.

"Yeah," he replied. "She continues to tell me that."

Cue piano music and the credits.

In the autumn of 1993, Greg LeMond and his wife, Kathy, were sitting at home in the suburbs of Minneapolis, when they received a visit from Linda Mooneyham, the three-times Tour de France winner has recalled. Her 21-year-old son, Lance Armstrong, had just become the world champion and she had travelled from her home in Texas for advice.

"Well, let him find an agent – a good one with an attorney," LeMond replied. "And one word of advice – just be his mom."

They sat on the porch for a while and then moved inside to the kitchen. Linda had something else on her mind: "How do I make him less of an asshole. He doesn't care about anyone."

Lance Armstrong has questioned the validity of cycling's inquiry into doping and complained that he had "experienced massive personal loss... while others have truly capitalised on this story".

"Do I think that this process has been good for cycling?" he said in a BBC interview. "No. I don't think our sport has been served well by going back 15 years.

"I don't think that any sport, or any political scenario, is well served going back 15 years. And if you go back 15 years, you might as well go back 30."

However, the disgraced former seven-times Tour de France winner said he would testify with "100% transparency and honesty" at any future inquiry after the new president of the UCI, Brian Cookson, announced an independent commission to get to the bottom of drug use in the sport.

2 Replies
2
Reply Mon 11 Nov, 2013 02:31 pm
@Walter Hinteler,
I haven't seen any widespread forgiveness of Armstrong in the public mind. I wondered how history would look back on him. Not well is my verdict.

Straight away I thought 'transparent'; that'd be like even thinner than 'paper-thin' honesty.
1 Reply
1
Reply Tue 12 Nov, 2013 05:13 am
@hingehead,
Legislation regarding performance enhancing substances is a licence to print money for people who never do anything beyond sitting on their arse and spout indignant mantras.

A day before Lance Armstrong was scheduled to give sworn testimony about his use of performance-enhancing drugs he reached a settlement on Wednesday with an insurance company that was seeking $3m in performance bonuses it paid him from 1999 to 2001.

Nebraska-based Acceptance Insurance sued Armstrong in Texas earlier this year after he admitted he doped during a career in which he won the Tour de France seven times.

Acceptance's attorney, Mark Kincaid, and Armstrong's lawyer, Tim Herman, declined to disclose details of the settlement but both said the case was "resolved to the mutual satisfaction of the parties".

The settlement means Armstrong will not need to show up for a Thursday deposition in Austin, where he was expected to be asked to detail drug use throughout his career. Although Armstrong has acknowledged drug use in interviews with Oprah Winfrey and other media, he has yet to provide sworn testimony.

1 Reply
1
Reply Sat 30 Nov, 2013 04:40 am
@Romeo Fabulini,
No maybe about it Romeo. If Nigella can do it with Class A drugs then a guy who won 7 Tours should be able to. Pratting about in a mock kitchen as high as a kite producing multi-coloured shite is a damn sight easier than Mr Armstrong's feat.

I think those who pillory Mr Armstong are looking for a victim to pillory.

He cheated the public and all the other competitors who were trying to do it clean. Even if those are few enough in the world of cycling. And lied consistently for years while collecting plaudits. honours and money.

Nigella relied on being as high as a kite in order to produce her provocative performances. She's a nice Jewish girl when she comes down which might be why she seems to have avoided ever coming down.

And as for evolutionists what can anybody say? What possible objection can a scientific evolutionist offer to Mr Armstrong's actions?

Your prose, Mac, is enhanced by you drinking tea and coffee. As a water drinker it would be unreadable. Anthony Burgess used six tea bags per cup and a lot of cups. I tried it once.

You should read what some of those famous French artists used in the late 19th century. That makes Mr Armstrong look like he was on rusks.
1 Reply
2
Reply Sat 30 Nov, 2013 06:44 am
@spendius,

I do all my stuff pie-eyed on absinthe, but it's not illegal and I don't lie about it.
1 Reply