Forums: Aging, Elder Care, Mental Decline, Dementia, Hereditary Dementia
Email this Topic • Print this Page
1
Reply Fri 11 Mar, 2011 12:19 pm
@Diane,
That is exactly the point. When someone is in a situation as you describe, it is like being on a tightrope. You never know what is going to happen next.

The thing is, it probably won't get better, just different. I would suppose that the only thing that can be reasonably done is for the caregiver to let a lot of the distress to go over his/her head.

In my group, one of the participants bemoaned the fact that her husband was behaving so peculiarly. After discussing it, the group realized that what was happening to her husband was on account of the disease, and not the person himself. After awhile she was able to accept that concept, and she was able to deal with the situation more dispassionately.
0 Replies
3
Reply Sat 12 Mar, 2011 10:38 am
@High Seas,
High Seas, I just reread your post. How true.

It's the uncertainty that can drive an already crazy person "crazy." I was reading an article about death rates for some other thread and the people who die young include a large number of scizophrenics. That's one things about the uncertainty of mental illness in particular, one begins to wonder if this will continue to plague one's life more than the good time last. Some decide that is isn't worth it to keep trying to be "normal."

That really makes it difficult for caregivers I will never forget what Clary Sage went through with her husband.

What I wrote isn't related to dys, it just emphasizes how desparate our lives can become when we not only love but fear for our loved ones.

High Seas, I just reread your post. How true.

It's the uncertainty that can drive an already crazy person "crazy." ..


Since you know my current location, and my concern for you preventing me from replying online sooner, you will understand - I'm sure - why I decided not to bother with the useless pests, even if they should write something negative about you: life is too brief, and too precious, to worry about minor things!

You almost, but not quite, captured the essence of the problem in your post, but remember: uncertainty itself is woven into the fabric of our universe and should be welcomed whenever we come across it - it means we're still alive and conscious. The mathematical definition of hell is complete determinism.

So, what you got unerringly is this: the uncertainty isn't the problem, the fear of it is. That extends to this "social stigma" attached to "mental illness". Btw, thought about the subject of irrational fear last week as well because of a thread on this site; link to it refers to swimming pools but >

http://able2know.org/topic/89445-464#post-4534242
> that's irrelevant. Any fear has to be named and/or quantified if you're to have any hope of ever overcoming it. Some things are irreversible - others aren't; you alone can determine with clarity which category the fear falls into, whether it should be fought, and how - or surrendered to. Love


very wise words.
0 Replies
3
Reply Mon 14 Mar, 2011 02:49 pm
@High Seas,
I can understand ordinary fright on that, mine for example. I had to be talked to by the swimming teacher to dive the first time into a 12 foot deep pool from the board at some low height, relative to what I've seen since on the olympics. On the other hand, I was as a child privy to tales by an original deep sea diver, Col. John Craig, and if I have any sense I know I won't just zoom backwards down into the hole, given I don't even wear flippers.

The deal is, does sense win out as one talks with oneself, and if it wins, was it right? Fear is a wondrous thing. I said this somewhere else on a2k recently, that my ex-the-writer took it as the primary motivator, at least for a while as I don't know what he thinks about that now. Fear can be protective and sensible, or obscure possible paths, what with all the adrenalin.

I can understand ordinary fright on that, mine for example. I had to be talked to by the swimming teacher to dive the first time into a 12 foot deep pool from the board at some low height.... if I have any sense I know I won't just zoom backwards down into the hole, given I don't even wear flippers.


The second part is easy (for me) to understand, you may worry about sharks, running out of oxygen, other scuba dangers - well, sharks wouldn't apply in the swimming pool, but they would in the ocean: this pic from Belize blue hole: 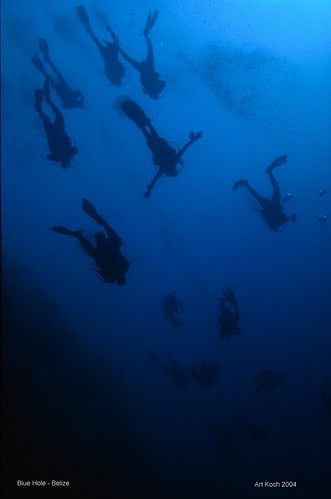 You should put into words the light in which you see something before it vanishes from your mind.

Matsuo Bashō
0 Replies
2
Reply Sun 20 Mar, 2011 01:33 pm
Phoenix, it has been about three weeks since I stated on the new medication. I feel like myself again, like the woman Dys fell in love with eight years ago. Now I can't imagine how hard it must have been on him.

High Seas, that quote is so very beautiful and wise.

To all, I have a question.

My mom is not very old (early 60's) but has had a series of health setbacks and is now talking about not expecting to live more than another decade or so. (I don't think she has any way to know that really, the setbacks are unpleasant but not life-threatening. It seems to be more that she is now feeling "old.")

At any rate, I read this article in the New York Times and became convinced she should get long-term care insurance. This passage, particularly:

With that in mind, Ms. Overman’s advice for Ms. Sturm started with getting long-term care insurance for herself. “In my opinion it’s essential. You can break a hip and long-term care will take care of you when medical coverage does not — same with stroke.”

Ms. Overman said all older people should consider such coverage, even married couples with children. “I have had women tell me, ‘My kids will take care of me.’ Only to have them call me a year and a half later saying that their kids are losing their jobs because they’re taking care of me!”

But long-term care insurance can be expensive. Can Ms. Sturm, who makes less than $70,000 a year, manage that? And does it make sense?

“It is expensive but not having it is also expensive,” Ms. Overman said. She estimated that such coverage for Ms. Sturm would cost about $1,900 a year. “I bet you she’s paying that much in car insurance.”

My mom was emphatic about it being a bad idea. She works in the health care field so I don't discount what she has to say out of hand, but emphatic is kind of her default mode and I want to learn more. (For example, when I used to talk to her about her retirement plans, especially financial planning, she was emphatic that she'd be working into her 80's so she didn't have to worry about saving up a lot. She's now talking about retiring at 66.)

She currently is pulling in a good salary so she should be able to afford the long-term care insurance.

She is emphatic about not wanting to go into assisted living -- she'd rather be dead, she says.

At first she was saying that the insurance applied only to assisted living, then I brought up "what about home care?" and she allowed that it covers that, but home care is "a crapshoot." OK.

I'm worried she's just not being realistic about preparing for any real decline in her health. She hopes she'll just kind of keel over without any long drawn-out anything, and I understand that, but I also want to be sure that while she's still in the workplace and still earning good money, she keeps her options open IF things do go south for her.

So, I'm asking here -- what do you know about long-term care insurance? Do you recommend it? Why or why not?

Thanks.
1 Reply
1
Reply Wed 13 Apr, 2011 10:33 am
@sozobe,
I have it; Mr B does not, but I'm five years older than he is. I have a long history of stroke in my family and the idea of stroke recovery/rehab made it very possible that I'd need some long term care. Like life insurance, the older you are when you purchase the coverage the higher the premiums.

Dunno - it's like most insurance I guess. Money for coverage you will never use, but peace of mind and potentially life saving if you need it.
1 Reply
1
Reply Wed 13 Apr, 2011 10:34 am
Also, I think there's a waiting period before it kicks in --- like 60 days, or something like that. You can't apply for it when you need it and have coverage immediately.
0 Replies
1
Reply Wed 13 Apr, 2011 10:39 am
@JPB,
She has insurance now, but that would stop once she retires.

So it sounds like that would be another reason to get long term care insurance soon, if she was going to at all?
1 Reply
1
Reply Thu 2 Jun, 2011 04:49 pm
So, my mother turns 102 tomorrow. She's declined considerably in her mental capacity over the past year. She doesn't have Alzheimer's, but she has dementia. She also has very poor vision due to macular degeneration. As a result, she's withdrawing more and more into a child-like world. She sings a lot and has conversations with herself - very much like little girls do.

I've been reading that sometimes dolls can be soothing to dementia patients. So, I bought her a baby doll. I was going to give it to her on her birthday, but I'm worried. I'm not sure how she's going to take it. Will it make her happy or stressed? The last thing I want to do is stress her. I'm hoping the doll will offer her some companionship and comfort.

Any suggestions on how to present this thing? She may think it's areal baby. That might be good as long as she doesn't worry about taking care of it.
2 Replies
1
Reply Thu 2 Jun, 2011 04:56 pm
@Swimpy,
wow Swimpy, 102 is a proud age to be! Congratulations for your Mom.
Hm, interesting idea with the doll. I have no advice, sorry, but would like to
know the outcome of it, should you decide to buy one for her.
We have an "adopted" grandma who has dementia - she's 84 years old, and
it has gotten really paranoid.
1 Reply
1
Reply Thu 2 Jun, 2011 05:17 pm
@sozobe,
Now, unless she's in a very special situation, she should be eligible for coverage under COBRA, and at her age and with normal retirement, she should be eligible for that coverage at the company's group age for 36 months - double the time period for most separations. I won't dwell on the topic, but have you been taking this into your considerations.