(Wallace, however, never used the expression "natural selection", as far as I know, but did voice opinions not in opposition to the noton.)

He originally intended the term to be an analogue to the "artificial selection" used by livestock breeders and farmers with crops.

The problem with using the term "selection," he later decided, was that it implied some type of agent which was doing the "selecting." For him that agent was initially "nature," which, needless to say, is a rather slippery concept to begin with.

I find it interesting that much that is written to explain evolution contains a lot in the way of implicit teleology, all while denying the possibility of any teleological aspect to evolution.
0 Replies
1
Reply Fri 16 Oct, 2015 01:03 am
@puzzledperson,
Quote:

The theory of natural selection can't be disproven and I question whether it makes verifiable empirical predictions. You can call this infinite flexibility "elegant" but it might make more sense to characterize it as a philosophical dogma.

You're not alone there. Every year, more and more evolutionary theorists are attributing less and less to the role that "natural selection" plays in the evolutionary process, with many assigning it a role of virtual insignificance, apart from the obvious stabilizing or "culling" function it plays.
1 Reply
2
Reply Fri 16 Oct, 2015 02:21 am
@McGentrix,
McGentrix wrote:

I've spent a lot of time trying to figure out how Darwin got his dog to evolve into a boat. 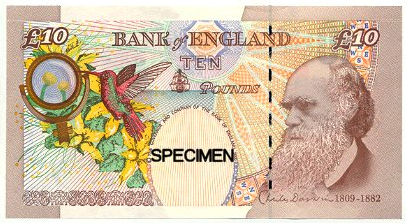 What the Dickens is this supposed to be? No humming bird, just a deadly dull game of cricket.

3 Replies
1
Reply Fri 16 Oct, 2015 11:51 am
@izzythepush,
nice looking penienzes Izzy. Our money looks like it was designed by a fuckin committee of color-blind accountants.

We should be honoring guys like the WRight Bros, or Lewis and Clqrk, NOOOO, they give us deqd presidents and a Secretary of the Treasury.

The mints created these commemorative quarters to keep us amused by shiny ****. They have tv shows in the wee hours of the night with these southern accent hawkers trying to peddle these things as "collectibles" Meanwhile thetreasury pockets all that free dough from assholes who keep the stuff out of circulation.

One reason I wasn't for Italy changing to the Euro, actually the only reason, since I'm a financial doppuss, was that I liked both the lira coins and the paper lire.

Every year, more and more evolutionary theorists are attributing less and less to the role that "natural selection" plays in the evolutionary process, with many assigning it a role of virtual insignificance, apart from the obvious stabilizing or "culling" function it plays.

PZ Myers and Larry Moran are both militant atheists and vociferous opponents of ID theory (of crucial significance to Farmer, and many others). Both are "mainstream" evolutionary theorists with a large following. Here are quotes from each of them on "natural selection:"

First thing you have to know: the revolution is over. Neutral and nearly neutral theory won. The neutral theory states that most of the variation found in evolutionary lineages is a product of random genetic drift. Nearly neutral theory is an expansion of that idea that basically says that even slightly advantageous or deleterious mutations will escape selection — they’ll be overwhelmed by effects dependent on population size. This does not in any way imply that selection is unimportant, but only that most molecular differences will not be a product of adaptive, selective changes. (Myers)

The revolution is over and strict Darwinism lost. We now know that random genetic drift is an important mechanism of evolution and there's more to evolution than natural selection. Unfortunately, this blatantly obvious fact is not understood by the vast majority of people and teachers. There are even many scientists who don't understand evolution. (Moran)

Farmer will probably accuse me of being a creationist for posting this,but...

1 Reply
3
Reply Sat 17 Oct, 2015 03:31 pm
@layman,
No, you use the arguments in a Creationist means to attempt to assert that there is a bigass war going on in science. As I said before, there is NOT> In your past visits youve presented a "Creationist leaning" in how you presented the statements about neutral theory. You seemed to be presenting some sort of argument that all the conclusions were of a totally random process in which naturl selection was "losing" its [lace.
You must recognize that Nat selection isnt

1Unimportant in the changes in genotypes through geologic history

2Neutral theory only states that several versions of a gene can exist at the same time in a population of organisms.

3Mutations are random, adaptive or exaptive forces are NOT.

(Lots of times we see the existence of archaic adapted forms of a species that are still hanging around well after their "primo adaptational" environment existed through time.

Some features, such as feathers were not an original adaptation to a specific function. For example, feathers on birds were probably not a feature that originally arose to allow for flight. Flight is considered an EXAPTATION.where a function arose as an aside to a features original adaptive function (perhaps warmth or cuteness, who knows?)

Neutral theory's makeup isnt "Replacing " anything, It augments the mechanisms involved in the evolutionary process. Its been around for decades and, was somehow boldly misinterpreted in its overall use (mostly by Creationist leaning folks who wish to subvert the evidence of linneages )

2Insect wings were adapted for a specific environment (also in the Crboniferous). They were an exaptation when used for flight in the later Carboniferous

3 Fish of the Rhipidistian suborders evolved progressively to be more "land adapted"(amphibians) as the Devonian non-marine environments became dominant as the various land masses began to coalesce into the later supercontinent.

Arguments, as they exist among the worker bees in the field surround topics like
1HOW MUCH genetic variation is adaptive?

Two scientists will argue mechanisms and results not whethere something doesnt happen at all or that theres a "new breed" of guys who, like the "New Global Tectonics" guys, are in "touch with the truth"

Thats what I see as the bullshit part with the Creationist sources jumping in as if they even understand what the science is saying.

Its difficult to look at the ancient world and rely on stochastics, when adaptation can be seen to provide phenotypes that are just "good enough" to survive the PRESENT environment and not be pre planned for the new.
1 Reply
1
Reply Sat 17 Oct, 2015 04:11 pm
@farmerman,
Quote:

you use the arguments in a Creationist means to attempt to assert that there is a bigass war going on in science.

According to the two theorists I quoted, there is nothing "ongoing" with respect to this particular issue. The revolution is now "over," they say.

I will grant you that I do allow that there are still parties on each side of the many different issues currently being debated with respect to evolutionary theory, mechanisms, etc. If so, then I guess any "revolution" that may occur is still "going on," at least to some extent.
1 Reply
1
Reply Sat 17 Oct, 2015 05:20 pm
@layman,
whatever dude. If you dont understand the topic dont try to play spokesman
1 Reply
1
Reply Sat 17 Oct, 2015 06:28 pm
@farmerman,
Quote:

If you dont understand the topic dont try to play spokesman

What "topic" am I trying to "play spokesman" for, ya figure, eh, Farmer?
0 Replies
1
Reply Sat 17 Oct, 2015 06:33 pm
I see no one has had the courage to state, categorically, whether Chuck was a charlatan or a snake oil salesman.

It's really pathetic when people try to take satire seriously.

Your idea of refined "satire" is extremely primitive, I'm afraid. No doubt every reader took your brief initial post extremely seriously, the fools.

What is it you're complaining about, exactly? That your post, which is not really worthy of responding to, is not the sole focus of this thread, as you had hoped?

There are people here who find evolutionary theory to be an interesting topic of discussion, notwithstanding your rather juvenile attempt to make a certain poster the butt of an extended "joke thread." Sorry. How pathetic, eh?
2 Replies
1
Reply Sat 17 Oct, 2015 07:05 pm
@layman,
If this was not worthy of a response, what are you doing here, clown?
1 Reply
1
Reply Sat 17 Oct, 2015 07:06 pm
@Setanta,
Quote:

If this was not worthy of a response, what are you doing here, clown?

Whatever my reason, it wasn't to respond to your lame post, pompous ass.
1 Reply
1
Reply Sat 17 Oct, 2015 07:11 pm
@layman,
By the way, this is typical of your method. No one, least of all me, stated that this is "refined" satire. That makes your sneer a straw man fallacy. What you may or may not doubt about the response of people to the OP is not relevant. You also have no no idea of what my "hopes" may or may not have been. For those who find evolutionary theory an interesting topic, there are rafts of threads here into which you might jump with your crypto-creationist bullshit. Exactly which "poster" do you allege i was attempting to make the butt of a joke?

This is typical of you, as i say. You're just trying to pick a fight. That's about all you've got going for you, huh? How pathetic.
1 Reply
1
Reply Sat 17 Oct, 2015 07:14 pm
@layman,
And yet you continue responding to me, you great braying jackass.
0 Replies