The U.S. National Elections For President, The Senate And The House Of Representatives.

Forums: Politics, Elections, Obama, Democrats, Primaries
Email this Topic • Print this Page
1
Reply Wed 29 Feb, 2012 11:46 am
@parados,
Snowe was one of those Republicans who talk center and vote right. The Democrats in the senate did everything but polish her shiny metal ass to get her to vote for health insurance reform in 2009, but, in the end, she voted the straight McConnell line all the way through to the end. On major issues, I see not a dime's worth of difference between her and the GOP senate leadership, so I'm certainly not sorry to see her leave the senate.
2 Replies
1
Reply Wed 29 Feb, 2012 02:11 pm
@joefromchicago,
Almost. She served on the Senate Finance Committee and voted with the Democrats to move the healthcare bill to the floor. The Republicans were unhappy with her, but from what I read, she's well liked by her constituents, who will probably miss her. I hope she's not seriously ill or something.
1 Reply
1
Reply Wed 29 Feb, 2012 04:15 pm
@Irishk,
That was a free vote for her, since the Democrats outnumbered her in the committee and she couldn't resort to a filibuster. Snowe and her colleague Collins are good at voting like moderates when it doesn't really matter. When the important votes come along, however, they fall into line behind the leadership.
0 Replies
1
Reply Thu 8 Mar, 2012 04:40 pm
Lost in all the hoopla about "super Tuesday" was the fact that Jean Schmidt, one of the most loathsome and reprehensible members of congress, was defeated in the Republican primary in her Ohio congressional district.
0 Replies
1
Reply Fri 16 Mar, 2012 04:28 pm
North Carolina votes on May 8th (?) on a constitutional amendment that would ban gay marriages and civil unions.
Obama today commented that he was against the ban. He has been careful to avoid getting involved in non-federal issues.
It strikes me as interesting that he would do so in the swing state of NC.
1 Reply
1
Reply Fri 16 Mar, 2012 05:47 pm
@realjohnboy,
Well, at least the man doesn't lack for confidence.
0 Replies
1
Reply Wed 28 Mar, 2012 09:56 am
@joefromchicago,
A final postscript on Olympia Snowe, courtesy of Alex Pareene at Salon:

I mean, Snowe “even tried to work with him on health care.” Hey, that was around two years ago, actually! How hard did she try, again? If I recall correctly, she intentionally delayed the process for months before finally voting against a plan she’d previously voted for, never making a single substantive criticism of the policy of the bill in the fear that her criticism would then be addressed by Democrats and she’d be forced to come up with a new reason to oppose the bill, because it turns out she didn’t actually want to vote for healthcare reform, and she would not have supported any plan to expand coverage to all Americans, no matter how it worked.

It's really, really difficult to see how Romney can win the election without winning both OH and FL. And even if he does, there are MANY different combinations of states Obama could win and still win, as long as he carries PA.

Cycloptichorn
1 Reply
1
Reply Wed 28 Mar, 2012 11:59 am
@Cycloptichorn,
Rasmussen today also followed up with a poll that puts Obama at +8 in OH. That's getting out of control for Romney.

Cycloptichorn
1 Reply
1
Reply Wed 28 Mar, 2012 01:32 pm
@Cycloptichorn,
Rasmussen and Quinnipiac had Obama over Romney 50-42 in polls taken last week in Virginia. VA (13 electoral delegates) is a swing state which Obama carried in 2008. That was the 1st time the Dems won since LBJ did it in 1964.
0 Replies
1
Reply Thu 5 Apr, 2012 05:16 pm
Romney seems to have the nomination wrapped up (doesn't he?). He is now largely turning his attention to Obama. He needs to do that.
A Gallup poll* out today has him trailing Obama 39-48 after being ahead 49-41 in October amongst self-described independent voters in 12 "swing" states**.
Women independents favored Romney 48-43 in the last quarter of 2011 but now go for Obama 51-37.
This poses a problem for Romney, I think. There are a couple of more primaries (PA and TX) before he gets rid of Santorum and then there is the Repub convention itself. He can not go after the indy's votes too aggressively before the faithful gather in Tampa.
* The Gallup poll of registered voters has a margin of error (MOE) of 6% and included a comment to the effect that "...question wording and practical difficulties may lead to a bias or error."
** States include Colorado. Florida, Iowa, Michigan, Nevada, New Hampshire, New Mexico, North Carolina, Ohio, Pennsylvania, Virginia and Wisconsin.
0 Replies
1
Reply Fri 13 Apr, 2012 09:31 am
Plonking this 2012 Senate race info from Cook Political Report (yes, it's early to make predictions before the primary season has ended).

Senate Overview: Part I – The Republicans

April 12, 2012
Senior Editor Jennifer Duffy writes: With the primary season about to begin in earnest and with the general election less than seven months away, it is a good time to step back and assess the bigger picture of the battle for the Senate majority. In late February, Maine Republican Sen. Olympia Snowe announced that she would not seek re-election. A day later, former Democratic Sen. Bob Kerrey reversed his decision and got into the open-seat contest in Nebraska. Taken together, these decisions led to more than a few breathless declarations that Senate Republicans were no longer in a position to capture the majority from Democrats in November. Those statements were both premature and somewhat short-sighted. It is true that Republicans’ prospects have changed, but not to the extent that the majority is out of their reach.

Perhaps it is worth noting here that we have always believed that Republicans’ shot at the majority was never a sure thing, but thought that they had a 60 or 65 percent chance grabbing it. We did, and still, do believe that the GOP will gain seats in November. While it is now possible that Republicans won’t score the net gain of seats they need, it is equally possible that they can win enough Democratic-held seats and protect enough of their own vulnerable seats to win the majority. At this point in the cycle, we believe that the GOP will pick up between two and five seats. Prior to Snowe’s and Kerrey’s decisions, we put the prospect of net gains for Republicans at between three and six seats.

And, while Cook did very well on their predictions for the 2010 race, Election Projection, I believe, did even better.

Their statistics for the 2012 Senate race (at this very early point in time) have the Democrats losing 3, the Republicans gaining 3 and no change for the 2 Independents.

So, effectively, a 50/50 split.
0 Replies
1
Reply Sat 14 Apr, 2012 01:49 pm
I've been watching the (R) race for Senate in Indiana where long time moderate (and 80 year old) Richard Lugar is being challenged by the Teaparty backed Mourdock. The establishment is worried that a safe Repub seat could slip away, so their Pacs are attacking Mourdock hard ahead of the May primary. Some $700K in anti-Mourdock ads.
Polls have Lugar ahead by single digits.
The Dem candidate will be Donnelly. If Lugar wins the primary, the polls have him winning in November by 50-29. Mourdock vs Donnelly: 35-35.
2 Replies
1
Reply Wed 18 Apr, 2012 01:09 pm
@realjohnboy,
Get Your Foot Out Of My Mouth
Maybe it's just my imagination but it seems to me that this election cycle has seen more surrogates for the candidates making stupid comments.
Already Obama and Romney have had to distance themselves from intemperate comments by over eager supporters/donors.
0 Replies
1
Reply Thu 19 Apr, 2012 10:39 am
@realjohnboy,
Glad to see you posting here, rjb!

Keeping up with the Indiana Senate race (R) - Mourdock pulled ahead of Lugar in a poll yesterday - only by one point, though. They may have to gear up more attack ads.
0 Replies
1
Reply Sat 21 Apr, 2012 02:54 pm
Orrin Hatch
The 74 year old Republican senator today came oh-so-close to winning enough delegates to avoid a primary election. He needed support from 60% of them but got 59.2% - 50 votes shy.
First elected in 1977, he has been somewhat of a moderate who has had a history of working with Democrats, drawing the ire of the tea party.
They back state senator Dan Liljenquiet in the June 26th primary. The winner will face only token opposition from any Democrat in the general election.
This will be an expensive diversion for Hatch and for Romney - who supports him.
0 Replies
3
Reply Wed 25 Apr, 2012 10:13 am
Now that Romney has captured the nomination for the Republicans, let's look at the state of the polling:

As of today, Obama holds a 4-point lead in the RCP averages over Romney in the general election at-large polling. Basically, the only poll that is consistently going Romney's way is Rasmussen's tracking poll (big surprise there).

Gallup has now rebounded to +7 Obama, from an initial deficit of about +4 Romney. That was pretty fast, actually - the bounce Romney got from Santorum dropping out didn't last long.

I really don't know why they don't have more states turned light blue on that map, considering the handsome leads Obama enjoys there. I suspect that they have political motivations for doing so, as RCP is generally a right-leaning site.

The so-called 'safe' states for each candidate, per RCP, put Obama at 227 Electoral Votes and Romney at 170. So it's going to be an easier battle for Obama to win the swing states he needs, right off the bat.

You can easily see that Obama has a WIDE variety of options to get the 43 EV's he needs to win. I would say right off the bat that I think it to be extremely likely that Obama will win PA, CO and NV - the polling in those states has just constantly been in Obama's favor, all three voted his way in 2008 and all three states have trended blue nationally for a while now (Bush won CO in 2004 but only by a bit).

That's a pretty favorable landscape for Obama. Romney basically needs to win4/5 of the toss-up states in order to win the election; and not the little ones, either. It's really difficult to see a Romney victory without him winning both FL and OH.

How will this change in the upcoming months, when we have debates, massive spending by third-party groups, economic shifts, and possible gov't shutdowns? We'll have to wait and see. But the initial polling data is in Obama's favor and it will take a lot of work for Romney to overcome him.

Really? Now that's surprising. It seems like the polling there hasn't always been in his favor - though I know the state GOP hasn't done any favors with their controversial bills.

Drawn from FiveThirtyEight’s polling database, which includes thousands of surveys, here is the average of the 10 most recent national polls as of late April in each election year going back to 1972 (for the 1980 election and before, fewer than 10 general election polls conducted in the first four months of the year were available). 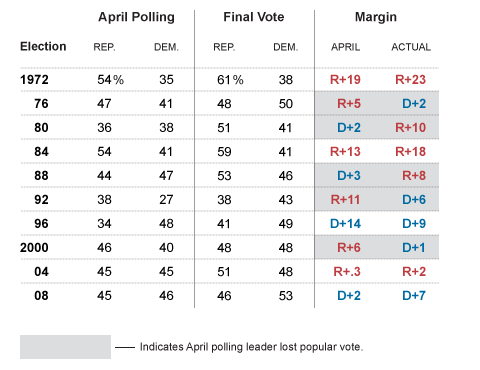