Forums: News, Science, Evolution, Biology, Dinosaurs
Email this Topic • Print this Page
Reply Sat 25 Jun, 2011 01:03 am
The end of modern Piltdowns/Darwins?
Quote from http://www.irishweatheronline.com/news/nature/scientists-discover-dinosaurs-were-warm-blooded/21439.html
"They found that Brachiosaurus had a temperature of about 38.2 degrees Celsius (100.8 degrees Fahrenheit) and Camarasaurus had one of about 35.7 degrees Celsius (96.3 degrees Fahrenheit), warmer than modern and extinct crocodiles and alligators, but cooler than birds."

Type: Question • Score: 4 • Views: 3,508 • Replies: 42
No top replies
1
Reply Sat 25 Jun, 2011 04:24 am
@bewildered,
I dont know what youre getting at about "Piltdowns". Back in the 1090'sBakker had first reported that dinosaur bones in cross section were typical of endothermic organisms and that features such as heat dissipating structures had been evolved away by the Cretaceous for most dino families. The argument that dinosaurs could have been endothermic was a non issue since it was agreed on many years ago.
AS far as the reporting herein of the actual "body temps". These guys have no basis to conclude the similarities to body temperetaures from isotopes without more detailed information about their ratios. They have to go through several more rigorous layers of experiment and evidence collection before the hypothesis is accepted as gospel. Im always skeptical when the news articles precede the actual scientific publication.
C13 is a non biiogenic carbon isoptope and O18 is part of the O18/O16 isotope ratio(temperature sensitive) scale that needs to be comp;ared as a true ratio before any actual temperature significance can be forwarded. If they only measure O18, they cant say anything about temperatures because ocean deposited rocks adjacent to volcanoes are also rich in O18 . Does that mean that dinosaurs could have had body temps of say, boiling water??
This "Irish Weather" article is written in a bit of a slapdash manner and is just some reporters understanding of **** that probably comes off the wire. No real in depth reporting ahs (IMHO) been done.

Lets look at the techy literature first. Id suggest that you google the principle authors names and begin a search for as much of the background data as is on the web. Eg.How did they generate any temp ranges for the Flourapatite (bone sourced minerals in fossils) when the reporter only speaks of O18 to C13 and not including O16_

Im not saying that this is untrue . Its just that we were given no basis from which to conclude the results as did the authors of the tech paper.
The remarkeable "ccurate" ranges of body temperatures are , as reported, actually kind of funny when you see how with great authority some dude publishes that Carnosaurs had a body temp of 38.5 degrees C. and noone should question this decimal level temperature?? Cmon, That kind of reporting needs to be in a tabloid (maybe Irish weather is one).

Dont jump to ends that you cant support, be more demanding with your data and any precanned conclusions
1 Reply
1
Reply Sat 25 Jun, 2011 04:44 am
@bewildered,
I think we already knew this (that Some dinosaurs were warm blooded). I'm not sure about the precise temps you mentioned, but the general idea came from a few decades ago if I remember correctly.
1 Reply
1
Reply Sat 25 Jun, 2011 06:08 am

Thay probably did not celebrate as many holidays as we do.

Maybe thay coud celebrate April 1st ?
( I don 't know whether there is any evidence in the fossil record
of their having played any April Fools Day jokes on one another. )

Are you saying that dinosaurs had un-nucleated red blood cells? What is your source for this information?
0 Replies
2
Reply Sat 25 Jun, 2011 11:52 am
i read somewhere that dinosaurs liked martian blueberry smoothies from Starbucks


of course i might just have made it up as well

sometimes i get bewildered
1 Reply
1
Reply Sat 25 Jun, 2011 05:41 pm
@djjd62,
Dinoxaurs and mammals split off from anapsid reptiles in the PErmian and both groupds,(diapsids and synapsids) split off into their repective groups in the TRiassic. SO having several common ancestry characteristics is certainly what cladistics analyses tells us.
Mammals were covered with hair, had unique dentition,had a single opening at the squamosal bones, were endothermic (based on what we see in todays mammals) and gave live birth (Except for the montreme mammals which still lkay eggs). DInosaurs have two skull openings, were covered with scales and or feathers, were possibly endothermic (based on bone structures) and layed eggs. (If there were live birth dinosaurs Im not aware of any from fossil evidence )I only know of seasnakes giving birth to live young and the evolutionary significance of that is obvious

SO the similarities if the two groups isnt surprising. Im just not convinced about how the guys at CAl Tech deduced the actual body temps of specific dinosaurs.

Tuna are endothermic too but their body temps are much lower than mammals. 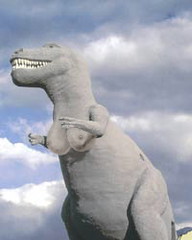 I do not accept the notion
that T- Rexes were masters of jiu-jitsu.

David
0 Replies
1
Reply Sun 26 Jun, 2011 12:38 am
@farmerman,
Is it not strange that dinosaurs are the only kind of reptiles that had mammalian red blood cells and mammalian body temperatures? You shared a common ancestor with dinosaurs, so it would not suprise you at all if a reptile could type as you did.
4 Replies
1
Reply Sun 26 Jun, 2011 01:38 am
@bewildered,
bewildered wrote:

Is it not strange that dinosaurs are the only kind of reptiles that had mammalian red blood cells and mammalian body temperatures? You shared a common ancestor with dinosaurs, so it would not suprise you at all if a reptile could type as you did.


Did their hands fit the keyboards conveniently ??

You shared a common ancestor with dinosaurs, so it would not suprise you at all if a reptile could type as you did.

Since dinosaurs and mammals share a common ancestor they have several things in common as well as many things that distinguish them from each other. Mammals that lay eggs are an example of a retained characteristic .

As far as typing, Ill leave that to you to discover evidence that saurian keyboards were wiped out in the Cretaceous. Youve got your work cut out for you, better take a lab partner and some hooch. It gets cold in the desert at night
2 Replies