Forums: Mars, Space, Science, Astronomy, Science And Math
Email this Topic • Print this Page
1
Reply Tue 10 Jul, 2018 04:51 am
@gungasnake,
jpl has a gallery of types of ventifacts seen in mars rocks. I think Id call that one pointed at by the arrow , a "dreikanter". Its not a sign of alien intelligence

When wind is the only tool mars has, the ventifacts will abound.
0 Replies
1
Reply Tue 10 Jul, 2018 04:52 am
@gungasnake,
I see youre showing us a bottle of your meds again
0 Replies
1
Reply Thu 12 Jul, 2018 01:32 am
This may not be the most appropriate place for this, but it is the most currently active thread about Mars. Fifteen years ago, Mars passed closest to the Earth in 60,000 years. (To put that in perspective, that was about one quarter of the way into the last "ice age" which ran from about 75,000 years ago to about 12,000 years ago.)

This summer, Mars will again pass close to the Earth, the closest approach being in late July. You can read about by clicking here.
1 Reply
1
Reply Thu 12 Jul, 2018 02:52 am
@Setanta,

Salty water just below the surface of Mars could hold enough oxygen to support the kind of microbial life that emerged and flourished on Earth billions of years ago, researchers reported.

In some locations, the amount of oxygen available could even keep alive a primitive, multicellular animal such as a sponge, they reported in the journal Nature Geosciences on Monday.

"We discovered that brines" - water with high concentrations of salt - "on Mars can contain enough oxygen for microbes to breathe," said lead author Vlada Stamenkovic, a theoretical physicist at the Jet Propulsion Laboratory in California, United States.

"This fully revolutionises our understanding of the potential for life on Mars, today and in the past," he told AFP news agency.

Up to now, it had been assumed that the trace amounts of oxygen on Mars were insufficient to sustain even microbial life.


WATCH: Scientists launch BepiColombo spacecraft to explore Mercury (2:17)
"We never thought that oxygen could play a role for life on Mars due to its rarity in the atmosphere, about 0.14 percent," Stamenkovic said.

By comparison, the life-giving gas makes up 21 percent of the air we breathe.

On Earth, aerobic - that is, oxygen breathing - life forms evolved together with photosynthesis, which converts CO2 into O2. The gas played a critical role in the emergence of complex life, notable after the so-called Great Oxygenation Event some 2.35 billion years ago.

But our planet also harbours microbes - at the bottom of the ocean, in boiling hotsprings - that subsist in environments deprived of oxygen.

This report from The Independent (UK) reports a "vast lake" under the southern polar ice cap. The southern polar cap is almost entirely "dry ice," which is to say CO2 ice.
1 Reply
1
Reply Mon 22 Oct, 2018 09:20 pm
@Setanta,
I don't know how to rate articles like the one I posted, but I count on key posters here to help out. Thanks.
0 Replies
1
Reply Mon 22 Oct, 2018 09:25 pm
Hey, no sweat EB . . . I think you do a good job here.
0 Replies
1
Reply Mon 22 Oct, 2018 09:30 pm
@edgarblythe,
Interesting stuff. There are an abundance of sea life that we're not even aware of. Even near volcanic activity on the sea floor, there are many sea life living near it. https://www.leisurepro.com/blog/explore-the-blue/5-marine-creatures-live-near-hydrothermal-vents/
0 Replies
2
Reply Thu 25 Oct, 2018 06:49 pm
Not Mars related, but interesting stuff.
How did the Apollo flight computers get men to the moon and back ?

1 Reply
1
Reply Mon 5 Nov, 2018 12:42 pm
@edgarblythe,
I remember when these were first discovered, it was so amazing. We spent days speculating on them. That was fun!

It's more on a visceral level than anything else. A feeling of awe that we can see something like this.

If you want a high resolution (4798 x 4798) version of that picture for a background image:

Both links lead to the same image as far as I can tell. I figured I'd post them both in case one of the links eventually dies.

I just submitted the links to Internet Archive as well, in case both links eventually die. They hadn't been recorded, but they are now.
0 Replies
3
Reply Mon 5 Nov, 2018 05:00 pm
@edgarblythe,
The scale of natural features on Mars is just amazing. The "scar in the middle" is the Valles Marinaris, named for the Mariner fly-by missions which visited Venus, Mercury and Mars. If the western end were laid in Portland, Oregon, the eastern end would stretch to Miami. It makes the Grand Canyon look like a ditch. 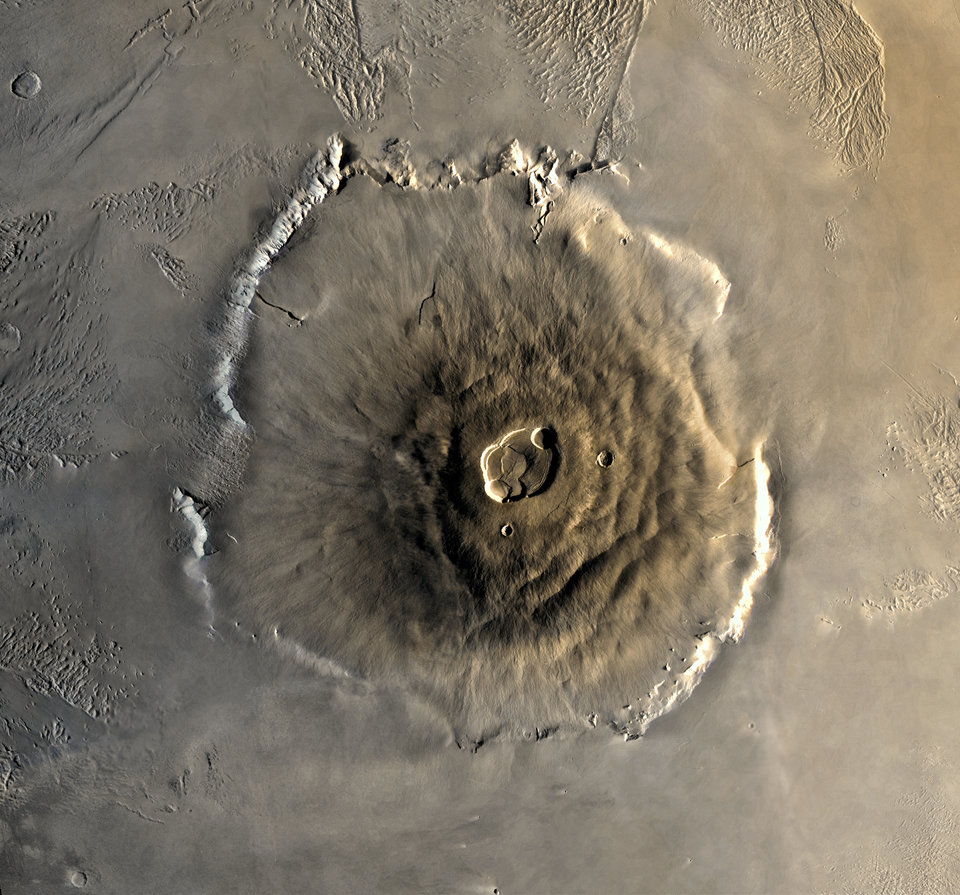 This is Olympus Mons, the largest known volcano in the solar system. It is what one might call an exo-volcano--it's caldera rim rises above the Martian atmosphere. It is three times as tall as Mt. Everest.

If you could put Olympus Mons on France, with the southwestern edge on Bordeaux, it would stretch to the Swiss and Italian borders, and cover Paris:

1 Reply
1
Reply Thu 8 Nov, 2018 07:18 am
Mars InSight Lands on November 26th. Here’s where it’s going to touch down
https://www.universetoday.com/140455/mars-insight-lands-on-november-26th-heres-where-its-going-to-touch-down/?fbclid=IwAR1EEJnszWjU4xItBSL5nzLetQn6q2bP8pqlnJ1jJ01DWQOxaTaASqgTY6o
if one were to describe the region where NASA’s Interior Exploration using Seismic Investigations, Geodesy and Heat Transport (InSight) lander will be landing (on Nov. 26th, 2018), the word “plain” would probably come to mind (and it would be appropriate). This region is known as Elysium Planitia, and it is where InSight will spend the next few years studying Mars’ interior structure and tectonic activity for the sake of learning more about its history.


To put it simply, Elysium Planitia is a broad plain that straddles the equatorial region of Mars. While there are several interesting features there, such as ancient volcanoes, large craters, and river valleys, the site where InSight will be landing is decidedly flat and boring-looking. Given the nature of InSight’s mission; however, these same characteristics make it the ideal spot.

“If Elysium Planitia were a salad, it would consist of romaine lettuce and kale – no dressing. If it were an ice cream, it would be vanilla… Previous missions to the Red Planet have investigated its surface by studying its canyons, volcanoes, rocks and soil. But the signatures of the planet’s formation processes can be found only by sensing and studying evidence buried far below the surface. It is InSight’s job to study the deep interior of Mars, taking the planet’s vital signs – its pulse, temperature and reflexes.”

Because InSight is a lander, it will be staying in one place for the duration of its mission. As such, the landing site needed to fulfill a number of requirements. These included the site being bright and warm enough to power the lander’s solar cells and keep its electronics within temperature limits for an entire Martian year (26 Earth months). This led the team to focus on the equatorial band, where the lander would be able to get enough sunlight year-round.

The site also needed to be low-enough in terms of elevation to have sufficient atmosphere above it, which will ensure that the lander slows down enough (from air friction) before deploying its chute and landing rockets to make a safe landing. To ensure that the three-legged lander could touch down and deploy its solar cells safely, the site also needed to be relatively flat, free of rocks and not subject to strong winds.


This artist’s concept depicts the smooth, flat ground that dominates InSight’s landing ellipse in the Elysium Planitia region of Mars. Credit: NASA/JPL-Caltech
Of the original 22 sites that were considered, only three made it to final round back in August of 2013. There included Elysium Planitia, Isidis Planitia and Valles Marineris. To see how these three contenders measured up, the team examined reconnaissance images and weather records obtained by NASA’s various Mars orbiters. In the end, Isidis Planitia and Valles Marineris were ruled out for being too rocky and windy.

This left Elysium Planitia, or more specifically, an elliptical stretch of land located on the western edge of a flat, smooth expanse of lava plane. This patch of land runs roughly from west to east and measures about 130 km (81 mi) in length and 27 km (17 mi) in width. As Tom Hoffman, InSight project manager at JPL, explained:

Once deployed, the InSight lander will rely on three instruments to take the “vital signs” of Mars and learn more about the history of the Solar System when the rocky planets has just formed. These instruments include the Seismic Experiment for Interior Structure (SEIS), the Heat Flow and Physical Properties Package (HP3), and the Rotation and Interior Structure Experiment (RISE).


This artist’s concept depicts the InSight lander on Mars after the lander’s robotic arm has deployed a seismometer and a heat probe directly onto the ground. Credits: NASA/JPL-Caltech
The SEIS instrument – which was developed by France’s National Center for Space Studies (CNES) in collaboration with NASA and several European scientific institutions – will record Mars’ seismic waves and attempt to determine if they are the result of “marsquakes” and meteor impacts. This information will also reveal a great deal about the planet’s interior layers.

The HP³ probe, supplied by the German Aerospace Center (DLR), will use a Polish-made self-hammering mechanism to bury itself deeper than any previous Martian probe – 3 meters (10 feet) or more. As it descends, the probe will extend sensors that will measure the temperature profile of the subsurface. Combined with surface measurements, the instrument will determine the amount of heat escaping from the planet’s interior.

The (RISE) experiment will use the lander’s X-band radio link to conduct Doppler tracking of the lander’s location, which will also allow it to measure variations in Mars’ rotational axis. Since these variations are primarily related to the size and state of Mars’ core, this experiment will shed light on how Mars lost its magnetosphere billions of years ago (and hence, most of its atmosphere and surface water).

The rocket that launched InSight also launched a separate NASA technology experiment known as Mars Cube One (MarCO), which consists of two CubeSats that are traveling to Mars behind InSight. The purpose of this mission is to test the ability of miniaturized deep space communications equipment, which will relay InSight data back to Earth as it enters the Martian atmosphere and lands.


An artist’s rendering of the twin Mars Cube One (MarCO) spacecraft as they fly through deep space. Credit: NASA/JPL-Caltech
By studying Mars interior, InSight will help scientists to determine what was happening roughly 4.5 billion years ago. This was a time when all the rocky planets in our Solar System (Mercury, Venus, Earth and Mars) had just formed from the Sun’s circumsolar dust ring. By learning more about it’s core, the mission will shed light on one of Mars’ most enduring mysteries: how it went from being warmer and wetter to the dry and freezing place we know today.

The answers to these questions will also teach us more about the conditions and circumstances under which life formed here on Earth, and how it might have once existed (and possibly still does) on Mars. With InSight scheduled to land later this month – a little before 3 p.m. EST (12 p.m. PST) on Nov. 26th – and with the first science results expected three months later, we can anticipate some very interesting finds about the Red Planet coming soon!

Be sure to check out this overview of the Mars InSight mission, courtesy of NASA/JPL:
1 Reply