What are you up to this Easter?

Kishka or kishke (Slovene: kašnica; Belarusian кішка, kishka; Polish: kiszka; Romanian chişcă Silesian krupńok; Yiddish kishke; Hebrew קישקע; Russian Кишка) refers to various types of sausage or stuffed intestine with a filling made from a combination of meat and meal, often a grain. The dish is popular across Eastern Europe as well as with immigrant communities from those areas. It is also eaten by Ashkenazi Jews who prepare their version according to kashrut dietary laws. 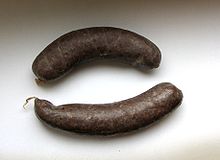 http://en.wikipedia.org/wiki/Kishka_%28food%29
2 Replies
2
Reply Sun 8 Apr, 2012 07:54 am
@msolga,
As an Ashkenazi Jewish family, we used to eat it occasionally. After about 1972, and having developed different (hopefully healthy) eating habits, I eat it maybe once per year. I can't honestly say (like any other sauasage) it agrees with my stomach entirely being that I'm mostly vegetarian - a non-red-meat-eater who eats some skinless chicken and salmon or cold-water fish.

As for the 'other' holiday, it's Passover now, as well. I avoid eating matzoh as it too can be tough on the belly; however, we sometimes make fried matzoh...that's broken up matzoh soaked in beaten eggs. It's a tasty way of eating matzoh.
2 Replies
1
Reply Sun 8 Apr, 2012 08:03 am
@Ragman,
Interesting, Ragman.
So I take it kishka is a fatty sausage?

(I see that one variety is a "blood" sausage, similar to black pudding.
Never tried myself. I imagine it's an "acquired" taste.)

Well, it doesn't HAVE to be fatty but it often is. My mom used to mix into it some Corn Flake crumbs and it was sort of drier and crunchy...great when grilled (the kishka...not my Mom).
1 Reply
1
Reply Sun 8 Apr, 2012 08:12 am
@Ragman,
Ah, many different varieties.
Crunchy sounds different!

I thought it might have been fattiness which caused the stomach upsets you & chai mentioned.
0 Replies
1
Reply Sun 8 Apr, 2012 08:18 am
@Ragman,
Quote:

As for the 'other' holiday, it's Passover now

Here we are all talking about easter!
When some of you are celebrating Passover.
Very interested to hear what you've been doing, too.

It's just that I'm very interested in different cultural traditions, Ragman ... food, festivities, etc.
Me, my easters are of the heathen variety these days.
Not too much "celebrating" happening at all.

<singing> Who stole the Kishka? Jascha stole the kishka!


Someone call a cop!


You can have my shinka
Take my sweet krusczyki
Take my plump pierogi
You can even have my chernika
Take my long kielbasa
2 Replies
1
Reply Sun 8 Apr, 2012 08:46 am
@msolga,
<snort>


You can have my shinka we would say swienko, which was our dialect for "pork" of "pig"
Take my sweet krusczykiThese taste like the noodles in a Chinese restarant , except sugar coated
Take my plump pierogithese taste like **** to me
You can even have my chernika do they mean ciarnina or ducks blood soup?
Take my long kielbasa touch my kielbasi and you must be prepared for combat
0 Replies
2
Reply Sun 8 Apr, 2012 09:25 am
@msolga,

I've never had scrapple, but I remember when my brothers old girlfriend tasted it (she hated it), she said it tasted like scrapple.

Combine stock, cornmeal, thyme, marjoram, basil, coriander and paprika in a 4 quart, heavy bottomed saucepan.
Bring to boil, reduce heat and simmer, stirring constantly, until mixture pulls away from the sides of the pan.
Remove from heat. Add lemon juice, onion and turkey.
Turn scrapple out into two 8x4 inch loaf pans that have been rinsed with cold water.
Refrigerate until firm.
To serve, slice scrapple into 1/4 inch slices, dip in flour and saute in oil until brown on both sides.
Makes 2 loaves.
Tags : Poultry

You also can cube the turkey meat, add some garbanzo beans, olives, garlic, olive oil and balsamico vinegar and mix it with some greenery as salad.

If I ever gave someone kishka for the first time, I'd fully expect this....

It's an acquired taste.
2 Replies