Forums: Canada, Politics, Canadian Politics, Canadian Election 2011
Email this Topic • Print this Page
2
Reply Mon 25 Apr, 2011 01:45 pm
okay so no early voting due to car trouble, now have to vote with the rest of the rabble on election day, yecch

and now i find out that the communist party has a member running in the next riding, the mother of the kid i voted for a few years back in the provincial election, damn, i'd have voted for her if i could

or maybe not, i was sure i heard she was running, unless she was declaring for the upcoming provincial election
1 Reply
1
Reply Fri 29 Apr, 2011 09:36 am
@djjd62,
Are these reports in the American media true, that the NDP could actually win the whole taco?

Cycloptichorn
3 Replies
1
Reply Fri 29 Apr, 2011 09:50 am
@Cycloptichorn,
from what i've seen, it still looks like a conservative minority, but the ndp could take second place, and if the leader formed a coalition government with the liberals who will take third (if the ndp take second) he'd effectively be the prime minister
0 Replies
1
Reply Fri 29 Apr, 2011 10:03 am
@Cycloptichorn,
it's been really funny to see this election progress, at the beginning the libs and cons were basically fighting each other and the ndp just plugged along, then from out of nowhere the ndp gained this sweeping popularity and the two other parties had to change tack quickly to start attacking mr. layton and his party

for mr. layton's part he's very charismatic, he's a cancer survivor, had a hip operation and hasn't let any of it slow him down, his parliamentary record puts the other major leaders to shame 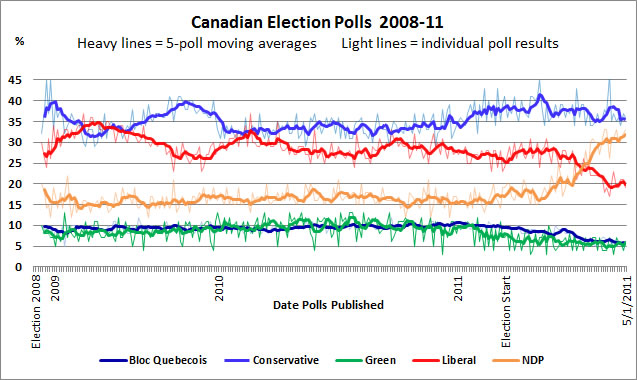 they've made some real gains in quebec for some reason

it's funny, we have a snap 5 week election and it already seems too long, i don't know how you guys go through your year(+) long campaigns

Cycloptichorn
0 Replies
2
Reply Fri 29 Apr, 2011 10:58 am
I voted on Monday. It's a three way heat in my neighbourhood. I can't stand the conservative candidate, the only issue he's made any noise on was the long gun registry. Seriously! I don't know anyone who owns a gun, and in this inner city neighbourhood why would they own a rifle, or care about hunting more than, say, oh I dunno, education, healthcare, infrastructure - (not jails and jets)... so WTF?
The liberal candidate seems like a good choice, she was Anne McClellan right hand, but the liberal party is out of favour here, so I voted NDP. Lewis Cardinal, went to the same highschool as me, he's a really interesting candidate. He's the brother of cop on Corner Gas. He ran for city council in the fall, didn't make it, but I think he's a rising star, very, very smart individual. I'm praying I voted with the right party, didn't jinx the vote. I don't have the best history...
0 Replies
1
Reply Fri 29 Apr, 2011 11:13 am
@djjd62,
djjd62 wrote:

it's funny, we have a snap 5 week election and it already seems too long

that's why I voted early - I was already tired of it - once I told the subway canvassers I'd already voted they backed off
1 Reply
1
Reply Fri 29 Apr, 2011 07:52 pm
@ehBeth,
My understanding is that no vote totals can be revealed until polls in the west close. Tomorrow, for me.
1 Reply
2
Reply Fri 29 Apr, 2011 08:23 pm
@realjohnboy,
That's right. There is some controversy about this as people who tweet /post about results in the east may be charged.

the election isn't until Monday - with the full results available after midnight Eastern
1 Reply
1
Reply Sat 30 Apr, 2011 04:49 am
@ehBeth,
i though about starting to tweet at 9:31 am (one minute after the polls open my time) that early results show a landslide victory for gilles duceppe, or maybe just make up insane write in names every hour, from polls open to close
0 Replies
1
Reply Mon 2 May, 2011 07:50 am
no green vote, was surprised to find the marxist leninist candidate on the ballot, so he got my vote
0 Replies
1
Reply Mon 2 May, 2011 01:08 pm
@ehBeth,
ehBeth wrote:

tomorrow? the election isn't until Monday - with the full results available after midnight Eastern

- usually vote for the underdog .

the things a father has to do