Sure High Seas, enjoy your lettuce at $9 lb.


HS is likely unaware of the current cost of lettuce, so she doesn't have the context to understand your point.
0 Replies
1
Reply Tue 5 Jul, 2011 02:59 am
@farmerman,
farmerman wrote:

YOU get what you pay for. (Demand always trumps anything else)


Of course it does - and that's exactly what the answer to your question on demand says. I'm not surprised it went over the heads of the salad-obsesssed here but you know enough to understand that we'll never get domestic demand going again until the unemployment / underemployment problem is solved.

Finally - your obsession with "trickle down" is puzzling, as there's no such thing in open economy macroeconomics. If it ever existed it was in some closed Keynesian economy - and we definitely don't live in one. We have free movement of financial capital, goods, services, and (up to a point) also labor.
1 Reply
4
Reply Tue 5 Jul, 2011 05:14 am
Leaving aside that none of this tripe HS is posting has anything to do with Michelle Bachmann--not getting a living wage is being "underemployed" just as surely as if not getting full time work. HS is living in some ugly, selfish, capitalist La-la Land.
0 Replies
3
Reply Tue 5 Jul, 2011 05:32 am
@High Seas,
"trickle down" has al;ways been aided by dereugukation (my main catching point) . NO INDUSTRY will do what it oughta without regulation. ANd, as I said before, regulation spurs new industry to comply. Ill bet that your entire area of business somehow grew in response to a need for better information of mort tables etc.
2 Replies
-1
Reply Tue 5 Jul, 2011 05:43 am
@plainoldme,
Polls show Bork Obunga losing to a "generic republican candidate". That means that Donald Duck and Daffy Duck, either one, would beat him.

Best yet, picture a Duck/Duck ticket with both Donald AND Daffy running against Obunga: 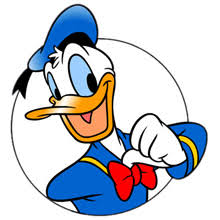 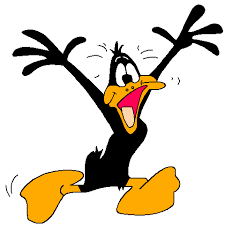 That would create a 49-state landslide with just Maryland and D.C. voting for Bork as in 1980.

Now try picturing a Perry/Cain ticket running against Bork; I can't picture Bork even holding Md. or D.C. against that...

The 2012 presidential marathon is on, and one mainstream pollster (Rasmussen) says a Republican apparition is opening up a lead on President Obama. (Any Republican 46 percent, Barack Obama 42 percent.) A growing number of Democrats figure that whoever can keep his head in the rattle and bang of unexpected events just doesn’t understand the situation.....


One analysis shows Daffy beating Bork Obunga by a lesser margin of forty states or so while Donald beats him in a total rout; that just means the pubbies need to ensure Donald is at the top of the ticket.

"trickle down" has al;ways been aided by dereugukation (my main catching point) . NO INDUSTRY will do what it oughta without regulation. ANd, as I said before, regulation spurs new industry to comply.

Noplace is that clearer than the debacle caused by the Clinton-era deregulation that brought us the financial crisis. We're still picking up the pieces of that one domestically, neither the new financial law (which doesn't even mention Fannie Mae and the other quasi-public toxic asset collections bailed out by taxpayers and creates yet more incentives to protect "too big to fail" private insurers and banks) nor the Fed's mad money-printing racket have helped unemployment, and, since the new slow-motion euro disaster will eventually reach us too unless Germany can stop it in its tracks, calling for new regulation is daylight madness. To see exactly why, read the brief article by a very highly respected economist, Brad deLong, involved in the 1990s deregulation follies:
http://www.project-syndicate.org/commentary/delong115/English

Confessions of a Financial Deregulator

BERKELEY – Back in the late 1990’s, in America at least, two schools of thought pushed for more financial deregulation – that is, for repealing the legal separation of investment banking from commercial banking, relaxing banks’ capital requirements, and encouraging more aggressive creation and use of derivatives. If deregulation looks like such a bad idea now, why didn’t it then?

· In the global economy’s industrial core, at least, it had then been more than 60 years since financial disruption had had more than a minor impact on overall levels of production and employment. While modern central banks had difficulty in dealing with inflationary shocks, it had been generations since they had seen a deflationary shock that they could not handle.

· The profits of the investment-banking oligarchy (the handful of global investment banks, including Goldman Sachs, Morgan Stanley, and JP Morgan Chase, among others) were far in excess of what any competitive market ought to deliver, owing to these banks’ deep pockets and ability to maneuver through thickets of regulations.

· The long-run market-return gradient – by which those with deep pockets and the patience to take on real-estate, equity, derivative, and other risks reaped outsize returns – seemed to indicate that financial markets were awful at mobilizing society’s risk-bearing capacity.

· The poorer two-thirds of America’s population appeared to be shut out of the opportunities to borrow at reasonable interest rates and to invest at high returns that the top third – especially the rich – enjoyed.

These four observations suggested that some institutional experimentation was in order. Depression-era restrictions on risk seemed less urgent, given the US Federal Reserve’s proven ability to build firewalls between financial distress and aggregate demand. New ways to borrow and to spread risk seemed to have little downside. More competition for investment-banking oligarchs from commercial bankers and insurance companies with deep pockets seemed likely to reduce the investment banking industry’s unconscionable profits.

It seemed worth trying. It wasn’t.

Analytically, we are still picking through the wreckage of this experiment.

Ill bet that your entire area of business somehow grew in response to a need for better information of mort tables etc.

Hardly worth a bet since you already know the answer and that would make it somewhat suckerish ne?


Damn! I didn't think you would catch that one

Well OK, but this is far too public - if you're really interested will have to reply by PM later this week.

For the first time this year, a generic Republican candidate and President Obama are tied in a hypothetical 2012 election matchup.

Deaf and blind dogs have to eat in order to stay alive - that's a minor detail eluding your otherwise brilliant financial analysis. Bachmann is right.


What makes you believe "staying alive" is the most meaningful thing to any human?............ destructive, asset-stripping variety that has been proposed here.


Destruction and asset stripping proposed here? By whom? How is a dead person (or dog for that matter) going to benefit from your "meaningful" policy?


I probably shouldn't drag this thread into the open again, but I may as well explain what my comments meant.

"Asset-stripping" was not meant literally. It was also the wrong phrase to use as a figure of speech. "Running down of assets" would have been more appropriate. When you pay people below-subsistence wages you wear them out as labour assets. You run them down both physically and mentally. What your country should do instead is develop those labour assets--those people. The rich should look on the poor as assets with long-term potential, rather than as things to use up in mc-jobs that add almost nothing to anyone's quality of life.

As far as my proposal goes that the poor should "starve themselves" rather than work at below-subsistence wages, I don't honestly believe that if the poor threatened that society would just let them die. (And if society DID respond by simply letting the poor die, then the poor would not have lost anything anyway, since their lives consist of pure misery and no real promise that that will change at any point in the future.)

In any case, thanks for taking my comments to be meaningful enough to respond to.
0 Replies